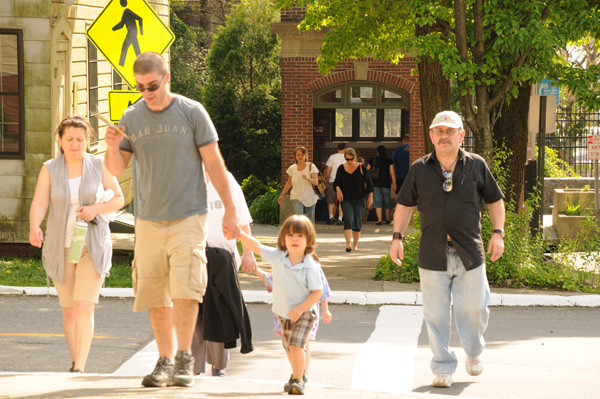 By Jon Cotner and Claire Hamilton

Claire: We board the 12:45 train at Grand Central. There are open seats, but we continue moving. Jon says there are seats in the second car. Later we conclude the first car had bad vibes.

Jon: As we approach Ossining, I think of John Cheever. I’ve heard there’s a prison around here. Claire’s head rests in my lap. I massage her hands.

C: We exit the train, then follow an old woman and her daughter into an elevator. We ride up and go back down to the platform. At this point I realize we don’t really have a plan for Cold Spring.

J: The first building is an antiques shop. I’d wondered if shops would be open. We listen to delightful violin music on a CD, and the dealer tells us he saw the same orchestra perform at Bard. “No reason to go to New York for concerts,” he says.

C: We ask about hiking. The dealer’s friend thinks we “bake on Breakneck Trail (our first choice), so he suggests the Foundry Trail. We’re told an annual Fourth of July parade is imminent “soon to begin along Main Street ” and I notice people lining the curb. We walk along Main. When I smile at children they’re eager to engage. Flattered, they also smile; their bodies become more animated. In the city, children tend to shrink away.

J: Suddenly we envision leaving New York, calling it dirty. Claire spots a real-estate window. We walk up to it. Most listings are over one-million dollars. Maybe we’d find a fixer-upper? We change the subject.

J: To a row of Cub Scouts carrying a banner I say: “Congratulations, young men.” Their leader tells them to thank me. Claire and I toss stray tootsie rolls into a crowd of kids who don’t see us.

C: I feel love when I see old veterans, and irritation when I see young soldiers.

J: An elderly shopkeeper in the Antique Center asks if I’m good with radios. Nobody has ever asked me this. The woman wants some FM music. I kneel and fidget with her boombox. Claire comes over. It’s on AM; we manage to switch dial to FM. We find the shopkeeper’s station.

C: Back on the street Jon and I follow signs to Pop’s Barn. Inside I see an illuminated make-up mirror I once owned as a kid. It’s vintage now, a special mirror for applying make-up. Modern consumption doesn’t value clutter. Jon uses an old mirror on a dresser to apply sunblock to his forehead and cheeks. Pop sits still.

J: Claire overhears young punks discussing sandwich options. We stop at a cafe before heading down to the river. My smoothie is disappointing – not even frozen fruit chunks, just a sweet, syrupy concentrate. Claire’s tuna-melt, slightly pink, oozes from the bread when she takes a bite.

C: We approach the cafe with a “Natural Foods” sign. I sense the staff’s furious haste. Jon grabs two bottles of water; I want a chocolate chip cookie. Salads are being made in the kitchen, and several customers have yet to begin eating, but when Jon asks for a bowl of lentil-spinach soup he’s told “We’re closed.” As we leave, we dart under a chain that means “Closed.”

J: After a short tunnel we enter the riverfront area. The broad sparkling Hudson weaves among green hills. Claire and I lie down in grass. It soon feels prickly (I forgot to bring a blanket). We look for something to do.

C: Twenty feet away is a giant inflatable battlefield. It supports two pedestals where jousters stand with Q-tip-shaped weapons. We can have two or three rounds for five bucks. I take off my shoes, climb onto the battlefield.

J: A woman snaps photos from different angles. While Claire hits me, I imagine what it’s like to be a local journalist here. I only block Claire’s jousts. I’m not hitting back. She gets frustrated and asks me to compete. Using my weapon like a ram I shove Claire from the pedestal.

C: That game is surprisingly boring. I hear a high-school band covering Nirvana’s “Smells Like Teen Spirit.”  Jon and I joke about the riveted groupies. Toddlers hurl themselves down a waterslide, grass sticking to legs. The band’s next song is “House of the Rising Sun” by The Animals. I wonder if they know what it’s about.

J: We leave the riverfront and find Foundry Trail. We see an incandescent bluejay.

C: We see a female cardinal, too. We’re holding hands. A plump squirrel jumps from our path to the brush with a hilarious bounce. I consider that for most of history people have been surrounded by buzzing insects and animal kingdoms, and that in nature, god seems an easier, less contractual idea.

J: Near the foundry we study historical signs. It’s hard to picture hundreds of workers producing their accurate cannons – the sounds, smoke, etc. It’s so quiet. The place has become a memorial.

C: Abraham Lincoln once visited this site. His elegance and deep gaze impress me. I see an inherent value in all the old bricks, spooked with past lives.

J: A bird with immense wingspan appears above us. Is it a hawk? Or an eagle? Claire thinks it would be appropriate to see an eagle on the 4th. But after a close look at its face, I conclude it’s a turkey vulture. But then I start doubting if there’s such a thing as a turkey vulture. And then we stumble upon an entire family of turkey vultures.

C: We scale a hillside to an unfamiliar highway. I’m sure we don’t have poison ivy despite that neither of us knows what it looks like. In the distance a sign reads “Welcome to Cold Spring. We walk toward the town center.

J: I see a deer. Claire doesn’t; it’s behind bushes. We approach slowly, clicking our tongues. Claire holds out spelt bread from our own feedbag. The deer salivates yet shyly stays put.

C: We follow the deer’s movements and see two spotted fawns. Jon asks if all fawns are spotted. I think so. All three animals stare at us.

J: Soon the deer flee. We resume our walk, but quickly get transfixed by a sign that reads “JULIA L BUTT FIELD MEMORIAL HO PIT.” At one point it must’ve read “JULIA L BUTTERFIELD MEMORIAL HOSPITAL.” It calls to mind my adolescence in suburbs. However, this prank is pretty clever, and I wished I’d had an iPhone so that I could send a picture of this altered sign to Claire’s sister Julia, and to my old friend David Buttlein.

C: Green hills surround us. I recognize a sloping lawn off Main Street, below a church. We lie on the grass. Jon admits he’s feeling randy. We kiss. Jon asks if we should buy a bottle of wine from a shop around the corner.

J: The charming French restaurant is closed, and Cold Spring Depot smells of chicken fingers, so we circle back.

C: We ask the hostess at Cathryn’s Tuscan Grill if there’s a wait. She says 45 minutes, but lets us sit at the bar. We read menus. I order cabernet; Jon, a prosecco. I make notes about our day.

J: Starving, I ask the bartender if we could have some bread. She tells a young busboy with a crewcut to prepare baskets. When he drops off the bread (two slices in oil), I say “Thanks brother.”  I’m trying to become his friend. I hope he’ll bring more. From having worked in restaurants, I know all about these busy, one-slice-per-patron nights.

J: Two cops outside Cathryn’s tell me the fireworks haven’t started. The sight of everybody moving down Main Street tells me the same thing. Claire likes how quiet everyone is. People look excited, but they’re not yelling or drunk.

C: A DJ plays music at a reasonable volume in the riverfront gazebo. I feel like dancing. Jon and I spin one another as a conga line snakes around us. Then a cute kid does a Russian kick-dance mixed with karate. He reminds me of my brother. We do kozachok-karate back at him.

J: All of a sudden fireworks begin. They seem to explode over the stage where the 14-year-olds jammed, so we go there. We pick our way among seated families and standing couples. Little babies are crying; dogs whimper.

C: Everyone else is quiet. From the stage comes a guitar-driven “This Land is Your Land,” which seems unnecessary. But I appreciate the sentiment, and experience gratitude. Fireworks light up boats on the Hudson.

J: I don’t have concrete thoughts while watching fireworks. Occasionally I watch people instead. I’ll notice everybody’s eyes turned in the same direction. I’ll wonder why as a species we don’t celebrate like this more often. And from time to time, after a particularly dazzling succession of bursts, I’ll conclude “This is the finale.” But I’m always wrong – the show continues.

C: We have thirty minutes before catching our train back to New York. I want to drink coffee in the old hotel with people coming in and out. First I use the bathroom. A Southern voice slurs: “You always forget my birthstone, Mother. It’s a PER-I-DOT.”

C: I’m sitting on an iron rail along the platform, listening to silence. Someone wheels a carriage with a black tail sticking out. Jon speaks and she smiles; I sense the woman is intelligent, and that she eats well and meditates. We talk about her time in Cuba. I want to pet the dog, so she lifts him up.

J: Angel is drowsy from valerian (the herb soothes bloodclots in his hindlegs). Claire rubs and scratches through damp, sandy fur. Each time she stops he nudges. Claire does it again.

C: The woman, whose name is Vanyska, recently lost her apartment in Manhattan. She’d been there for decades, and now crashes at a friend’s place because her landlord raised rent. Whenever possible she brings Angel into the country air. He moves better out here.

J: Train-bells sound. We were talking, and didn’t even see our train approach. Vanyska asks me to hold the doors. I sprint across the platform. Angel gets strapped in his carriage. Since Vanyska’s arms are full, Claire pushes Angel to the nearest car. Lifting him inside is a two-person job, so I grab the front of the carriage while Claire holds its back, and together we bring Angel into the train just as it starts to roll.

Jon Cotner is the co-author of Ten Walks/Two Talks, which combines a series of walks and talks around New York City. Claire Hamilton works as a trend analyst and brand consultant for WGSN. July 4, 2010 was the first time they visited Philipstown. Soon they’ll return. They live in Brooklyn.