Saturday June 19 the Hudson Valley Shakespeare Festival premiered its production of the Bombitty of Errors. A reworking of the Comedy of Errors, director Christopher Edwards has placed the story into the hip-hop world. Edwards has taken the basic plot and some of the language of Comedy and transforms the two sets of twins into MCs, two of which “land in a brand new town that’s got swing.” The other two are already residents. Through mistaken identity, comedy and mayhem ensue, culminating in the four brothers finding each other.

Jordan Allen-Dutton, Jason Catalano, Gregory Qaiyum and Erik Weiner play the two sets of twins and all of the other characters – – of which there are many. The many tranformations are made via changes in costume, voice and attitude. These rapid changes are made possible by two costume assistants without whom the production could not maintain its frenetic pace. Although not specifically listed in the program, they deservedly share a bow with the company. 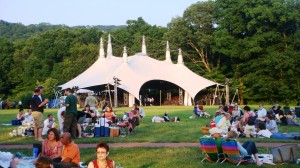 Mr. Edwards, who also serves as Associate Artistic Director and Director of Education for the Festival has sucessfuly placed this 300-year old play squarely into the 21st century. He describes Bombitty as a throwback to a time when hip hop practitioners focused on “moving the crowd.” In this sense they draw on the ages old oral tradition of storytellers. In this production Shakespeare’s words blend seamlessly with the lexicon of hip hop. For those of us older than a certain age, a brief glossary is provided in the program. In spite of what may be, to some, a foreign language, the production continues the Festival’s tradition of making Shakespeare’s word and poetry immediately accessible to the modern ear. 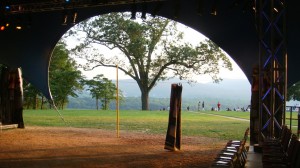 The words, action and music come at us non stop all orchestrated by a DJ who rules from a platform amidst the audience and who sometimes inserts himself into the action. The scenery is minimal, but no less apt as is consistent with Festival productions and performance with audience on three sides. Lighting, by Dan Scully, shoulders the load of moving the performers and audience through the time and space of the play. It moves non stop in tandem with the action. As a bridge over the intermission, the lighting continues to move, albeit at a slower pace, keeping the audience within that “town thats got swing.”