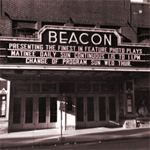 The theatre, originally opened in 1934, seats @ 8oo and features a full orchestra pit, dressing rooms and sizable front lobby. The Beacon Chamber of Commerce has requested that anyone in possession of historical reference of the interior or exterior of the facility that they are willing to share for renovation planning contact the production company. The company is withholding announcement of a name change until later in the month.

Spokesmen for 4th Wall Productions, managed by the team of Jim Brady and Christine Busacca-Vittorini (whose credits include numerous Broadway and Madison Square Garden productions as well as work for MTV and Nickelodeon), say the theatre will be home to a schedule of plays  and musicals, and expansion of their already existing summer theatre camp, improvisational theatre and live performances including concerts and independent movies.

4th Wall, which was formed in 1994 and has children’s theatre, cabaret and theater production credits throughout the Hudson River Valley, particularly Newburgh and Poughkeepsie. The company announced an open house at the space for next Saturday (July 10th, 2-to-8PM) to coincide with the Beacon art community’s Second Saturday program.