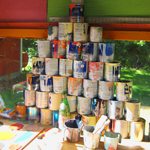 Habitats For Artists was initiated in the summer of 2008 and came out of the work of Cold Spring artist Simon Draper. He invited several artists to participate in the project and they took up residency creating small studio spaces working both in and outside the structures. The structures were made from used and recycled material, old lumber, windows and doors and unfinished art works.

Draper’s concept was for the artists to examine how they might redefine their creative space, needs and process in terms of how much more creative we could be, as a culture, if we used less materials, energy and land. 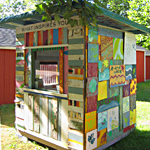 In the two years since it began, HFA in collaboration with ecoartspace has partnered with over twenty organizations and engaged with over fifty artists in various locations. Completed projects have taken place in Rhinebeck at Poet’s Walk with Scenic Hudson, in the town of New Paltz and at the SUNY campus, Kingston, Workspace Harlem, Urban Go Green NYC, Chashama in Times Square and Solar One on the East River Park, NYC.

Aside from the current project at the Hudson Highlands Land Trust in Garrison there are also new works installed at Common Ground Farm CSA at Stonykill, Burlington Community College in NJ and coming this September in Philadelphia along the Schuylkill River with the Destination Schuylkill Project. 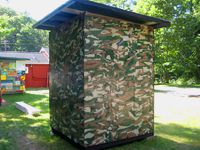 Philipstown residents can view several new HFA artists’ working in their studios behind the Hudson Highland Land Trust in Garrison.

5 thoughts on “HFA Artists Take Up Residency in Garrison”