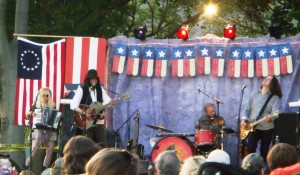 Community Day 2010 was capped off by a performance by Gandalf Murphy and the Slambovian Circus of Dreams. The Circus recently returned from a trip to England where they performed for over 25,000 people. The audience at Dockside was somewhat smaller but no less enthusiastic as the band began their set. Joining them for one song was a brass and woodwinds section made up of Haldane band students and they rocked the choruses. The group, a local favorite, played a mix of songs from Flapjacks From The Sky, The Great Unravel and selections from their soon to be released CD. Band leader Josiah cautioned, however, that the end of July release date might not be met. 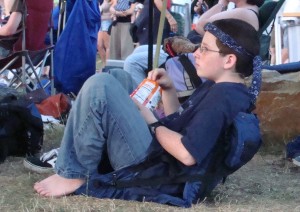 Listening the Circus of Dreams

Formed in Sleepy Hollow, New York in the late 90’s, Gandalf Murphy & the Slambovian Circus of Dreams now reside in Cold Spring. They have been singled out as Hudson Valley Magazine’s “Band of the Year” for 3 years running. On stage they create an enchanting atmosphere, using traditional folk instruments, tasty electric guitar and the distinctive singing and songwriting of Josiah Longo. Citing influences as diverse as Hank Williams, Dylan, Bowie, Incredible String Band and early Pink Floyd, Longo describes the band’s music as “punk-classical-hillbilly-Floyd”, a mental 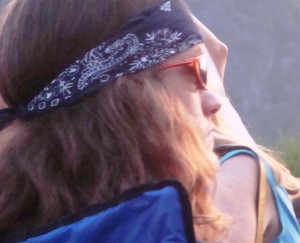 Flash from the past or what was old is new again

rollercoaster of whimsical, thought-provoking songs. The Circus’ live shows are where the real magic comes down, and Sunday’s performance, leading up to the fireworks display, was no exception.

HOW WE REPORT
The Current is a member of The Trust Project, a consortium of news outlets that has adopted standards to allow readers to more easily assess the credibility of their journalism. Our best practices, including our verification and correction policies, can be accessed here. Have a comment? A news tip? Spot an error? Email edito[email protected].