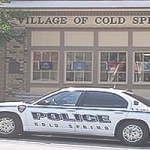 The Cold Spring Police Department had an eventful week from June 28 to July 4. It culminated in Community Day, on the Fourth, which involved large crowds, but created no problems beyond very heavy traffic.
The week began, however, on a sad note. According to a department news release, at 8:17am on June 28 the police went to the Cold Spring Fire Company on Main Street in response to a 911 call involving a 4-year old boy unable to breathe. The department said that, along with the child’s father, officers performed CPR until the Philipstown Volunteer Ambulance Corps could arrive. According to the CSPD, the ambulance corps transported the child to Hudson Valley Hospital Center, near Peekskill, where the boy was pronounced dead. The family, whose name was not released, was from Beacon and had been trying to get the boy to a hospital when the tragedy occurred.
On June 29 reports came in of larcenies from vehicles in the village. The police department said the investigation was continuing. No further information was available as of mid-day on July 7.
Finally, the department said that the Village’s Community Day festivities on Independence Day drew over several thousand visitors. Cold Spring officers received assistance from the Putnam County Sheriff’s Department directing traffic on the backed-up streets. Officer-in-charge George Kane is happy to tell everyone that there were no incidents to report related to the event. Officer Kane also reminded residents that “If you see something, say something.”
The Cold Spring Police are on duty 24/7 patrolling the village. While the police station itself is not staffed 24/7, officers can be reached for non-emergencies at 845.265.9111 or by calling 911 in the event of an emergency.