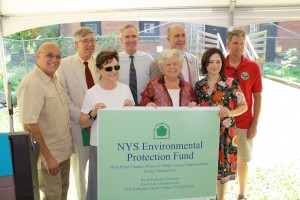 Joined by officials representing government from Congress to village hall, Scenic Hudson July 7 announced a $600,000 state grant for its West Point Foundry Preserve and celebrated new federal recognition not only of the preserve but of four other historic properties in Cold Spring, linked as the West Point Foundry Archeological Site.
The new recognition, announced at a news conference at the Foundry Preserve, gives the archaeological site status as something of “national significance” on the National Register of Historic Places, elevating it from its 1973 listing as holding “local significance” only.
In addition to the foundry ruins, the new designation covers Foundry Dock Park, the foundry’s wharf; the William Kemble estate, located above the current MetroNorth train station in Cold Spring, home of one of the two Kemble brothers instrumental in establishing the foundry; the Putnam County Historical Society & Foundry School Museum, which educated foundry apprentices and workers’ children; and the Chapel of our Lady Restoration, a Roman Catholic church opened in 1834 to serve the spiritual needs of foundry employees and used now for cultural programs. Along with the foundry preserve, Scenic Hudson owns Foundry Dock Park and the Kemble house.
Established in 1817 as an ironworks, the foundry closed in 1911, leaving buildings that became ruins as woods grew up around them. In its heyday, the foundry not only produced armaments for the U.S. military, including the Parrott cannon, instrumental in the Union victory in the Civil War, but agricultural, household, and commercial goods. A conservation and historical preservation group based in Poughkeepsie, Scenic Hudson acquired the property in 1996 and began clearing debris and making it more accessible.
Rep. John Hall (D-19th N.Y.) noted that the foundry ran partly on water power, reflecting a 19th century practice of using wind and water for irrigation and for powering mills and factories. “Here’s where hard work and ingenuity were matched together, the same kind of matching that we need to do today to help make this the greatest nation in the world. It’s important to remind ourselves” what is possible and of  “the values that brought us freedom we cherish and the prosperity we again seek,” he said. “Our country has moved away from free, renewable energy. Now we need to move back in those directions again.” 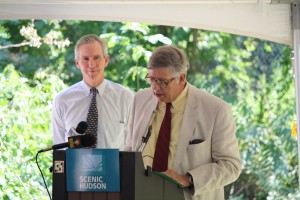 In officially announcing the $600,000 grant from the New York State Environmental Protection Fund, Wint Aldrich, deputy director of the state Office of  Parks, Recreation and Historic Preservation, said the money would help Scenic Hudson provide new visitor amenities at the WPF Preserve, including observation posts, an introductory kiosk, and trails.
Already, “what Scenic Hudson is accomplishing in this place is truly astonishing,” Aldrich said. He, too, cited the national historical importance of the site and called the foundry “the machine in the garden.”
Several speakers, including Scenic Hudson President Ned Sullivan, emphasized the vital foundry’s vital role not only in the past history but in encouraging today’s tourism, a crucial economic component of the Hudson Valley. “This really is about jobs,” Sullivan said, adding that just for the New York State parks, every $1 invested generates $5 in trade.
“When you have a historical site and tourism, you’re bringing jobs to the community,” said State Assemblywoman Sandy Galef, a Democrat. “And that’s a good thing” — along with all the educational benefits historic sites and institutions offer society.
Legislator Vincent “Vinny” Tamagna, a Republican who represents the district in the County Legislature, which he currently chairs, described the West Point Foundry Archaeological Site as “a new heritage campus we’ve created here” by linking the five properties. “This is a great monument to our past and a legacy for our future,” he said.  Tamagna remembered the recent past, too. Some 16 years ago, the foundry area was a mess, he said. “What Scenic Hudson has done is just incredible.”
“We really appreciate that here in Cold Spring,” Mayor Seth Gallagher said. He recalled that as a boy he played in the crumbling foundry buildings. Adding to the site’s recognition on the National Register “is not only good for Cold Spring, because we are connected to American history through this site, but important for the Hudson Valley and for the United States because it’s an important part of the formation of this country and of the preservation of the union during the Civil War.”
Scenic Hudson estimated the cost of its planned improvements, including explanation of the foundry’s 36-foot water wheel and gun-testing platform, as $3.6 million, of which it had secured nearly $2.3 million by July 7. It said it hopes to begin construction in 2011.