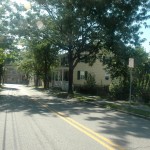 All is not fair on Fair Street when it comes to traffic. Late last summer, in a letter and appearance at a Cold Spring village board meeting, several Fair Street homeowners described the hazards posed by 18-wheelers rumbling down the historic street, lined by 19th-century homes.

On July 6, vehicle-related problem returned to the village board agenda, with a letter from two more residents — hemmed in by parking. As he did last year, Mayor Seth Gallagher promised that the village would take action.

In a June 21 letter, James and Kathryn Gordineer said they bought their house about eight years ago, when “parking on Fair Street was only allowed Sundays between the hours of 6 a.m. and 2 p.m. and Saturday [for] church.” Located at 24 Fair Street, Our Lady of Loretto Catholic Church has Mass — the weekly liturgy — on Saturday at 5:30 p.m. and at 7:30, 9, and 11:45 a.m., on Sundays.

Parking is bumper-to-bumper on Sundays

According to the Gordineers, things have gotten worse since 2002, and so has egress from their driveway. “Now that parking hours are no longer enforced on Fair Street, getting in and out of our driveway has become a difficult and unfair situation,” they said. “When cars are parked across from our driveway, it is nearly impossible to back out of the driveway and pull into it. The only way to successfully enter and exit our driveway is to drive up on the sidewalk and maneuver back and forth.”

The spectre of vehicles driving elsewhere but the street arose last Sept. 1, too, when Fair Street resident  Paul Lansdale said that on occasion a truck, taking up more than 1-lane wide, forced him to steer his own car onto the curb to avoid an accident. At the same session, another Fair Street resident, Susan Peehl, informed the board that trucks sometimes swerved across lawns or into trees. In one case, she said, a truck “dragged a tree 20 feet, hit another tree, and then halted because it couldn’t go any farther.” She attributed the problems in part to speeding and a bumpy road. 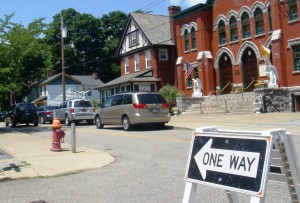 Temporary one-way sign in front of Our Lady of Loretto

In response, Mayor Gallagher proposed a crackdown on speeding, street and sidewalk upgrades, and, perhaps, more restrictions on trucks. Since then, “we did the paving adjustments, so the road has a smoother surface,” he said July 9.  Likewise, “the police have focused a bit more on watching the speed of vehicles coming through there.”

The Gordineers told him in their letter that neighbors “mentioned they had been working with you to address” the problems “and suggested we contact you to share our concerns as well.” They asked that “the village enforce parking regulations,” paint an X to prohibit parking from blocking driveway access, and widen the driveway apron.

Gallagher noted the persistent nature of the problems. “We had some other issues further down the street,” too, he told the board July 6. He said the village would be redoing Fair Street sidewalks and fixing curb cuts. “But we’ll need to be X-ing out where [visitors] can park, on Sundays even, because people do need to be getting out of their driveways.” Meanwhile, to assist the Gordineers, “we’re going to be starting this weekend with cones,” he said July 9. “And there’ll be no-parking signs across from them so they can get out.” From now on, he added, “that’ll be part of the routine.”