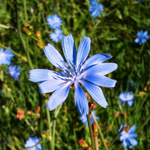 The early days of July 2010 in the Highlands have run the gamut from amazingly cool to blisteringly hot. In the garden, the pinks and whites of spring roses and peonies have given way to the cool purples of early-summer lavender, hydrangeas and butterfly bush. And even the deep reds of the blossoming bee balm contain traces of an unexpected blue that’s echoed in the clear sky, and laughs in the face of the high-summer heat that has descended on us.

My favorite seasonal specimen of this hue is of an even more common provenance. You’re seen it: a weed glaringly abundant on the roads where we drive or bike, the common chicory (cichorium intybus) is a wild, perennial herb that scatters its starbursts of periwinkle flowers on gangly, unkempt stalks, set off at strange angles, tightly clasped at the base by a crown of hairy, saber-like leaves not unlike the dandelion’s. Known as the “blue dandelion” in Europe, it is regularly misidentified as cornflower due to the shape and coloring of its flowers. It is also known as blue sailors and succory.

Poetically, this blue bloom (“Blaue Blume” in German) is an important symbol of Romanticism and stands for desire, love, and “the metaphysical striving for the infinite and unreachable” (sort of like those cool days that seem so far away now.) As a weed Garrison resident and master gardener Marilyn Young also appreciates it’s unexpected effect and says that although it’s troublesome it’s not really invasive, adding, “I just love the way it looks with Queen Anne’s Lace.”

Also as usual with the commonplace, the refined progeny of this plant are many-the foodies among us pay dearly for endive and radicchio, two of the more costly cultivars grown for their bitter leaves. (The starchy root is also widely cultivated, although not as preciously, as a coffee substitute hence another common name coffeeweed.)

Like it’s cultivated cousins, wild chicory leaves are bitter and can make a very simple summer salad not unlike arugula. If you want to try any of this sort of culinary adventuring, I suggest you harvest the young and smaller leaves from the “free-range” plants in open fields and not those close to highways more likely to be contaminated by road dirt or worse. Wash the leaves well and dress.

Cooked, wild chicory has both Italian and Greek pedigrees: preboggion (Italy) and horta (Greek) are the continental appellations for what folks in the South would call “a mess of greens”—usually a combination of the plentiful summertime bounty which includes chicory, dandelion greens and the like. The combinations are endless but the preparation is almost universal: Wash a few handfuls of what’s available; blanch to remove excessive bitterness (a good trick to remember) and drain. Finish by sautí©ing with garlic and a pinch of red pepper flakes in olive oil. (Anchovies are a common addition for those who like them. Sicilians might even ad raisins.) A splash of lemon or vinegar for brightness is a nice finish.

This makes an excellent accompaniment for any grilled meat or fish (or vegetables), or roughly chopped, tosses well with pasta or tops a pizza. There’s a super Italian variation on the simple sautí©, which is topped with a fava bean (or chick pea) puree and called “mud and grass,” which might SOUND funky but is sublimely delicious.