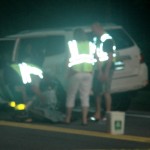 One driver was killed and another suffered injuries, though relatively minor, in a head-on collision about 4:30 p.m. Friday (July 23) on Route 9, just north of  the intersection with South Mountain Pass, according to New York State Police. Officers knew the identity of the dead male driver but could not release it because his family had not yet been notified, State Police Investigator John Shaughnessy told Philipstown.Info on the scene about 7:30 p.m. The name of the other driver also was not immediately available. 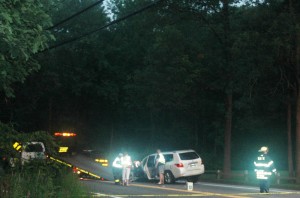 Three hours after the incident, the stretch of Route 9 where it occurred continued to be closed. Shaughnessy said the road would probably be opened about 8:15 p.m., after the rest of the wreckage had been cleared. A white station wagon, heavily smashed in on the driver’s side, remained by the side of the road, facing north. Shaughnessy said the vehicle belonged to the driver who survived the accident.
The Continental Village Fire Department joined the State Police in responding to the accident, along with the Putnam County Sheriff’s Department and a Department of Environmental Conservation police officer, he said. Fire trucks and other emergency vehicles remained on the road, along with at least one large, flatbed wrecker truck approximately three hours after the incident occurred. Shaughnessy said the cause of the accident was under investigation. 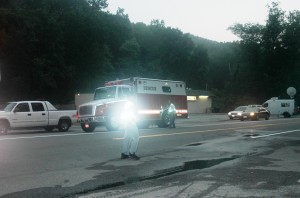 Traffic delays as Route 9 is closed.