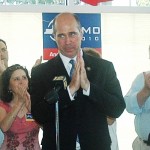 Rep. John Hall launched his re-election on Saturday, July 24, asserting that “somebody needs to stand up here and speak the truth” about tough issues, including federal spending, climate change, and unpopular votes. A Democrat first elected in 2006, Hall serves the 19th New York Congressional District in the House of Representatives in Washington. He addressed a packed room in a party headquarters in Mount Kisco and then announced he was “going out” — on a sweltering day —  “walking and canvassing to talk to people about what’s important to them.”
Speaking indoors for several minutes as at least 100 supporters thronged around him, he declared “I’m proud to have been serving in difficult times.” Digital cameras clicked, TV crews captured his remarks, and a sign waved: How good is John Hall? Ask our veterans.  Hall chairs the Subcommittee on Disability Affairs and Memorial Assistance, part of the House Veterans’ Affairs Committee. He noted the popularity of some of his House votes, such as one to give women more clout in gaining equal pay for equal work. Yet, he added, “some of the votes I’ve taken have not been so popular,” among them the autumn 2008 legislation to rescue the financial sector. “I was not overly eager to vote to bail out” huge banks and a Republican president, he acknowledged. But with the Bush Administration and outside experts urging emergency action, Congress opted to keep the country from “being dragged over the cliff. We almost were anyway,” he said. He cited the prevailing fear that not only large financial institutions but ordinary Americans would have been ruined — “suddenly your bank account could be inaccessible” as small banks failed, “if Congress had not done the right thing regardless of partisanship.” 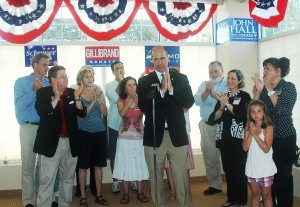 Rep. John Hall shares a round of applause with supporters at his 2010 campaign launch.

Now voters, too, face difficult choices, given recent initiatives by Congressional Republicans, he said. “Their plan is to go back to the same policies of the Bush Administration” that led to the worst recession since the Great Depression, Hall said. One House Republican leader even broached “the idea that we would fund wars overseas on the backs of our seniors” by cutting Medicare. He said his Republican opponents in the 19th have expressed opposition to “earmarks “— federal funds designated for specific purposes. However, Congress’ authority includes power over appropriations, including funds for local projects, he said. “That’s my job.” He mentioned federal funds used for public health improvements in the 19th District, such as restoration of Peach Lake.
Failing septic systems were increasingly threatening the lake, shared by Putnam and Westchester Counties, and with Hall’s support last autumn the Towns of North Salem and Southeast together got $6.9 million in federal funding to build a water treatment facility. Similarly, he helped convince his congressional colleagues to provide $400,000 to clean up Lake Oscawana in Putnam Valley as part of federal agricultural and rural development allocations and obtained a $189,525 federal grant for the Mahopac Volunteer Fire Department for better equipment.
“New York pays much more in taxes than we get back,” he said. “If we don’t get those federal tax dollars back” in some form for necessities like unpolluted water, the common good will suffer, he said. Whether it means paving roads, building clean water systems, or supporting the military, he said, “no individual will do this. There are certain things only government will do.” He promoted continued improvements in mental health for soldiers returning from war zones. He also said his office had helped area veterans cut through red tape and obtain a total of $1.5 million in various benefits unfairly denied them previously.
Likewise, he proposed “the wisest possible use of our military strength” to allow the United States “to disengage from the conflicts we’re in as quickly as we can.” While currently supporting President Obama’s policy in Afghanistan and Iraq at present, “I’m watching like a hawk,” he said. On the environmental front, he called for more attention to climate change, describing as symptoms of global warming a series of recent floods, hurricanes or tornadoes in unusual seasons and places, and 2010’s dubious distinction so far as the hottest year on record.
Whatever questions the country faces, Hall said, Republicans and Democrats in Congress should engage in constructive dialogue. “What we need to have is reasoned discussion about what our priorities are and how we are going to pay for them,” he said. Dottie Gilman, Philipstown Democratic Committee Co-Chair, said she looks forward to campaigning again for Hall. “He’s dedicated, he’s sincere,” she said. “He’s a good candidate for re-election.”
Republicans Nan Hayworth, a Westchester opthalmologist, and Neil DiCarlo of Brewster, who works for a financial firm on the floor of the New York Stock Exchange, also seek the 19th District seat.

Rep. John Hall shares a round of applause with supporters at his 2010 campaign launch.