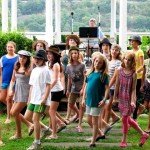 The kids attending Sunday’s Summertime Family Soire Depot Theatre Benefit weren’t just singing songs from the show they had just appeared in, they were also singing the praises of their just-concluded “Bugsy Malone” camp – one of several theatrical/acting programs conducted each summer by Philipstown Recreation.  These popular, frequently sold-out programs work that “let’s put on a show” formula to the max: four weeks, 30 kids, a musical extravaganza with full sets and costumes, a teenage director and assistant directors: ready, set, sing, paint, hammer, sew, memorize, find props, get scared, get over it, go!

Sunday’s event celebrated these “Depot Youth Players” by putting them front and center at a casual, relaxing event held at Garrison’s Landing.  Mere sprinkles from above couldn’t dampen the enthusiasm of the Bugsy gang as they performed several high energy group numbers from their show.  They were followed by a few cast members from this weekend’s teen production of “Thoroughly Modern Millie,” giving a preview of what looks to be another winning show.  The obvious adulation of the younger children for the teens, a couple of whom had served as director and assistant director for Bugsy, was as fun to watch as anything else, and is emblematic of the strengths of the program.  As Liz Richter, a 16-year-old, who has been involved with theater since childhood, and who served as assistant director, put it: “I’ve become so close with all the kids.Ã Now I know what it’s like to teach students how to do what I like doing.  They have that drive and want to do theater so badly, and I had that drive.  It’s amazing to hear these great singers who are only in fourth to seventh grade.”  Illustrating these bonds, the kids sent a special verbal valentine out to another young assistant director, Jeff Rizzi, who had been injured in an auto accident (he’s doing well now) and was unable to attend: “The whole gang wanted to send you a get well card, but we couldn’t since we’re not a whole gang without you.”

Echoing these thoughts from an adult perspective, Mary Rice – mother of 11-year-old Leandra – star of this year’s show and veteran of several years of these programs, said “To me it is very valuable to have high school students as mentors to the younger kids, seeing them as director and assistant director.”  Her daughter piped in “The counselors make it really fun because they’re so enthusiastic.  They tell us to go for it and don’t be afraid.  What I’ve learned is how to handle the director’s criticism, not to cry and get upset. You have to transform yourself.”  Mary Rice added that it was also important to “have kids experience all of the aspects of the production, from the design to seeing what a producer does, surrounded by professionals.”

In keeping with Bugsy Malone’s motif of Prohibition-era gangsters, molls and turf wars, the most popular activity of the afternoon for the kids was the pie-throwing “booth” which saw non-stop action from eager hurlers. Their parents enjoyed some refreshments and post-Prohibition libations, and cheered on the young actors.  Several spoke of the benefits that the theater program had brought to their children: “Confidence,” said Kathy Marino, “we are so lucky to have these programs.” “The quality of the result is amazing, yet they have so much fun,” added Elise LaRocco. Suzanne Dow concurred, “Every day she came home happy. The kids learn about cooperation, patience, a lot of virtues.”

Claudio Marzollo, Chairman of the Recreation Commission, and President of Philipstown Performing Arts, which works with Rec to sponsor the Depot Theatre, was among those attending. He commented “This is one of the four things: music, film, adult theater and children’s theater, which make up the ‘4-legged stool’ at the Depot.”  Looking back at the program’s past and future, he said, “My kids were interested in the theater and we didn’t have this when they were young, but I’m expecting a grandkid in a few weeks and I’m glad that this is there for him. Seeing some kids develop within the program, starting out as little kids and now directing – watching that kind of growth is terrific.  It’s amazing how far we’ve come in 14 years.”

Rec’s Depot Theatre programs continue in August with a workshop for children in grades 1 to 3, and start up again later in the fall, with a production of “A Christmas Carol.”  Registration for the summer programs generally takes place in April, and frequently fills up a short time after the phone lines open.  For more information, call Rec at 424-4618 or visit philipstownrecreation.com or philipstowndepottheatre.org.

Kyra Moscowitz, who has been doing this program for about 5 years, pretty much summed it up: “I make so many friends.  Plus, I get to play so many characters, from really sweet to really obnoxious.”  Which ones are more enjoyable to play?  Said with a gusto she might not have displayed as a theatrical beginner: “Oh definitely, the really obnoxious ones!”

2 thoughts on “Summertime, and the Singin’ is Easy”