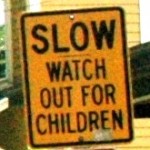 Cold Spring’s driving problem dominated the village board agenda again last night (July 27), when Church Street residents sought remedies for speeding on a block where 20 children live. A delegation of about half a dozen presented a letter urging village authorities to install speed bumps and signs to deter motorists who ignore the law and “barrel onto Church Street at dangerous speeds” and “that put our children in harm’s way. The situation has become more perilous every day,” according to the 21 signers of the letter. Church Street runs from Northern Avenue to Main Street, with a posted speed limit of 15 miles per hour.
Cars “are going very, very fast on Northern and whip around the corner” onto Church Street, Kacie Grossman told the board. “It just happens all day long. I want everyone to know my street is not a good short cut.” “It’s a really dangerous block,” Leo Saks, another resident, concurred. He recommended Stop signs on Northern Avenue, separation of signs so they become more visible, instead of being affixed to the same pole, and painting of large white letters with traffic-control messages on the street. “We’re asking drivers to recondition years of habit,” he observed. 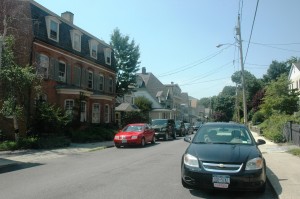 With parking on both sides, “there’s no visibility whatsoever,” compounding the hazards if children dart into the street, Mayor Seth Gallagher pointed out. “It’s even more important that people drive slowly.” He promised to confer at the site with George Kane, the officer in charge of the Cold Spring Police Department and to install better signs. “We could get those in pretty quickly,” he said. He also suggested configured curbing to slow vehicles making turns. But he said state law forbids speed bumps on public thoroughfares, limiting them to private roads, including those belonging to a school district like Haldane. “I wish there were something else we could do,” he said. 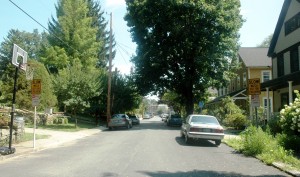 In a note the mayor read aloud, Officer Kane, on leave this week, pledged intensified efforts “to enforce the vehicle and traffic laws of the State of New York [and] the village. The safety of residents as well as of the motorists is of great concern to my department,” Kane wrote. “I do not want to see this problem continue or escalate.”
Trustee J. Ralph Falloon proposed raised crosswalks and Trustee Airinhos Serradas noted that Fishkill uses them in its historic area. Village officials seemed to take some immediate steps in response to the concerns. A Cold Spring Police car parked mid-way up Church Street at 2:30 on Wednesday afternoon and a village staff member said Trustee Bruce Campbell had contacted the New York State Department of Transportation on Wednesday morning to explore options for the village.  In recent months, residents of Parrott and Bank Streets, Fair Street, and Marion Avenue also have complained about traffic behavior that threatens neighborhood safety.
Another recurring issue –fate of the former Butterfield Hospital property — also returned to the Village Board’s agenda on Tuesday. The mayor announced that earlier in the day he had met with State Assemblywoman Sandy Galef, County District 1 Legislator Vincent Tamagna, County Executive Robert Bondi, Philipstown Supervisor Richard Shea, and Nelsonville Trustee Anthony Merante to discuss the site, which the county proposes to buy from its private owner. “It’s moving forward over at the County” with various initiatives underway “to make it a reality,” Gallagher said.
Local senior citizens representative Joseph Immorlica, who also serves on the Cold Spring Planning Board, presented a petition with 335 signatures from throughout Philipstown asking government officials to develop the Butterfield property as a community headquarters. They proposed the site house a senior citizen facility, nutrition program, youth center, and office of the aging, as well as the Cold Spring, Nelsonville and Philipstown Justice Courts, village and town offices, the Cold Spring Police Department and a Putnam County Sheriff’s branch, the Cold Spring Fire Company, and the post office.
Taking up other business, the board unanimously agreed to allow Village Justice Thomas Costello to hire his wife as his clerk. “It is an awkward thing,” the mayor acknowledged. However, he said, “she’s been helping him without pay” since the departure of the judge’s last assistant and has the requisite legal-affairs background. Gallagher said he had interviewed the other applicants for the position and although one was promising, she lacked the legal training. Costello had already received permission for the hire from the New York State Unified Court System.
Before the board retired into executive session to interview a prospective police officer, Serradas asked that the village review developments at the Cold Spring dock, where, he said, youngsters have been jumping into the water and apparently climbing up on tires attached to the side of the dock. Some of the tires are now missing, he told his colleagues. “We need to do something.”
“I’ll check on them,” the mayor replied.