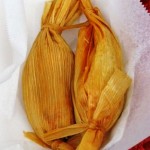 As you taste the delicious fillings inside of those tempting corn husks at the Cold Spring Farmers’ Market you can be grateful that the muse didn’t come to Lisa Krivacka during a bad patch in her life as a fine art painter. Lisa, the owner of Block Factory Tamales, came to tamales in one of those roundabout, serendipitous ways which often seem to interrupt things like career paths.  A couple of years ago, she was living a bit north of here, prepping for a gallery show in Chelsea (in Manhattan.)  It was January, and she was housebound and felt if she didn’t find a way to get out, her well of creativity could dry up.  Rewind to the sixteen years before that which she spent living in  New York City.  She often felt as if she was the only person throwing dinner parties, and she came to the realization that she spent so much time deciding what to make and in preparation, that she never had fun at her own parties.  Somehow, the notion of tamales came to her, and she began a trial and error process with ingredients she could prepare beforehand for those dinner parties. 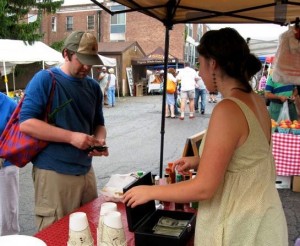 Out of the blue, she decided to pitch the idea of tamales to the organizers of the Rhinebeck Farmers’ Market, not knowing how competitive it was and how infrequently slots opened up.  Luck smiled upon her and she was accepted. She approached the first day with low expectations, but wound up selling all she had brought within 15 minutes.  Soon she was asked to sell at the Woodstock market as well. One thing led to another and she found herself at a chili-cook-off where she met Steve Bates. The co-Manager of the Cold Spring Market, asked her to be a vendor at the Garrison Arts Center: Arts and Crafts Fair last August.  She now finds herself a lapsed painter, but three markets strong and in the throes of building a tamale empire!
Cold Spring is “one of my strongest markets —I really like it there” Lisa said. She visited the first week and hopes to return soon.  Running the stall is Cold Spring’s Alex Milner, a Lehigh University student.  This is not just a turn up and man the fort kind of job.  Once a week Alex drives to Germantown to pick up the ingredients and work in the kitchen for a few hours.  She returns home and stores everything. “It’s a process,” says Alex and “people really seem to like them.”  Some people don’t know what they are and want to see them, while others are ecstatic, especially a friend from California.  People often ask if they should “eat the exterior.”  The best thing about being a vendor at the Market: is “seeing people I know, early in the morning.” 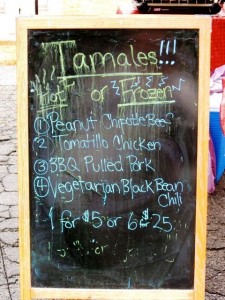 What’s on the menu today?

The tamales are gluten free, and the ingredients are sourced locally whenever possible.  Lisa uses Clinton Corners’s Wild Hive Corn Mesa mix, meat from Northwind Farms in Tivoli, and produce from many local, small farms, as well as some larger farms. She also takes advantage of seasonal freezing. She hopes to be introducing gazpacho soon, with tomatoes from small farmers.
And as for the painting—Lisa is taking a pause and building the business.  Tamales trump art, for a while, anyway.

One thought on “A Creative Dry Spell Led Her to Tamales”