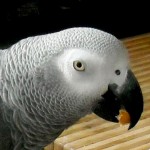 From Garrison to the Bronx, the saga of Mario, the missing parrot, took a happy turn on Thursday when he turned up in the Bronx — sheltered by a woman who thought he might have been her own lost African grey. Mario’s owner, Suzie Gilbert, who said she “must’ve’ walked 100 miles and laps around the house” and surrounding area searching for her errant pet, expects to be reunited with Mario this weekend, allowing his New York City savior  time to say good-bye after more than a week with him.
Gilbert, a bird-of-prey rehabilitator and author, said Mario’s adventures began on July 18 as he enjoyed the outdoors from his aviary in her yard, alongside his step-sibling, a small macaw. Their dinner attracted an interloper — a squirrel after birdseed. Breaking through two layers of chicken wire, the squirrel invaded the enclosure. The macaw stayed put, but Mario panicked and used the squirrel’s entrance as his exit. Up a tree he flew, some 40 feet high, Gilbert told Philipstown.info on Friday. He refused to come down. That night a frustrated Gilbert could hear him calling out, “wanna go inside; wanna go inside.” The next morning, he had disappeared. 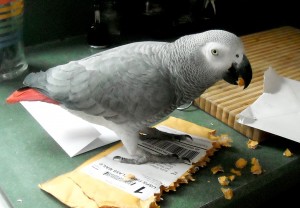 Mario, an African grey parrot, has been found and is on his way home

About three days later, while Gilbert searched frantically for him, Mario found his first rescuer. Old Highland Turnpike resident Patricia Burruano let her dog out onto her deck and noticed something on the railing. She took it for a stuffed animal or similar toy. “I didn’t think it was real,” she said. Then “the dog and bird went nose to beak” and she realized this “very pretty” creature was a live parrot, if a rather traumatized one. “I held my hand out and he climbed on my finger,” she said. “I had no idea where he came from.” She brought the bird inside, but because she has cats, put him in a separate room and then into a spare animal cage, giving him water and “a lot of Ritz crackers. He was very hungry.”
She also called her veterinarian’s office, in Cortlandt. The vet’s staff maintains a list of missing pets and knew of woman named Marie in the Bronx missing a parrot — matching the description of the one Burruano had taken in. The vet’s staff called Marie and the two women got in touch.  “She came up and spent quite a lot of time,” Burruano recalled on Friday. “She wasn’t convinced it was hers.” Yet the parrot on Old Highland Turnpike did look much like Marie’s buddy, who had been missing a month or more. So she took him back to the Bronx, until she could sort things out. “She made it quite clear she didn’t want someone else’s bird,” Burruano explained.
Once he was safely in the Bronx, Marie spent at least one night sleeping in a chair next to the bird cage, keeping the door open, so the parrot would feel at ease, for he seemed very shy. Meanwhile, Gilbert had been searching, hanging posters, and fielding calls about suspected Mario-sightings, at the Cold Spring MetroNorth station, among other places. She likewise put information on the internet and alerted Philipstown.info. And she worried. “He’s hawk food on the wing,” she said. Fearing him dead, “I actually found myself looking for the pile of bloody feathers.”
So matters remained until Thursday, July 29, when Marie learned of a parrot missing from Garrison. She tracked down Gilbert and they concluded that Marie’s visitor must be Mario. Marie and her husband “have been treating him like gold,” Gilbert said on Friday. “I’m so glad this had a good ending. I’ve got my birdie [coming] back.” She also praised Burruano, who “really saved his life. This is the best of small-town living,” she said. “It makes me happy to live here — even more than I am normally!”

5 thoughts on “From Garrison to the Bronx, Saga of Mario the Missing Parrot Ends on Happy Note”