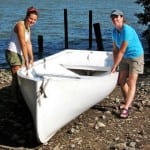 It was one of those perfect days which grace our summers a mere handful of times. Or, if we’re talking about this particular summer, perhaps it will be the one and only perfect day. On this ideal Saturday morning, with its slight breeze and moderate warmth, the notion of rowing in the Hudson confirmed that all was right in this part of the world.

Crossing Dockside, the shad boat perched enticingly at the shoreline. In the distance, a woman was pulling equipment out of a temporary structure at the back of the grassy area. Another woman approached, a young one, cell phone in hand. Her swift evaluation: “Tide is going up, but the winds are picking up and blowing south and they’re causing more whitecaps, just look at them. High tide’s at 11:45 – we might make it down, but coming back would be too hard.” 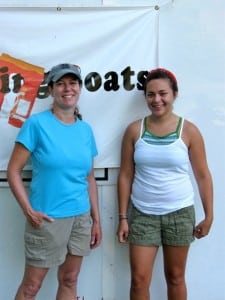 Lynn O'Malley (l) and Danielle Bassignani outside of the BBBB shed.

Danielle Bassignani may have put a damper on the proceedings, but she proved her mettle as a guardian of safety. Her knowledge and assessment of the conditions called a halt to that day’s row, but inspired confidence in the program she was in charge of – community rowing in Cold Spring. Danielle, who will soon enter her sophomore year at the University of Vermont, is the product of a program which dates back to 1998 when Trevor Harris, working with Outward Bound, received a grant from Grinnell College to conduct a boat-building workshop with students at Haldane. According to Building Bridges Building Boats (BBBB) board member Lynn O’Malley, the other woman at Dockside, consideration was being given to establishing an “alternative’ high school program at Haldane to channel the energies of those kids who didn’t necessarily throve in a mainstream academic classroom into out-of-classroom, but substantive learning. “Trevor took a group of kids every day to Pam Colangelo’s garage where they built the shad boat. The ‘Storm King’ [another craft, still in use] was built in the little gym at Haldane.”

Soon Scenic Hudson offered the group space at the West Point Foundry. Per Lynn, “One of Trevor’s activities was to start community rowing. He got the kids involved in being guides and did some service projects with them. The community rowing began in 2000, but it has not been continuous; it is being re-started this year after a break of several years.” 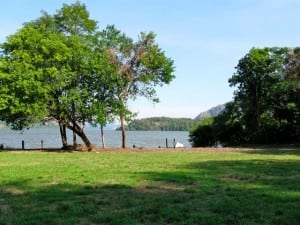 The serene beauty of the community rowing launching site at Dockside.

Building Bridges Building Boats, now directed by David Hardy, has extended its programming. The boat building for kids morphed into family boat building workshops. In 2003, BBBB began conducting popular Summer River Workshops for kids, where they acquire rowing techniques, learn about maritime safety and spend their days rowing to nearby spots. The kids who participate are dubbed the “River Rats” and typically participate in other activities such as the American Star Races in Manhattan (held during the winter,) the Clearwater Festival and Beacon’s Strawberry Festival. They also take part in special local events such as the Float Your Boat flotilla hosted last year by the Garrison Art Center as well as the Shad Festival.

The community service component is essential to BBBBs mission. This past weekend, there was no community rowing because the boats were being used by BBBB rowers participating in the Great Hudson River Paddle, an annual 8-day, 105-mile kayaking and camping trip from Albany to Peekskill. BBBB rowers of all ages participate along with the kayakers.

A veteran of several GHRP rows, Danielle became involved early through her friendships with “The Boating Gang” which she describes as “a big part of who we are” and has paid her rowing dues through years of participation in most of the BBBB events. She declares that “anything boating-related is the core of my summer. Most of my Hudson River knowledge comes through word-of-mouth on the river. The Hudson runs through my blood now; I can’t be away from it for long.” Danielle is majoring in environmental engineering and she wrote of her boating experience in her college admittance essay. One of the aspects of boating that she enjoys is the interaction between different generations. “For a couple of years it was all people my age, but now it’s older and younger; there’s a spot for everyone and that’s what makes it great.”

Lynn O’Malley had a taste of this meeting of the generations when she was “the adult” on one of the boats used in the GHRP several years ago. “When you’¢re on a boat for five days with a bunch of kids, by the time it ends, you know them!” Lynn got involved with the BBBB board when a friend asked her to assist with the organization’s first fundraising event (an outdoor gear fashion show, remembered fondly as “hilarious” by attendees. 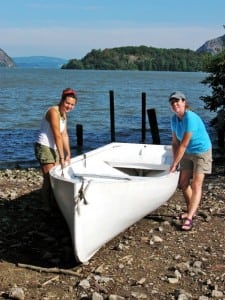 Danielle Bassignani (l) and Lynn O’Malley in preparation for rowing.

An aspect of BBBBs mission, which appeals to Lynn greatly, was working with most of the nonprofits which own land within some distance north and south of Philipstown to generate better public access. These groups include Little Stony Point, Audubon, Constitution Island and Scenic Hudson. County Legislator Vinny Tamagna was also involved. A series of meetings over two years resulted in a report, which is now an Appendix to the Town Comprehensive Master Plan. The permanent usage of the Dockside site is currently under review, but the idea of using a portion of it for community rowing is well-supported and for now the rowing is authorized through a permit granted by the state. Erosion control at the shoreline looms as another future concern.

The rowing takes place on boats called Whitehall Gigs, thought to be named for the street in lower Manhattan which was the launching point for gigs used to ferry passengers and materials from large ships in the harbor to shore, beginning in the 1820s. Reports have them being used by ships’ chandlers, port agents, insurance representatives and even newspaper reporters. The Whitehall Gigs were built for both speed and stability. Speed was needed because the boat which reached the ship first got the job. The BBBB boats, which are 26 feet long and hold four rowers plus a coxswain and dead weight, underwent multiple tests for stability. In the week before community rowing began, according to Danielle, “we tried for days to turn them over.” With the two boats, community rowing can involve a maximum of eight passengers and is recommended for adults and for children no younger than four. If bringing a very young child, it is necessary to bring a toddler-sized life jacket. Life jackets are provided for older children and adults. 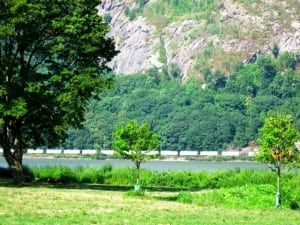 Rowing will begin again, conditions permitting of course, on Saturday August 7. To sign up or to ask any questions, send an email to [email protected] You may not get an immediate reply this particular week, as the BBBB folks are out in force rowing down the Hudson with the Kayakers. They are all due in Cold Spring on Wednesday morning August 4. Traditionally there has been a big welcome turnout for the boaters, so if you are free, head down to Dockside mid-morning to cheer them on. You’ll probably notice a larger than usual number of Wednesday visitors as the boaters enjoy the charms of Cold Spring. Be sure to welcome them to town!