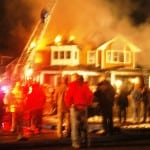 A recent report on the Cold Spring water system’s fire-protection capability reveals dire needs and decades of inactivity, despite repeated warnings of deficiencies. The report, completed in May, outlines recommendations to address the dangers. Topping the list: cleaning and lining the bulk of the 115-year-old, 10-inch main transmission pipe, at a cost of $930,000. Currently, the report warns, “adequate fire flows cannot be delivered to most areas of the existing system,” which serves the villages of Cold Spring and Nelsonville and parts of Philipstown. “The ability of the distribution mains to allow water to flow has been significantly reduced because of deposits formed on the pipe’s interior surfaces since they were originally installed,” the report states. “The majority of the pipes in the system are comprised of old, unlined cast iron” and “major distribution system improvements are necessary in order to improve fire-flow deliveries.”
The village installed the water system, including fire hydrants, in 1894-1895. With a reliable water supply available for the first time, the Cold Spring Fire Company formed in early 1896. The water comes from reservoirs, created from lakes in North Highlands, which feed Foundry Brook. The stream in turn flows down to a treatment plant and on into Cold Spring.   Prepared by Ronald J. Gainer, a consultant with an engineering firm in Pawling, the new report updates a 1992 study, which Gainer also helped to draft. At a June meeting, the Cold Spring Village Board briefly discussed the report, commissioned after a Christmas Eve 2009 fire destroyed a large home on a property straddling Cold Spring and Nelsonville. 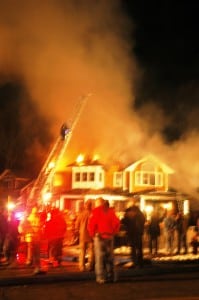 A disastrous Christmas Eve fire underscored the need for water-system improvements in Cold Spring and Nelsonville.

Mayor Seth Gallagher told Philipstown.info on Friday (July 30) that Cold Spring is pursuing the possibility of assistance from the New York Drinking Water State Revolving Fund to support the pipe cleaning and lining. The fund offers low-interest financing to underwrite water infrastructure improvements; it gives zero-interest loans in situations of particular hardship.   “We really haven’t done anything for close to 100 years” about the pipes, Gallagher said.
Gainer’s report cites the professionalism of the Cold Spring Water Department and points out the substantial water-quality enhancements of the 1990s when Cold Spring built its treatment plant and installed two 297,000-gallon storage tanks along Fishkill Road, several miles from the village. It also added an emergency-use connection to the Catskill aqueduct, which supplies New York City. Nonetheless, the aging pipes remained in place and today’s problems date back at least 26 years.

According to Gainer’s recent report, tests in 1984 found the system “incapable of providing the needed fire flows at any of six locations tested,” while 1999 testing “confirmed that the needed fire flows recommended by the Insurances Services Office (ISO) could not be delivered at six of the seven locations tested.” The ISO evaluates municipal fire protection systems. The Christmas Eve fire “highlighted the water distribution system’s inability to deliver needed fire flows along the village’s main transmission” line, the report said. One of the problems involves the Haldane Central School District.
“For the Haldane school facilities, ISO has recommended fire-flow deliveries of 3,500 gallons per minute,” Gainer wrote. However, he said, at the intersection of Mountain Avenue and Orchard Street, near Haldane, the 1999 testing showed the flow was 610 gallons per minute, or 2,890 gallons short of the recommended amount.
Gainer explained that the ISO calls for fire flows in single-family, detached-home neighborhoods of 750 gallons per minute and 1,500 to 2,500 gallons per minute for areas with attached, residential units.  For commercial and institutional districts the fire flow “can be as high as 2,000 gallons per minute or more,” he reported. He also noted that the 1999 tests found that at Main and Garden streets, where the recommended flow is 3,000 gallons per minute, the flow was 710 gallons per minute, and at the Chestnut Ridge senior housing complex, where the recommended flow is 900 gallons per minute, the actual flow was 290 gallons. In Nelsonville, at the intersection of Bank and Division streets, with a recommended fire flow of 2,250 gallons per minute, the fire flow reached only 410 gallons per minute, Gainer wrote.
To correct the situation, “the cleaning and lining of the existing 10-inch pipe in Main Street, from the Catskill aqueduct to the Route 9D pressure-reducing valve (PRV),” about 6,200 feet, or more than a mile, “should be implemented,” he recommended. “Should funding for the entire project not be available initially,” he proposed that the work be undertaken in phases. The pressure-reducing valve is on Main Street, just below Route 9D (Morris Avenue-Chestnut Street). The system uses a second PRV on Northern Avenue, likewise just below 9D-Morris Avenue. The system needs pressure-reducers because too much pressure can lead to breaks or leaks and jeopardize household service and plumbing, Gainer wrote.
His report says the 10-inch pipe is thick inside with encrustation due to its age but that “capacity could be improved by either cleaning and cement-lining of the existing pipe, or by replacement” — a more costly operation. At the village board meeting in June, he said cleaning and lining the pipe should keep it functioning for 50 years. As part of longer-range upgrading, he similarly recommended the cleaning and lining of the 10-inch pipe in a several-block stretch along Main Street below the pressure-reducing valve, a venture estimated to cost $155,000.

Alternatives Deemed Inadequate
Gainer also analyzed two other proposed immediate improvements, the addition of a new water tank near Cedar Street and Haldane and creation of a separate, “raw water” or river-water system,  to be used to fight fires and kept separate from the clean, drinking water system. Gainer found both had merits but neither could solve the problems. According to his report, adding another large storage tank, behind Haldane, would help minimize the overall improvements needed, since the tank could be used for fire-fighting. “However,” the report cautioned, “large-diameter mains would then be required from Main Street” to the tank, to get the water into the system’s pipes. The tank, too, would cost $930,000, according to the report, and “would provide an overall benefit to the entire water system.” The report also said that when a tank was proposed for land — no longer available — near Haldane in 1992, “opposition by village residents prevented the village from proceeding.” Because the tank would now have to go in a spot highly visible, “public objections will likely only increase,” the report predicted.
Gallagher said a new tank would have to be placed in the scenic James Pond area, behind the school and near the 19th– century Cedar Street cemetery. A local resident who closely followed Haldane and village activity in the early 1990s remembered that though school and village officials considered installing the tank, the Haldane School Board ultimately voted 5-0 against the move, since the tank would have gone on land envisioned for school expansion.  Furthermore, the water tank would have benefitted Cold Spring and Nelsonville residents but not those in the Haldane district who dwell beyond the two villages, said the source, who sought anonymity because of the volatility of the subject.  “In the manner of Cold Spring, they have done nothing in the interim,” the source commented. All that aside, even with a new, 300,000-gallon tank, without the cleaning and lining of the 10-inch pipe   from the school area further down Main Street, “only limited improvements would be delivered,” Gainer wrote. In short, Gallagher said, the tank would not do much for portions of Nelsonville and the western side of Cold Spring.
Gainer said that a third option, a separate “raw” river-water pump station and system, with a price tag of $840,000, would require more fire hydrants and other infrastructure “and without significant additional commitment” of firefighters and equipment would “improve fire protection to only the specific areas where raw-water mains were extended.” Such concerns “make this alternative less attractive than the other options studied,” he determined. Ultimately, he concluded, “cleaning and lining the existing unlined 10-inch pipe in Main Street “¦ offers the greatest benefit to overall fire-flow deliveries throughout the water system.” The alternatives “don’t make all that much sense,” Gallagher concurred.

Long-Term Capital Improvements
Beyond the immediate cleaning and lining work, Gainer also urged longer-term water system upgrades. “Significant other distribution pipeline improvements should be made in order to improve [the] ability to deliver required fire flows to the commercial, institutional, and high-density residential areas of the water system,” he wrote. His suggestions include installation of a new:

According to the report, costs of this work would total $1,783,000, on top of the $930,000 for the basic   10-inch pipe cleaning and lining and the $155,000 for the Main Street-commercial stretch pipe cleaning and lining. Add those in and the overall expense increases to $2,868,000.
Gainer advised the village to adopt a capital improvement plan and proceed “in an orderly and cost-effective fashion over an extended period. Constructing all required water system improvements at one time is not cost effective and would cause water rates that the village must charge “¦ to be excessive.” But he also observed that the Village of Cold Spring “has no legal obligation to provide for fire protection,” though its years of maintenance of hydrants “establishes a responsibility to achieve some level of protection.” If it wished, Gainer wrote, the Cold Spring government could  deem a given amount of village involvement “appropriate” and simply “mandate that any buildings requiring above that level must provide for [fire] protection on their own.” In essence, the village could walk away from any additional obligation.