“This is one of the best things I’ve seen locally in a long, long  time. Maybe the best ever. I can’t wait to come back.”

That was Garrison resident Bill Sadler’s reaction to the new exhibit that opened at the Putnam County Historical Society & Foundry School Museum (PCHS-FSM) in Cold Spring on Saturday, July 31.

“Making a Living:  Businesses in Philipstown and Beyond, 1850 to 1970” is a remarkable visual trip back in time that focuses on industry and commerce in Cold Spring, Nelsonville, Garrison and Manitou – with cameo appearances by Kent and Albany Post Road – Route 9 as we know it today.

The exhibit, which features many fascinating photographs and artifacts is certainly timely given the amount of attention being paid to business as part of two ongoing local planning initiatives – new zoning for the Town of Philipstown and the new Comprehensive Plan for the Village of Cold Spring.

Whether or not local leaders, volunteers and residents will learn anything from what business looked like in the past as they finalize those documents remains to be seen. Visitors, however, to PCHS-FSM may be struck by how many ideas being put forward today – from the need for a more diverse local economy and the provision of more essential services on Main Street to increased accommodations for visitors to the possible renaming of Cold Spring as Cold Spring-on-Hudson – were actually put into practice many years ago – only to disappear over time due to changes in technology, transportation, demographics, shopping habits and the world beyond Philipstown. 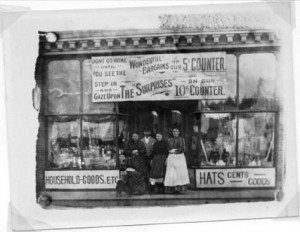 One of the surprises for many attending the opening reception last Saturday was the section devoted to Manitou.  Now little more than a whistle stop for Metro North and a small collection of houses, Manitou was once a thriving industrial center. More than one person was overheard to say “I had no idea that was there . . .” as they studied the photographs of the Highland Chemical Works and Hudson River Copper Mine. In the mid 1800’s the processing plant, which produced some fifty two thousand pounds of sulphuric acid a day and employed 80 people. The copper mine employed an additional 180 workers. By 1886 the mine was in decline and copper had to be imported from Italy. The plant closed for good in 1913.  A photograph of T.D. Denney Groceries and Provisions underlines Manitou’s thriving past. 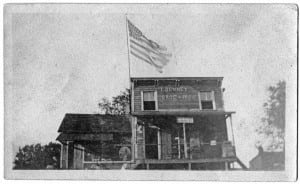 It may hard to imagine today but Nelsonville was once home to two hotels. The Imperial Hotel is captured in a beautiful photograph taken before the three story structure burned to the ground in 1914.  Also highlighted is Champlin’s Blacksmith Shop which still exists across form Pali’s Deli on Main Street. Established by Thomas Coe it was sold to Daniel Dykman in the early 1800’s before Henry Champlin took over the business in 1858. Norman Champlin carried on the family business till 1954. The shop, which remains intact, included three forges.

Garrison’s Landing is also well represented. A 1859 lithograph shows the West Point Ferry docked there and an original ticket stub for the fifteen cent trip across the Hudson River needs little explanation.  An aerial photograph from 1928 shows the ship Highlander which sank right at the Garrison dock. Photographs from the set of the movie Hello Dolly, which was shot at the Landing, are also on display. For many area residents perhaps the most poignant artifact of the entire “Making a Living” exhibit  is the cash register from Guinan’s Country Store and Pub. If that register could talk it would be an impressive audio exhibit in itself. 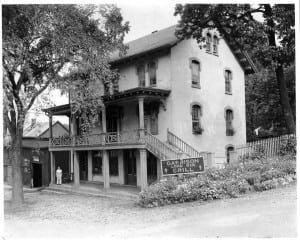 One of the many incarnations of the Garrison Hotel, Garrison Landing. Collection of PCHS.

Not surprisingly, Cold Spring, the area’s business center for more than two centuries, is a major focus of the exhibit.  Visitors are treated to numerous glimpses of a village that is a world apart from today. One of the more intriguing artifacts is a large, old, but undated glass bottle embossed with the words, “Mount Taurus Spring Water – Bottled at the Spring – Cold Spring-on-Hudson, NY.” A broadside advertisement promotes the wares of “Carl Brassch First Class Boots & Shoes, Main Street, One Door West of Stone Street,” which operated from 1860 to 1905. The Pacific House Hotel – today’s Hudson House and the Bella Vista Hotel located just to the north are also depicted. A photograph captures the front of Tony’s Grocery Store on Main Street, owned and operated by Donato Yanitelli until 1933. When prohibition ended Yanitelli received one of the first liquor licenses in Putnam County and opened his wine and liquor store at 123 Main Street – the forerunner to the present day Yanitelli’s Wine Store on Chestnut Street. 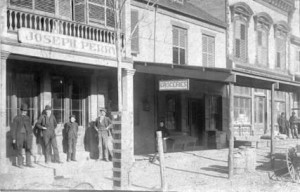 A very dignified looking Ling Tsui who operated a laundromat on Main Street between Garden Street and Fair Street and whose life ended tragically on a trip into New York City is depicted in a haunting black and white photograph. Glick’s Clothing Store is featured as well. An immigrant for Austria-Hungary, Jacob Glick established his dry goods and clothing store in 1906. The store operated until 1975. The intersection of Main Street and Rock Street in 1958 certainly looked very different than it does today. Depicted in a painting by Michael Kelly is the Grand Union grocery store located on the corner flanked by The National Bank of Cold Spring-on-Hudson. One door north is Putnam Upholstery which sits next to the Cold Spring Fire Company – the present day village hall.

PCHSFM curator Trudie Grace said that the exhibit will continue to evolve and that suggestions and additions are welcomed. A wall space has been designated for people’s comments. The exhibit will run through December 19th, 2010. Learn more about PCHS-FSM and “Making a Living” at pchs-fsm.org.  Funding for the exhibit is courtesy of The Hudson Valley Heritage Area, M&T Charitable Fund, Josh Maddocks and Garrison Tree.

One thought on “Back to the Future in Philipstown?”