By Michael Turton and Alison Rooney

Part of Cold Spring and Route 9D south to Bear Mountain suffered a power outage Friday night. The lights went out abruptly just before 8:00 p.m when a large tree fell over power lines on Route 9D just south of Indian Brook Road.
On Main Street, the difference between Cold Spring Pizza and The Silver Spoon Restaurant was like night and day. The pizza shop and buildings west down Main Street did not lose power. Just one door away, patrons at “The Spoon” spilled out onto the sidewalk as the restaurant was plunged into darkness. Houses and businesses east of 122 Main Street and south on Chestnut were affected by the blackout as were properties along and off of 9D as far south as Bear Mountain Bridge. Here and there, a few scattered houses with backup power remained lit. 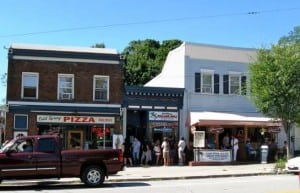 Bright and sunny today, the blackout left pizza eaters in the light and diners at Silver Spoon in the dark.

At the corner of Main and Chestnut Streets drivers cautiously took turns inching their way through the busy intersection. Inside Whistling Willies, The Trapps, an indie Americana roots band were just about to launch into three hours of electrically-supported, original music. Electric lights gave way to candle power. The band quickly improvised, moved closer to the audience and responded with a sterling acoustic set. The atmosphere was both intimate and festive. When the lights finally came back on several people were heard to shout, “No, turn them off!” Lead singer Sean Schenker remarked, “This is turning into one of our best gigs. This is fabulous!.”
Things weren’t as fabulous just down the road at Boscobel, where, for the first time in twenty five years, the Hudson Valley Shakespeare Festival was forced to cancel its performance of Bomb-itty of Errors.  In a telling moment of our era, as opposed to most of what HVSF presents, this piece requires more than just the poetry of language — it depends on technology, i.e. a the spinning of the discs which set the Bard to rap.  No electricity, no discs, no Bomb-itty.
However, the Depot Theatre, in Garrison was the scene of some real ingenuity, as some of the non-Bomb-itty Shakespeare Festival cast members performing their “In Process” series decided to go with the spirit of improvisation of their Sports Games evening, and the proceedings were moved across the road to Garrison’s Landing, where actors and audience set up chairs, theater staff lent their car lights, and a couple of well-placed flashlights turned the evening into an alfresco affair, and one of those special nights in which the alchemy of the unexpected makes things even more perfect than what was originally planned.
Crews from Central Hudson were able to restore power shortly after 10:00 p.m.

One thought on “Cold Spring, 9D Corridor Left in the Dark”