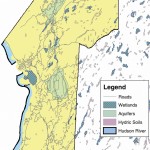 Those seeking to build a house in a busy commercial industry district get a break in Philipstown’s mid-summer rezoning draft — the fifth since 2008. Instead of demanding a special permit and review for construction, the new draft allows construction of a moderate-sized house by right (with a standard building permit) in districts zoned highway-commercial and office-commercial-industry-mixed use. But Town officials expect few takers.
“I don’t think there are going to be a lot” of interested parties, Town Supervisor said when the Philipstown Town Board discussed the move last month.
“It’s very rare that you see” someone building a private home in a commercial corridor, Joel Russell, Philipstown’s rezoning consultant, agreed.
The change appeared in the July rezoning document, which evolved from a 2½- hour editorial session-cum-public forum in which the Town Board and Russell went over the June draft page-by-page to tweak the content. Several changes resulted, some relatively minor.

Along with the highway-commercial and the office-commercial-industry-mixed use districts, the rezoning sets up seven other districts for a total of nine:

1. Rural Conservation (RC), “to promote land conservation, agriculture, forestry, recreation, and the preservation of open space, as well as other compatible rural uses, by encouraging such activities and by discouraging large-scale residential development, while allowing low-density residential uses.”
2. Institutional Conservation (IC), “to preserve existing institutional uses of property of 20 acres or more that maintain significant amounts of contiguous open space and/or historic structures.”
3. Rural Residential (RR), for “residential uses in a rural setting at a lower density than is allowed in the hamlets.”
4. Hamlet Residential (HR), with “the traditional scale, density, and character of residential hamlets such as Continental Village, as well as residential neighborhoods surrounding designated hamlet-mixed use areas.”
5. Hamlet-Mixed Use (HM), for “creation and expansion of hamlets in the traditional scale, density, architectural style, and mixed-use character of the existing hamlets of Garrison and Garrison Landing and of the Villages of Cold Spring and Nelsonville.”
6. Suburban Residential (SR), “to maintain the character of existing suburban density residential developments and to allow a limited extension of suburban growth patterns.”
7. Highway Commercial (HC), for “commercial uses that rely heavily on automobile and truck access and that would not be compatible with a hamlet mixed-use area.”
8. Office-Commercial-Industry-Mixed Use (OC), “for light industrial, service commercial, office, and research facilities,” along with, “where compatible, housing and limited retail commercial development intended to support the primary uses or to provide adaptive re-uses for existing commercial or industrial buildings.”
9. Industrial-Manufacturing (M), for “industrial and related uses that are not compatible with most commercial, office, or residential uses, in isolated and well-buffered locations.”

Overlay districts
Likewise, to “provide additional protection of important environmental resources” as well as “permit certain types of economically productive uses that would not otherwise be allowed,” the draft rezoning superimposes seven “overlay districts,” some geared toward use of land and some toward safeguarding natural features, such as the Clove Creek Aquifer, a crucial water source for Philipstown and Fishkill potentially threatened by plans in Fishkill to build a 210-unit trailer park above it.

The seven overlays are:

Contrasting with raucous public meetings in September 2009 and April 2010, the Town Board’s July session drew only 10 to 12 dozen audience members. However, since the initial furor erupted, the board has made repeated revisions and engaged in one-to-one conversations with concerned residents. “It’s a very different document than it started out as,” Shea noted July 13. “I don’t see anything drastic at this point,” in terms of further changes. “We’ve heard from just about every person in Philipstown.”
One change made that evening involved construction in the Scenic Protection Overlay district. In addition to requiring site-plan approval for land disturbances of more than 10,000 square feet, the board added a provision stating that “site plan approval shall be also required for the construction of any dwelling exceeding 3,000 square feet in floor area.”

Flexibility for Businesses
Businesses received some additional leeway. For example, when what’s acceptable under zoning changes, the board provided flexibility for entrepreneurs taking over a business property. The new draft allows not just continuation of the existing business but establishment of new one functioning the same way. Thus, with the new language italicized here, the latest draft says that “any business owner or tenant may continue to operate an existing business, or any business in the same use category as the existing business, in a zone where it is not permitted by this [rezoning], and may sell or transfer it to another owner or tenant who shall be permitted to operate the same business in the future.”
To a prohibition on long-term portable signs mounted on wheels, the board added one word — unregistered — and ensured the legality of trucks painted with business names. The new draft bans devices “mounted on wheels, including unregistered motor vehicles or trailers parked in one location for more than 30 days in any calendar year and functioning primarily as signs.”
The board also eased some business parking and landscaping mandates. As a general rule, the rezoning draft restricts parking to the sides or rears of buildings. But in the office-commercial, highway-commercial and industrial-manufacturing districts it allows the town Planning Board to waive the rule “where parking visible from the road is a commercial necessity.” Similarly, while demanding tree-planting to screen front parking within the highway-commercial and office-commercial districts, the new draft adds that this “requirement may be modified or waived where parking visible from the road is a commercial necessity for the business.”
Town reviewing boards also got more maneuvering room when overseeing compliance with environmental performance standards, which cover discharges of smoke, radiation, air pollution, and untreated water.  The rezoning already exempted “farm operations engaged in customary agricultural practices, except where necessary to protect public health and safety.” But the Town Board added a new sentence allowing review boards to modify the requirements when “necessary for the commercial viability of the use” and doing so “will not adversely affect neighboring land uses, or where there is a specific federal or state standard with which the use is in compliance.”
The board likewise expanded the permission for contractors to park, maintain and store heavy equipment — weighing two tons or more — when it normally would be forbidden. The previous draft exempted contractors in the manufacturing-industrial, and highway- and office-commercial districts, except where the site abutted a property in another zoning district. The July draft removes that exception.

Home-based business concerns
However, the board added a couple of stipulations governing home-based business occupations. First,  it provided that “a maximum of one business vehicle of up to 24,000 pounds gross vehicle weight may be parked regularly in a location visible from a public road or neighboring properties.” Before, the rezoning plan had not limited the number of vehicles.
Second, the board added a line stating that at a home-based business, “no hazardous materials, such as oil, propane, gasoline and other toxic chemicals, shall be used or stored on the property in quantities that may pose a threat to public health or safety.” “I think it’s important that it is a privilege” as opposed to a right, said Councilman John Van Tassel, who advocated the change at the July editing session.
Finally, the new draft redefines “warehouse” to encompass “warehouse/wholesale business” enterprises and refers to “a structure or structures or business operation in which materials, goods, or equipment are stored and/or held and transported for distribution, including mini-storage and self-storage facilities, excluding retail sales.”
Occurring throughout the new draft, a another change substitutes “40,000 square feet” for the prior wording of “one acre,” to dovetail with current R-40 zoning, involving lots of 40,000 square feet. An acre fills 43,560 square feet; the revision enables a parcel falling just short of one acre to avoid problems.

Next Steps
Over late spring and summer, the board also studied the maps accompanying the rezoning draft, with an eye toward possible improvements. In one case, it removed from scenic ridgeline coverage a ridge on Saunders Farm in Garrison. When the board convened for its regular monthly meeting Aug. 5, the alteration prompted a question from a neighbor who described himself as “suspicious” and “shocked.” Shea replied that the planned rezoning already deeply affects Saunders Farm and that the board sought to lift some of the burden. “We did it. I don’t regret doing it,” he said, observing as well that the planned rezoning continues to safeguard scenery. “If you go through and count the number of ridgelines protected on these maps, it’s probably 100.”
As the summer winds down, the Town Board awaits a new “build-out” analysis, gauging the effect of the rezoning, and preparation of an environmental assessment form, both being undertaken by consultants. “Those things will get done, hopefully, in the next couple months,” Shea said in mid-July. “We’ll have a public meeting when the EAF is finished.” Ultimately, “this will all lead to a public hearing,” — the formal opportunity for the public to voice opinions.