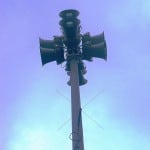 The Cold Spring Village Board voted 4-1 Wednesday night (Aug. 25) to use a ½-second test twice a day for the fire siren, with a 40-second blast to sound in cases of actual emergency.

Action followed more than an hour of debate by residents who packed the village hall meeting room and spilled into the corridor. It also came after a vote by the Cold Spring Fire Company on Aug. 17 favoring retention of a 4-second test and after siren supporters presented a petition, with more than 70 signatures, asking the board “to please restore the noon and 6 o’clock emergency whistle tests to a duration of four seconds. Basically, we want it to blow like it always has!”

Mayor Seth Gallagher and Trustees Charles Hustis, Bruce Campbell, and J. Ralph Falloon, a former Cold Spring Fire Company chief, voted for the ½-second test and 40-second alarm. Trustee Airinhos Serradas voted against the measure, calling on interested parties to “have some dialogue back and forth,” although the issue has been considered at board meetings three times or more since last autumn.

“I want to be done with this,” Falloon said, before the board vote. “Obviously this is a bit of a nightmare for everybody here. Everybody is not going to be happy, no matter what we do. It’s costing us time and money” to keep revisiting the question and testing or re-setting the siren.

The debate between village factions — neighbors of the siren and fire company members and other siren proponents — raised issues of necessity versus tradition and whether the fire company or the Village Board determines siren policy. Under at least some circumstances, noise above 85 decibels threatens human hearing. At the request of the siren neighbors and Village Board, a technician checked its decibel level last week. The check showed a volume of 118 decibels in a 40 second-blast and 118.6 decibels in a 4 second-blast. But with at ½-second, the siren decibel level dropped to 102. (The ½-second length does not include the siren wind-up and wind-down periods.) Pending the vote of the entire fire company, fire department officials opted to keep the daily tests at a ½-second.

“We are not advocating elimination of the siren. I’d like it to ring as long and as loud as possible when there’s an emergency,” Fields said.  Likewise, “we want to be on the record that we support and value our volunteer fire company.” His group presented several pages of detailed data on siren usage and options, drawn from other area communities with sirens and consultation with technicians and others with expertise.

But fire company representatives rejected the information as immaterial. “To me that’s a totally useless piece of paper,” Fire Company Vice President John Landolfi responded. “It’s wonderful, all the work they did, but you can’t compare apples to oranges,” given dissimilarities between the Cold Spring Fire Company and other departments. “I don’t understand why we’re doing this. We’re exempt from all the laws pertaining to that” prohibition on excessive noise he explained.

“I don’t understand why that would be up to” the village government to determine since “the siren is on the lease” between the fire company and village, Landolfi objected. “You’re wrong” in seeing it as the Village Board’s prerogative” he told the mayor. “We’re the ones obligated to have it,” Gallagher replied. “We’re the ones who pay for it.”

An unidentified woman in the audience wondered “why it is that the fire company is against accommodating the rest of the town if it doesn’t impede safety.” The siren “is the back up to the pager system they have,” Gallagher said.

“The fire siren is what we want, probably more so based on tradition,” Fire Company President Michael Bowman said. “But we’re here to serve this community.” He noted that the siren used to blast for 12 seconds in tests. “We cut it by two-thirds down to four seconds, and we think that’s an acceptable compromise. There’s a huge community sentiment to have this preserved.” Fields and his colleagues suggested the village find an alternative way of heralding the arrival of noon and 6 p.m., instead of having the siren test act as a time-whistle or alarm clock as it has for decades.

“We’re confused between testing a siren for emergency purposes and the fulfillment of the tradition for the village,” Fields suggested. “We’re talking about using it for a test when it’s really about marking hours. I don’t want to get these two things con-joined because they’re really not.”

“I think it’s a traditional test,” said the mayor.