Garrison homeowners Michelle Clifton and Sue Downes know that there must be many other people out there just like them — in one respect, at least.  They are owners of homes designed by modernist architect and former Garrison resident Frank Dushin, and they both feel a reverence for, and strong personal connection with their dwellings. Clifton has lived in hers for 25 years, and Downes, 14.

Having chanced upon each other, they excitedly shared what they knew about Dushin and his designs, and have now joined together to seek out other current and former owners of the many homes which were built in this area and nearby, beginning in the early 1960’s.  Downes’ home was built in 1961, Clifton’s in 1971. 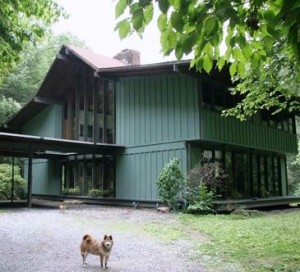 In the mid-1950s he opened a private practice in Peekskill. Known as a Frank Lloyd Wright contemporary with a vision of bringing the outdoors in, he designed many (the exact figure is not known, but is thought to be over 60) custom-built homes in the Hudson Valley and metropolitan New York area.  Eight or nine of them are located on Garrison’s South Mountain Pass alone.

Together Clifton and Downes have formed “The Frank Dushin Society,” a collective of modernist homeowners and enthusiasts honoring Dushin’s memory.  According to Society material, the group was organized to “celebrate [Dushin’s] artistic contribution to the Hudson Valley and connect with previous and current homeowners.” Many of his Dushin’s earlier homes still remain.

Downes has written “They are respectfully maintained in their original splendor with his signature structural materials of large expanses of glass combined with the rich visual quality and strength of Douglas fir timber. His iconic architectural designs exude a warmth and spirituality; a stark contrast to the cool minimalism that characterizes many modernist homes today.”

Garrison designer Joe Chapman worked with Dushin on several homes.  Chapman says “I always designed my own houses, and he did the architectural/engineering plans.  I loved working with him.  He was a wonderful draftsman, a beautiful craftsman, and he knew a great deal.  He was very influenced by Frank Lloyd Wright. I never had any problems with any of his houses—they all stood up beautifully.”

Downes believes that her home was Dushin’s first commission (he had previously built his own home).  It differs from many of the later homes he designed, in its openness and its lack of a flat roof, but features the Dushin signature of extensive, perfectly placed windows.  Having looked at the very detailed original plans for the home, Downes feels that Dushin may have persuaded the original owners to move from a more traditional to contemporary style during the planning process.

Clifton says that the original owner of her home had one request from Dushin: “I would like a house with a tower.”  And that request was more than fulfilled. Twenty-five years after moving in, Clifton is still enthralled with her home, “I think that this is my favorite house that I’ve ever seen—and I get to live in it.” Both Clifton and Downes acknowledge a spiritual connection with their homes, Clifton noting that “the home is a part of our lives, rather than just a roof over our heads.” 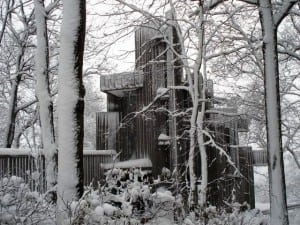 “Tower” Covered with Snow. (Courtesy of Chuck and Michelle Clifton)

Clifton and Downes find it frustrating that Dushin’s output is so undocumented.  It has been very difficult for them to find the level of scholarship and archival materials normally associated with such a successful modern architect.  There is a quirky aspect to elements of the homes which can make repairs and restorations difficult.

They are hoping that The Frank Dushin Society will become comprehensive enough to enable its members to share helpful information which will assist in maintaining these homes.  Eventually they hope to create a database and Web site with homeowner resources.

As a start, The Frank Dushin Society is trying to get the word out.  They are aware of 10 to 15 of the homes and homeowners, and are hoping to connect with the other 35 or 40 out there.  Anyone interested, or with information to share, should email Michelle Clifton at [email protected].

2 thoughts on “Do You Own a Home Designed by Frank Dushin?”