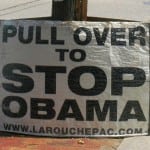 Representatives of the Lyndon LaRouche organization generated both support — including money — and strong criticism when they brought their “Impeach Obama” campaign to Cold Spring’s Foodtown plaza on Wednesday. (Sept. 1).
The critics included a local man allegedly arrested for dumping their table. With signs depicting President Obama with a moustache like Adolf Hitler and calling for the preservation of NASA, the two veteran LaRouche backers set up shop on the brick verge alongside Chestnut Street, claiming a bit of shade on a sweltering day.
LaRouche, 87, a frequent candidate for president, was convicted in December 1988 of defrauding both the Internal Revenue Service and supporters who had loaned him millions of dollars.  He served five years of a 15-year prison sentence and now expounds his views through a political action committee (PAC) and website. “President Barack Obama’s stated intention, to shut down and destroy the NASA program at its root, when added to the Hitler-like health-care policy, and the general, destructive features of all other leading Obama policies, is one step too far to bear,” LaRouche declares on the website. “There is no longer room on this planet for a United States and a President Obama to occupy the same space.”
Chris Sare, who said he had been with LaRouche for 21 years and is paid by the news service that disseminates LaRouche’s Executive Intelligence Review publication, suggested that a goal of the Obama healthcare initiative is to exterminate people as Hitler did. Sare also derided Obama’s efforts to control Wall Street excesses as woefully insufficient. “He’s bailing out the speculators.” 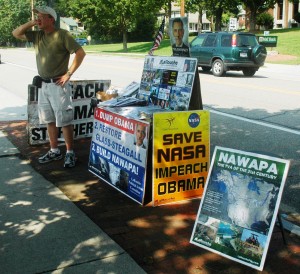 “We want to get him out before he destroys the country,” said Sare’s colleague, Margaret Scialdone, who described herself as a LaRouche volunteer for 26 years. “Anyone want to impeach Obama?” Sare called out to drivers and passersby. “It’s fun!” Scialdone asserted.
“I’m a liberty fan,” Craig Knapp, sporting a badge as a CBS staff member, said, offering a donation. “I’m a die-hard Republican.”
An elderly woman neared. “What do I do?” she asked, explaining that she “can’t do anything” financially, because she is already sending money to assorted groups. She signed her name to a roster of supporters and then asked, “If they get that, can they retaliate?” — an apparent reference to the federal government. “The retaliation comes if Obama stays in,” Scialdone answered. The woman subsequently contributed several dollars. She told Philipstown.info she did not like Obama “because of all the things he’s done so far.” She said she had learned that he wanted to give offshore Alaskan islands “to the Russians” in a deal that also somehow involved Sarah Palin, former Alaskan governor-turned-Republican TV celebrity.
Piles of literature covered the LaRouche table and a younger woman accepted several samples. “I’d like to take this home and see what we can do,” in terms of a donation, she said. Instead, Sare wondered if she would be willing to give them $5 or $10 immediately. He told Philipstown.info he hoped to raise $1,000 during the day-long appearance in Cold Spring, but declined to give the amount collected by about 2 p.m. When a reporter sought to take a booklet, he said it was for sale, not free. He hastily added that “we can give it to whomever we want.” The news media, perhaps, did not qualify.
One of the free hand-outs called Obama a “psychotic” who “is ripe to be removed from office and replaced by a combination which would bring LaRouche’s ideas into fruition, the only ones to save the planet. But should British puppet Obama remain in place, the future is a horrifying replica of the 14th-century, or worse.” Actually, the 14th century in Britain saw the rise of Parliament, a belief in its right to limit the power of monarchs, and the glimmers of a proto-democracy.
But back in 21st century America, anti-Obama sentiments brought more potential LaRouche allies to the table. “I can’t stand Obama,” a young man announced. An older man expressed similar opinions. “That’s why I walked all the way over here,” he said, noting that he was short of cash. “I can go to the bank,” he said, crossing the street to the M&T Bank lawn. A few minutes later he came back, with a smile and a donation: “Yeh, $25.”
But not all who ventured close agreed. “It’s insensitive. It’s disrespectful,” Giom Grech, a local resident, said of the picture of the president as a Hitler clone. He suggested that those who want to discuss national issues should “be rational. Don’t show a guy with a Nazi moustache. But people have a right to express themselves,” he added.
“I feel it’s wrong,” to liken Obama to Hitler, said Dr. Peter Bach, of the veterinary clinic across Benedict Road from the Foodtown plaza. “I feel offended by that. I’m proud we have a black president.”
Russell Cusick, an artist and photographer, also noted the Obama-as-Hitler poster. “Is that Charlie Chaplin?” he asked. Lingering, he exchanged barbs with the LaRouche backers and captured the moment on camera. “It’s all freedom of speech and it’s a beautiful thing,” he pronounced. In addition, “it’s kind of boring around here and you guys are wonderful entertainment value.” Nonetheless, Scialdone objected to Cusick’s camera action and persistent questions and called the police. Cusick departed, saying he was going to lunch, giving the location, should the police seek him. And “I’ll be back,” he promised.
Cold Spring Police Officer Edward Boulanger pulled up in a police car a few minutes later. LaRouche critics “have a right to be here also,” he advised Scialdone. “At this point, I don’t see a harassment charge.” Earlier that day, Scialdone said, a man who fiercely disagreed with their opinions “flipped over our table,” resulting in his arrest. Boulanger referred questions on the incident to Commanding Officer George Kane, who was not available for comment on Wednesday.
Cold Spring resident Phil Heffernan said he drove by the LaRouche stand in the morning but did not stop, despite being intrigued. “I was very surprised to see that political thing going on,” he said Wednesday evening.