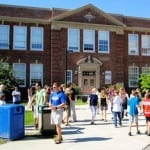 Rites of passage are relative things.  There are those which loom large for most people: going off to college for the first time, wedding day, birth of a baby, first day of kindergarten.  Then there are the ones which aren’t recalled as easily—those transitions which seemed somewhat terrifying at the time, but soon become part of life’s ebb and flow and wind up as “oh that was nothing.”  Things like moving up from elementary to middle school.
Being a K-12 school, Haldane sees many transitions: into kindergarten, followed soon after by the demands of first grade, the changing from one teacher all day to multiple, subject-area teachers (which begins in fifth grade), then on to middle school in sixth, high school in ninth, and, finally, that big one again: high school graduation and a world beyond.  There may be multiple transitions, but the nature of being a one-campus school means that, aside from the first and last, these changes are less intimidating than in other locales, where every few years children attend new facilities, often with a different group of students. As Catherine Platt, mother of 6th grader Andrew noted, “He’s excited by the change and is looking forward to it. It’s 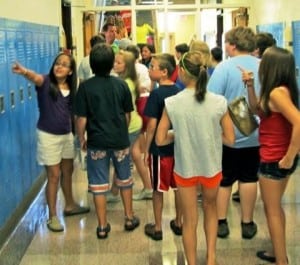 a benefit of a small school that he already feels this comfortable.”
Knowing all about how difficult some of these steps can be, Haldane has developed orientation programs to ease the way.  This week a “big” transition was acknowledged, with the arrival of the kindergartners for orientation day, and a “little” transition was marked, as the 6th graders came for their middle school orientation day.

The sixth graders had their day first, on Monday, August 30.  Strolling in, full of “I’m a middle schooler now” attitude, they didn’t look overawed by their new surroundings.  That may be because they have spent the better part of all of their previous years at Haldane being just down the hall, in the elementary wing.  But that didn’t mean there weren’t some butterflies.  Middle school involves increased moves between classrooms, getting used to schedules, “A” and “B” days, and, the biggie: having one’s own locker, and with it, the much feared “locker combination.” 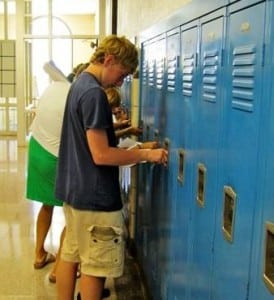 As the students filed into their homerooms, their homeroom teachers, each a core subject area 6th grade teacher, put them at ease right away.  Lara Pendergast, who teaches math, addressed her class with calming words. “By the first day, you will feel more comfortable.  We are sensitive to the fact that this is a really big change for you.  We are caring and we are here to help you with any transition.  Grab one of us and wisk us off to the difficulty you are having and we will help you.”
In his classroom, social studies teacher Jeff Sniffen told his group “this talk will answer the questions ‘where do I need to go and how do I get there?’ — I’m going to walk you through the ways of the school.”  Middle School guidance counselor Carol Storey visited and explained about the day being divided into periods. “You’ve been on a schedule your whole lives, but you may not have realized it.”
Things important to sixth grade at Haldane such as intra-murals, what happens with homework given on an “A” day class – is it due on “B” day or the next “A” day?, what goes on during 10th period, what the sign outside the Middle School office is for, what constitutes a flip-flop (can’t wear them in Middle School), etc.  Along the way, kids were introduced to some of Haldane’s new staff members, including librarian Juli Burok, social worker Scott Many, and athletic director/dean of students Tom Cunningham. 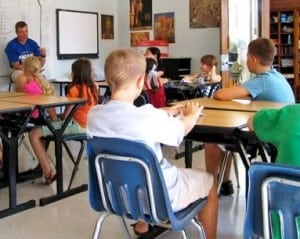 Finally, it was locker time.  Each student was given his or her locker number and combination, with instructions as to those magic turns of the knob. All filed out into the hallway and did battle with the storage bins.  Some were immediately successful, while others tried valiantly. Most eventually succeeded.  Sixth-grader Corina Schmidt was satisfied: “I tried 7 times and then I FINALLY got it!  Plus now I understand A days and B days.” Relief was felt by all.
The orientation concluded with a picnic, and most of the students seemed to feel that giving up a few precious remaining hours of summer to come to school was very worthwhile — the locker deciphering being mentioned by all of them as the most helpful aspect.  Being a brand new middle schooler seemed to suit Becky Gore very well. “I’m just really excited. Apparently they’re really awesome teachers and very nice!” 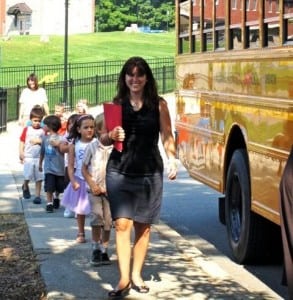 Two things were visibly different at Tuesday’s (August 31) kindergarten orientation: the first being parents most of whom, (except for those helping out, or chauffeuring) were banished by 6th grade, and the second being just how many of the youngest students there were!  This is the largest entering kindergarten class in many years, with four class sections rather than the usual three.  Orientation itself was divided into two sections, which were then joined together for an ice cream social.
Elementary/Middle School Principal Maggie Davis started things off by introducing some of the school bus drivers, and representatives from the school board (VP Joe Curto), the Haldane School Foundation (Diane Hughes and Eugenie Milroy), and the PTA (President Maria Leiter).  The board, Foundation and PTA hosted a table with a supply of anonymously donated tee-shirts each destined for a member of the ‘Class of 2023.’ Yes, the future is here! 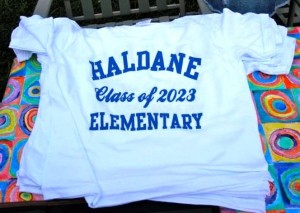 Children, most of whom looked pretty happy to be there, a little trepidation notwithstanding, and their parents then entered the hallowed halls, meeting up with their teacher and heading for their classrooms.  Awaiting them was an individualized place setting consisting of a name badge, various activities, and a scavenger hunt, during which child and parent explored the realm of the kindergartner together.  The parents then quietly left (again, no tears were visible—adults included), and the children lined up and were led across the playground to the big yellow buses, for their first ride. 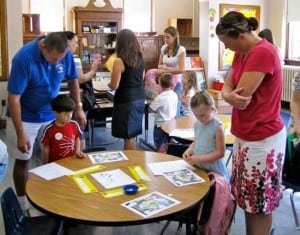 Parents at the ready - for today anyway

According to new kindergarten parents Shannon and Jeff Keegan, the journey for their son, Charlie, has been seamless.  “The transition has been wonderful.  There have been activities going on since spring.  He’s ready.”
Parents for whom this was not a new experience were not immune to the pangs. One mom, with two sons well underway in school, spoke of her daughter, “you know what to expect, but each child is different.  She was the most eager, but it’s hard to know—is it the birth order, or that she’s a girl?”  Tricia Junjulas, whose third of four was entering this year proclaimed it easier, “but he’s still my baby boy.”
Still, as they slurped their rapidly melting fruit pops (donated by Main Street’s Go-Go-Pops), the 80-plus five or almost five-year-olds and even a few terribly mature six-year-olds looked right at home at school. [slide]