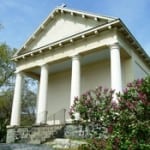 The literary calling is a constant of the Hudson Valley. For centuries, scribes from our region – from Washington Irving to T. C. Boyle – have maintained a tradition of putting pen to paper. And where many writers work, a pool of readers partaking of what they produce typically forms.  Friends Ivy Meeropol, a documentary filmmaker and Rebekah Tighe, a baker for Garrison’s Fresh Company, got to talking several years ago and discovered they shared an enthusiasm for attending readings by authors.  Meeropol was then a recent transplant from New York City, and Tighe, who grew up locally, had spent 12 years in New York City before returning to Cold Spring. Both had young children.  After attending one of the Chapel of Our Lady Restoration’s Sunday concerts – a gospel choir, on a beautiful day – it struck them that the Chapel would be an ideal venue for readings.  With its unusual combination of vibrant acoustics in an aura of serenity, the Greek Revival-style Chapel inspires relaxed, yet attentive listening. Audiences seated in the boxed-off wooden pews are drawn in to whatever is at hand, be it chamber music or a solo performance of words, read aloud. 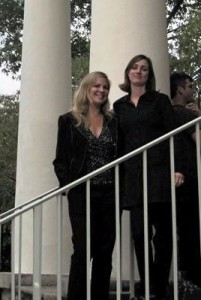 Meeropol and Tighe approached Chapel artistic director Barbara DeSilva with the idea for a reading series and found her very receptive.  According to Meeropol, “Barbara saw the promise right away and was very helpful.”  They began with just one reading in their first season, or, as Meeropol puts it, “we used Jeffrey McDaniel as a trial run.”  McDaniel, a noted poet and Sarah Lawrence creative writing professor, was also a recent Cold Spring arrival, and handily had a new book of poems to read from.  Most important, he was, in Meeropol’s description, an “engaging, dynamic performer; people flock to his readings.” The first audience was not large, but was excited over the prospect of additional readings.  And so, with a poster, a logo designed by Cold Spring’s Christine Caballero, and lots of groundwork, the series was born.

The second year saw four eminent authors appear, including memoirist Nick Flynn, novelist Valerie Martin, poet Edwin Torres, and, once again, Jeffrey McDaniel.  And the audience kept growing. The setting is hard to beat, the programs are free (donations gratefully accepted), and the vibe is literary, collegial and unpretentious.

With the support of a grant from the New York State Council on the Arts Decentralization Program, administered by the Putnam Arts Council, the Sunset Series has been able to provide a stipend for each author, as well as cover printing costs for the postcards and for the posters which are hand-delivered to storefronts, colleges and libraries from Peekskill to Newburgh to Beacon and beyond.  The Butterfield Library sponsors the Series for the Arts Council grant, and goes beyond that, often displaying the works of an upcoming author, and sometimes choosing a book by that author for its home-grown book club. 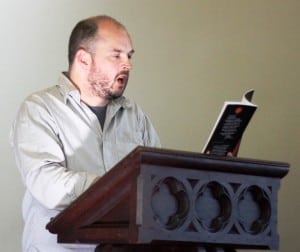 Meeropol cites a special advantage of producing this series in Cold Spring: “making an impact in a small place,” noting that these events would be lost in the swirl of more anonymous readings in New York City and other large markets.  The authors themselves have come to appreciate the rare environment, both physical and intangible, of the Cold Spring readings, replete with wine and cheese and plenty of conversation afterwards.  As author Aimee Bender, who packed the house reading from her comically rueful The Particular Sadness of Lemon Cake, describes it: “What pure pleasure to read at this beautiful chapel overlooking the Hudson (the reader gets the view!) with such a gracious, warm audience, and to talk after by the water with wine and cheese and trees and birds.  An elegant, utterly enjoyable event.”  This echoes thoughts expressed by other writers who, according to Meeropol, have named the readings one of the “top experiences of their careers – not just the setting – it’s the audiences.”  The success of the readings means that authors are now coming to Tighe and Meeropol, asking to read, rather than the other way around.

This season’s authors have included Bender, poet Thomas Lux, actress/writer Amber Tamblyn, and, once again, the Series “lucky charm,” Jeffrey McDaniel.  All have been chosen, in part, for their ability to engage an audience, as well as for the quality of their prose. Short readings by college students precede the main event. This weekend the Series taps into the wealth of literary talent ’round these parts, and presents four local writers: David Hollander, Max Watman, Erika Wood, and Jeffrey Yang.  (See the end of this article for a description of each, provided by the Sunset Series website.) 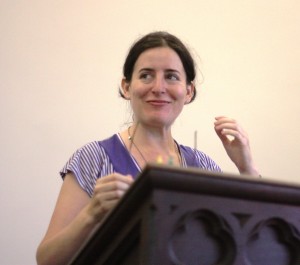 Cold Spring’s Erika Wood is delighted to be a part of the proceedings. “I’m so grateful that Ivy and Rebekah have made such a rich contribution to our community in their Sunset Reading Series at the Chapel Restoration. So far they’ve brought us impressive and talented authors, and it’s just so generous of them to include some of us writers from right here in Philipstown. I do feel we have a surfeit of talent in our amazing little corner of the world (I count Ivy and Rebekah), and so of course I feel humbled and honored to be asked to participate. These sorts of programs feel breezy and effortless when you attend, but they are really a result of a whole lot of hard work on the part of the organizers, and, I believe, a truly important contribution to making Philipstown such a lively cultural destination.”

The Chapel Restoration Board continues to be highly supportive, and is happy that the series is bringing in a new audience to the Chapel.  In fact the Chapel Board would like to see additional programming, especially more for children.  The Sunset Series has obliged with one event thus far, a benefit concert by Uncle Rock, which sold out and raised approximately $500 for the Chapel.  More children’s programs are planned, and the Series hopes to raise further funds for its host at a future reading. 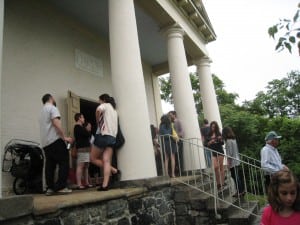 Planning for the next season has begun. Meeropol says “We start to think of who we want to invite. Could be a friend of a friend, or someone with a new book coming out.  Our goal is to finalize all of the readers over the next couple of months.  Then we can get the full series into yearly calendars.”  They then discuss dates with the Chapel. Sundays were arrived at in part because the Chapel hosts so many weddings on Saturdays.  About a month before each reading, the poster is designed, and word starts to spread.  It is hoped that the Series will draw more and more out-of-towners, who will enjoy the wine and cheese which follows each reading, and then linger on in Cold Spring for some post-reading shopping on Main Street, followed by dinner in town. Such a pleasant undertaking is not limited to visitors.  Come along this Sunday, September 19, at 4pm.  The Chapel is located at 45 Market Street, across from the Metro-North parking lot, where free parking is available on weekends.  If you can’t make it this time, the next reading takes place on Sunday, October 17, and features novelist Scott Spencer (“Endless Love”) and essayist (“The Boys of My Youth”) and novelist Jo Ann Beard. More information can be found at www.sunsetreadings.org and also at www.chapelofourlady.com/

Biographies of this Sunday’ authors:

David Hollander is the author of the novel L.I.E., a finalist for the New York Public Library’s “Young Lions” Award. His short fiction and nonfiction have appeared in McSweeney’s, Post Road, The New York Times Magazine, Poets & Writers, The Brooklyn Rail, Swink, Unsaid, The Black Warrior Review, and many other venues less impressive-sounding but equally well-intentioned. His work has been adapted for film and frequently anthologized, most recently in Best American Fantasy 2 and the forthcoming The Official Catalog of the Library of Potential Literature. Hollander teaches in the graduate fiction writing program at Sarah Lawrence College, where he is revered as a god.

Max Watman is the author of Race Day, which was an editors’ choice in the New York Times Book Review.  He was the horse racing correspondent for the New York Sun and has written for various publications on books, music, food, and drink. In 2008, the National Endowment for the Arts awarded Max a literary fellowship. His latest book Chasing the White Dog about moonshine was praised by many, including Publishers Weekly and NASCAR legend Junior Johnson. He lives in Cold Spring.

Erika Wood is the author of the novel The Colorman (Tatra Press) released in 2009. She lives in Cold Spring where she is also an artist, a website designer and the first lady.

Jeffrey Yang is a poet, translator, and an editor at New Directions Publishing. He is the author of the poetry books An Aquarium (winner of the PEN/Joyce Osterweil Poetry Award) and the forthcoming Vanishing-Line, both with Graywolf Press. He has translated Su Shi’s East Slope (Ugly Duckling Presse) and a collection of classical Chinese poems called Rhythm 226 (Tioronda Books). An anthology of nature poems from New Directions he edited–Birds, Beasts, and Seas--will be published in spring. 2011; and the new issue of the world literature anthology Two Lines: Some Kind of Beautiful Signal is edited by Natasha Wimmer (fiction) and Yang (poetry).

One thought on “A Favorite for Writers and Audiences Alike”