The Farm Project is on view at Saunders Farm through October

The Farm Project, an outdoor art exhibition, is now on view at Saunders Farm through the end of Oct. As in past years cows and horses roam freely amongst the artworks and the visitors. Now in its fifth year, the exhibit encourages artists to create works for the farm site, taking into consideration the animals, the uneven terrain, prickly vegetation in some areas, a steep incline, and of course cow manure. (Wear appropriate sturdy shoes for visiting the farm and look down except when viewing the art).

The sheer physical scale necessary to create an impact outdoors is not easy in this vast landscape, even for those artists with a history of working on the land. The length these artists go to in order to participate is not to be underestimated, but the work is uneven. The printed guide states that the works are site-specific, but that designation holds true for only some. 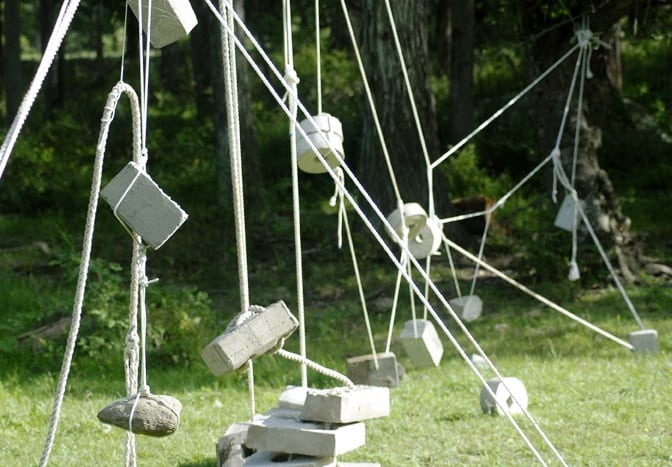 Upon entering, one of the first works on view is a classic metal sphere by veteran sculptor Grace Knowlton, who lends instant credibility with her presence. Not site-specific but site-sensitive, it is difficult to find as it’s a bit hidden by tall grasses. Ruth Hardinger, another recognized NYC artist, has a sprawling rope and concrete installation nearby held together by two trees, nearly 50ft wide. Titled Continuous Draw #4, the work acts as a visual boundary between two pastures and has a playful and performative, balancing act quality. This work lives up to the intention of site-specificity by making good use of its location and responding to the landscape’s features successfully. 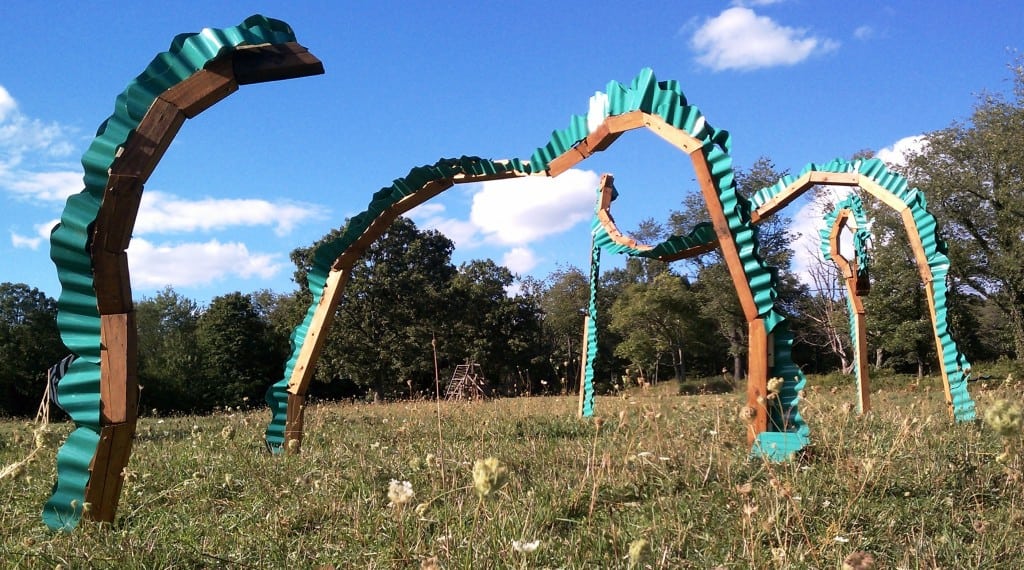 ” In a Sea of Grass” by Elizabeth Barksdale. (Photo by Peter Schlemowitz)

A common theme in this exhibition are works that produced sound. Some intentionally invite the viewer to participate; others provide sound with the help of gravity, wind or perhaps a cow brushing by. Thomas Ryan Barkman’s minimal and elegant piece Harmonic Frequency, consists of a series of resonant metal tubes harmonically tuned to a whole tone scale. Kids (and their parents) were lined up waiting to play this inviting piece. In an adjacent field, Tom Holme‘s sound sculpture, Harvesting the Moon takes a more chaotic, everything but the kitchen sink approach. His large-scale sculpture included an assortment of keys and shaped chimes, in metal and wood that produce a variety of tones and even a brass euphonium to blow in for the adventurous. 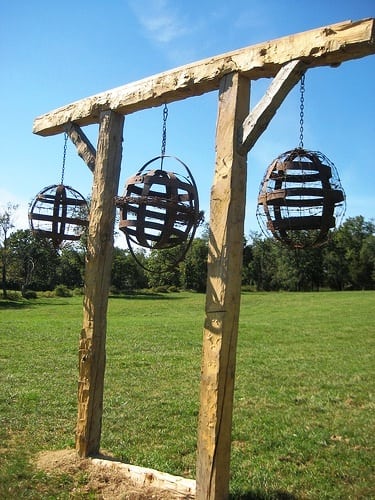 “Golgotha and the Three Vagabonds” by Michael Natiello

Michael Natiello’s work, Golgotha and the Three Vagabonds, is made of rough-hewn timbers with 3 hanging steel orbs covered in barbed wire. It looks like a menacing trading post sign and acts as a gateway from the center of the largest of the Saunders Farm fields to the back fields.

There are printed maps available in a kiosk as you enter the driveway, but it is difficult to decipher who’s who. However, don’t miss several strong works in the farthest field. Elizabeth Barkdale has a colorful line piece made of wood and green plastic, which looks like construction material. Titled, In a Sea of Grass, it could be a hip children’s playground toy but without any place to climb on. Also in the realm of playful, but with a somewhat sinister overtone is Larissa Killough’s A(void), a black rope web stretched into a tight suspension from several trees. She has left an open circle at the top, perhaps as an escape route or just a clearing space to view the sky from the otherwise dense surrounding. 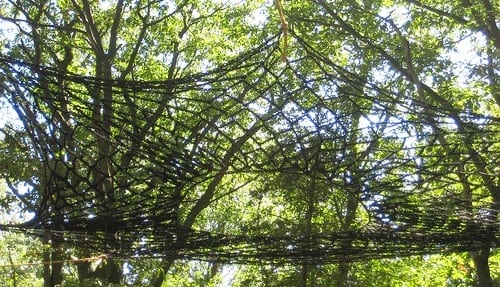 Also in that field is an interesting assemblage by George Heintz of what could be used window frames and fabric, however the stapled string stretching across the frame looks intentional as opposed to found. Either way it’s an interesting composition that harkens back to the artistic language of the Italian Arte Povera movement from the late 60’s. Works from this period often employ everyday or “poor” materials not usually thought of for artistic use.

The influence of Arte Povera can be seen in several pieces in this exhibition — as it is now prevalent everywhere in the art world. Contemporary art exhibitions globally include works from found, discarded, reused or upcycled material. In a nearby art exhibition at the Hudson Highlands Land Trust, in Garrison, a collaborative group of artists called HFA (Habitat for Artists) also reuse discarded construction and housing material to create a small village of 6 x 6 x 6′ art studios. 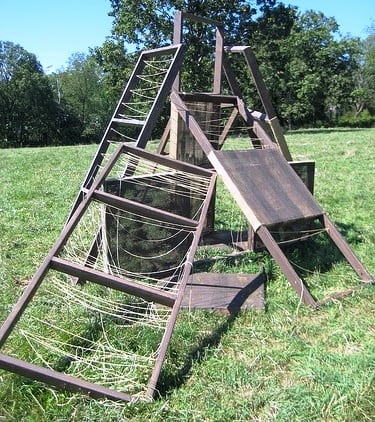 Winding back towards the western edge of the farm, the most daunting and physically compelling work is by Alex Uribe, a 20ft tall totemic sculpture made of smooth, thick logs, which come to a point at the top (tee-pee) style, held together with a chain. Whether these logs were found on site or not becomes irrelevant, as they could have been, but this piece feels comfortably at home in this environment. It lends itself to reflection not only about the surrounding wooded landscape, but to a distant past when this form would have been instantly recognizable as shelter or kindling.

Two other works caught my attention towards the end of the route. The first is a series of painted fabric scrims in the trees by Sheilah Rechtschaffer titled Camo-Pop with a camouflage pattern and coloration. The slightness and gentle gesture of hanging this shimmery fabric in the trees, catching the streaming sunlight, is offset by the association of camouflage; hunting and ongoing warfare. These thoughts feel somehow out of place in this pastoral setting, and so are all the more striking.

Last and gentle in spirit is Hideki Takahashi’s running fabric fence, Farm Cow No. 2, with portraits of white cows, lined up from various angles and painted with an expressive calligraphic style. It’s a challenge to include painting in an outdoor sculpture exhibition, but Takahashi makes it work with his use of the meandering black fence.

The whiteness of the cows, though bold in execution, has a ghost-like quality. Is he thinking about survival of the farm, or reminiscing about farms in general? Will there be a possible future day when this farm gives way to houses as in the case with the rest of Old Albany Post Road — perhaps these are spirit cows, calling our attention to the beauty of what remains and with thanks to the dedication of the Saunders Family.

“Farm Cow No. 2” by Hideki Takahashi

The Farm Project at Saunders Farm is organized by Collaborative Concepts, a not-for-profit, non-membership organization. It is open daily from 10 a.m. to dusk at 853 Old Albany Post Road, Garrison, New York. The exhibition continues through the end of October. A mid-run reception will be held on Oct. 9 with performance art and a music program Admission is free. See collaborativeconcepts.org.

3 thoughts on “Sixty Artists Converge at Saunders Farm in Garrison”