The first meeting of the Garrison School Parent/Teacher Association (PTA) was convened Sept. 13 around the focal point of: how to best facilitate communication between parents and teachers. The meeting broke into two groups: one elementary-focused and one middle school-oriented, to discuss parent/teacher communication issues.  The format was that a designated parent (Jenn Lee for the elementary group and Karen Drotar for the middle school) would raise a concern, the teacher or teachers would respond, and then the floor would be opened up to other parents to comment or ask additional questions.
Philipstown.info sat in first at the elementary group, where the overall theme was how much information should the parent be providing to the teacher on any difficulties a child might be going through in his or her home life, (i.e. was it best to alert the teacher to this situation, or would the teacher prefer to ascertain what might be causing unusual classroom behaviors independently.)  Both Mrs. Dodge, who teaches second grade, and Mrs. Waters who teaches fifth, concurred that all information was valuable and that sharing was welcome, “even the minutiae.”  They agreed that each teacher had his or her own preferred method of communication, be it notes written daily, emails or phone messages. Mrs. Dodge said “A heads up is perfect.  Whatever you want to have.  We’re all approachable; don’t be shy about asking for a conference.”  Several parents expressed appreciation for the “double copies” provided of pertinent administrative school materials, for two household families. 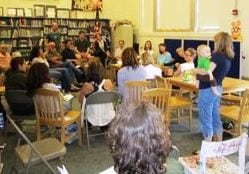 The elementary group in discussion (Photo by Alison Rooney)

The elementary teachers, along with principal Stephanie Impellitiere, expressed a desire for increased stability in advising after school pick up arrangements, either through standing arrangements made by the week, month, or year.  All of the teachers noted there are often constant disruptions, sometimes with the in-classroom phone ringing 10 times a day, by parents phoning in pick-up changes.
The focus of the Middle School group was communication about study habits and organizational techniques.  The teachers urged the parents to check their children’s planners every night, and said that they should look to see the word zero, or none, written, to indicate that there is no homework in any particular subject on a given day.  A parent praised the Middle School teachers for “ramping up” expectations of students incrementally, from sixth to eighth grade, saying how pleased she was to hear her child say “okay, I don’t have homework tonight, but I have a test at the end of this week, so I’ll study.”  The teachers seconded this, “It’s amazing to watch.  The child grows and the team allows them to take the reins and learn on his or her own. Our goal, as we tell the students, is ‘we want you to dazzle.'”   Parent Beth Greco asked if they found it challenging to have some students three years in a row.  A teacher responded “No, because they change and grow so much—and they’re in the midst of adolescence, so there’s never a dull moment.”
The meeting began with an introduction of the new PTA Executive Board.  Charles Matkin, the 2010/11 president, introduced his fellow officers, Marilyn Walker (vice president, programs), Beth Greco (vice president, fundraising), Melinda Higbee (treasurer) and Theresa Orlandi-Flanagan, (secretary). Tributes were made, and gifts given to the outgoing PTA Board, including last year’s president, Chrissy Colasurdo.
Marilyn Walker spoke of the many ways parents could volunteer for PTA-sponsored events and programs, noting that “there is a place for everyone,” whatever time constraints are involved.  Current PTA-affiliated programs with volunteering opportunities include the hot lunch served once a week, book fair, school concert refreshments, Field Day, the science fair, the ‘Welcome to GUFS’ committee, and the “Respect for Self, Respect for Others” program.
Discussion ensued relating to the close to 70 percent response rate to the recent PTA “How Are We Doing” survey, which asked members to rank the importance of PTA activities.  The school directory came out on top, followed by assemblies, the Science Fair, PARP (Parents as Reading Partners) and Field Day.  Last year, record fundraising resulted in a surplus of money, and perhaps in light of this positive financial report, all present said aye in approving this year’s budget, which was tailored in its allocations to the preferences given in the survey.  Teachers were reminded that they may apply for small “mini-grants,” for classroom educational purposes.
This year, the PTA has stated that it wishes to work on education initiatives.  To that end, a new science committee has been started, to develop science programs outside of the Science Fair. A language arts initiative has an aim of bringing parents in as partners in learning.