Think about it.  When was the last time you were able to head out to a nearby movie theater, take in a compelling and thought-provoking film, and then engage in a dialogue with the filmmaker, right on the spot?  If you were living in New York City, you could head for Film Forum, or the Walter Reade. But more likely than not, it would be sold-out, or you’d have to stand in line for hours to get in, or you’d have to be a member of a cultural institution just to get access to the possibility of purchasing tickets. Depot Docs affords Philipstown residents an opportunity not often duplicated elsewhere – even in the city.  Six times a year, directors and/or producers of some of the most riveting recent documentaries are invited to Garrison’s Depot Theatre to present their work, field audience questions, and truly get up close and personal afterwards at a post-screening wine and cheese party.

The first stirrings of Depot Docs began when Garrison’s Stephen Ives, a leading documentary filmmaker and founder of Insignia Films, wished to hold a Garrison premiere – for his friends – of what was then his most recent film.  Ives approached Claudio Marzollo, Chairman of Philipstown Recreation regarding bringing in equipment and screening the film at the Depot Theatre.  Marzollo decided to purchase a projector and screen, and asked Ives to come up with some ideas for video and film programming at the Depot.  After conferring with Cold Spring’s Toby Shimin, a highly regarded documentary film editor, Ives decided that a “go with what you know” approach was best, especially as there were a few places in the region where independent features were screened, but there was nowhere one could go to see a documentary in a theater setting.  Six months later, the series got off the ground.  It has been a success from the start, with most evenings selling out.

Ives and Shimin, together with Jenny Evans, Don Kleszy, Annette Solakoglu and Erika Wood comprise the Depot Docs committee, which chooses the films and handles all the logistics of each screening. In what Ives describes as “a very democratic process,” they whittle the many potential candidates down to six.  Much is considered in the whittling.  With many committee members working in the documentary film industry, quite a few naturally travel for work each year to the Full Frame Documentary Film Festival in North Carolina.  In addition, members are continually passing around “screener” DVDs of potential films.  Aside from personal reactions (if one out of the six truly despises a film, that’s enough for the committee as a whole to give it a pass), the hardest part of choosing is a tie (3-3) vote. That’s when “some horse-trading takes place.” Ives calls the criteria “as simple as will it captivate?”  Or, “Do we love the movie, and is the filmmaker local?” Local means does the filmmaker either live in the New York area, or does he/she pass through New York City frequently enough to be detoured up to Garrison? If the filmmaker resides in Paris alas, but no.  Sometimes the committee just gets lucky, as was the case when Robert Kenner, the director of Food, Inc. just happened to swing by New York City en route to a private screening in London for Prince Charles!

When possible, the committee tries to tie in themes with what might be going on at a given time of the year, i.e. election season.  Ives notes that they also give considerable weight to films that have made an impression on them, but have no distributor.  Other factors include “is it about to be broadcast on HBO?; will it be nominated for an Academy Award?; do we have to pay a distributor?”  They also aim to have an “uplifting” film end the season in June each year. 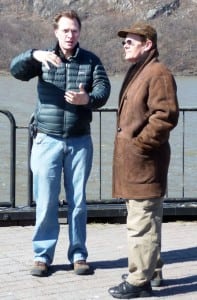 Stephen Ives (l) down at the Cold Spring waterfront in with visiting Depot Docs subject Philippe Petit in 2009. (Photo by Erika Wood.)

The committee seeks to have special events pepper the season, for example, evenings with a seminal documentary filmmaker such as Peter Davis, director of Hearts and Minds, Al Maysles, who spoke after a screening of his Gimme Shelter, and D.A. Pennebaker, who did the same with his Don’t Look Back.  Generating the biggest frisson of excitement was the surprise visit of Philippe Petit, who delighted those attending the Man on Wire evening two seasons back.  Ives notes that it was the late Matt Shipman, a loyal sponsor of Depot Docs, who made Petit’s visit possible.  Shipman also presented Depot Docs with a challenge grant for the purchase of a new, high-definition, projector and screen.  The challenge has been met, and the new equipment will make its debut at the October event.

Other sponsors, who, according to Ives, “make it possible to run the series,” are the Highlands Country Club, The Tavern Restaurant; Brian Higley, Landscape Architect; Glynwood Center; Sheila and Ru Rauch; and – this just in - brand new sponsor Philipstown.info.  Other support comes in from Garrison Art Center, often the host of the post-screening reception; Viscount Wines, which provides the whites and reds served at the reception at a great discount; and Alley’s Way Car Service, which extends a discount on the Town Cars often used to bring the director back to New York City.

There’s “a delicate alchemy” in pulling all of the logistics of the evening together, according to Ives, who mentions mopping up wine after midnight as one of the less glamorous of the committee’s tasks.Ã  But the reaction from the visiting filmmakers and the audience makes it worth it. Ives says [the filmmakers’ reaction] “is incredibly heartwarming.  They love the experience of being here.  They love how intelligent and thoughtful the audience is and how smart the questions are and they love the Depot Theatre itself.  Sometimes they stay overnight or for the weekend.  The response is universally positive.”

This positive response, over four successful seasons, has made filmmakers eager to journey to Garrison.  Ives pronounces it “so gratifying to see it fit in so well with the community.”  People ask why there can’t be, say, once a month screenings, but the aim is to keep each evening as a special event.  For that same reason, subscriptions to the often-hard-to-get-tickets-to screenings are not in the cards, for, as Ives notes, “buying tickets months in advance often leads to schedule conflicts, and we don’t want to have paid for but empty seats in the theatre.” As Ives says, “The beauty of it is there’s such good work out there now.  The challenge is to get six great film-makers to Garrison each year, but it’s not a challenge to find six great films.”

The fifth season of Depot Docs gets up and running this Friday evening, September 24, at 7:30 p.m. with a screening of Street Fight, directed by Marshall Curry. See the Short Subjects section of Philipstown.info for more details on the film. Tickets for the film, question and answer session afterwards and reception are $20 per person.  For more information visit the Depot Docs blogs at depotdocsblogspot.com/ or visit Depot Docs on Facebook. To reserve tickets, call the Depot Theatre box office at 845-424-3900 or visit www.philipstowndepottheatre.org/