Foreseeing a brighter future with “dark skies” technology, backers of a proposed new lighting system for the Cold Spring dock held a demonstration Sept. 16, offering a look at updated railing options as well.
For more than 3½ years, village boards under two mayors have explored the possibility of restoring the 19th-century ambience to the waterfront, allowing mountains and stars to re-appear in the nightscape. Advocates of the new lights say they would also enhance security, meet standards for fixtures that withstand high winds, and improve maintenance and energy-usage, thereby saving tax money. Last week’s display showcased goose-neck lampposts and thigh-high bollards, both proposed as replacements for the existing waterfront lights, which despite a graceful stance bear signs of deterioration. The new lampposts would stand close to the shore while the bollards would go on the peninsular dock. 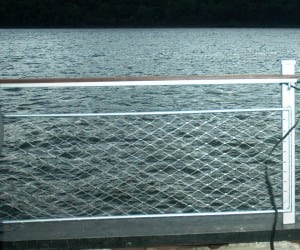 The demonstration began before dusk when James Hartford of River Architects and Mayor Seth Gallagher removed a section of the present railing, which fails to meet safety standards,  and temporarily installed two options for replacements. One fence piece resembled a Victorian, wrought-iron fence. The other looked like a glorified chain-link fence, but almost melted into visual nothingness against the water below. Meanwhile, Andrew Pidala, of Pidala Electric Inc., prepared the proposed lights, as local residents roamed the dock, anticipating the formal demonstration planned for the benefit of the village’s Historic District Review Board. In time, Trustees Bruce Campbell and Airinhos Serradas also arrived and attendance grew to about 20. 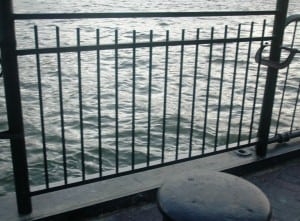 After darkness fell, the existing tall lights were extinguished and one of the proposed new lamps and two bollards came on. The mountains could be easily seen. By comparison, with the existing lights, the mountains all but disappeared into nothingness and many stars were blotted out. The short bollards also provided ample light for reading and writing while more clearly defining benches, obstacles or people on the dock. “The idea” behind the bollards “is good illumination on the ground, but so that you can still see the mountains” and the Hudson River, Hartford explained. “We’d have one at every pole” on the dock “and two at the cannon,” in the middle of the dock, he said. Andrew Chmar, executive director of the Hudson Highlands 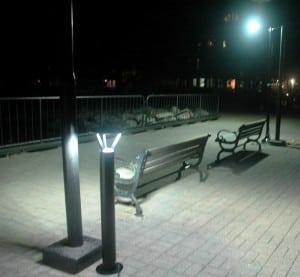 A bollard and proposed new lamppost light the bench area.

Land Trust, eyed the bollards. “The darker it is, the better sense you get of the light they throw off. It’s a lot,” he said. His organization supports the proposed lighting and railing upgrade and has raised the money to fund it, sparing the village.
The proposed new railings drew praise from passers-by, but most reaction focused on the lighting. Phil Heffernan, a former trustee, gestured toward an existing light pole. “When all these lights are on I feel like I’m in a gymnasium,” he said. “I think what they’ve proven here tonight is that you don’t have to have high and exposed bulbs to have light.”
Other positive comments drifted across the dock:

“It is much nicer!

But not everyone was pleased, especially in regard to the bollards. 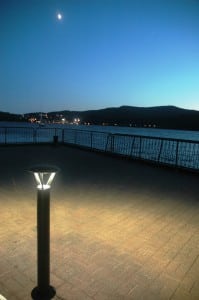 A bollard lights the dock, under the moon.

“I think these are about as unacceptable as you can get. The word is unacceptable, Seth!” one man told the mayor. “What are we accomplishing by going with the bollards?”

“We don’t get the glare,” the mayor replied.

The existing tall lights prompt people to avert their eyes, Heffernan put in. “It’s closing your eyes so you really can’t see well,” he said.
The chairman of the Historic District Review Board, Al Zgolinski, sounded unconvinced of the need for a change. “With the overhead lights” currently in use, the dock “looks like a public space you can see,” he said.  He told the mayor and Hudson Highlands Land Trust, with whom Hartford has been working, to bring detailed drawings to the review board, “so we can move stuff around on paper. That would be the next logical step.”