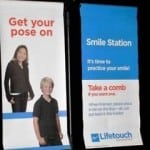 “School Photo Day” — three little words which flood the mind with memories.  Pull out the photo albums and there it all is:  from the barrettes and mary janes, the bow ties and starchy shirts, to the pained expressions of twelve-year-olds, and the awkward fusion of graduation regalia with the cool cat individualism of being seventeen.
It’s amazing how these photos can trigger the most indelible details from one’s distant past. When I look at my fourth-grade class picture, my mind still goes “oh, there’s Johnny, who used to pull strips off his shoes and eat them (really!); and Gwen, who had the shoes I wanted—but she was a little stuck up; or, tucked away in the back row, Scott, who always got sent to the principal’s office. Oh, and there’s me with those weird glasses!” 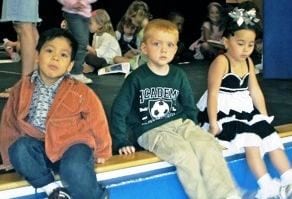 Wait - you're taking our photo Again?!

It will be no different for the Garrison School children who gathered for school picture day last week.  Class after class paraded into the gym for this ritual, forms in hand, all in a line, one last comb, check the mirror, smile, click, next. In charge of it all was yearbook coordinator Mrs. Caliendo.  She described the day as “Fun. Stressful, but fun.  I get to see all of the kids dressed up, I love it.”  The day seemed to run very smoothly, aided by some “tweaks” this year from Mrs. Caliendo, and a brand new type of camera used by the photographers, Life Touch Studio, which moved the children through at a rapid clip. 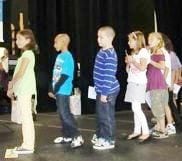 Philipstown.info watched four classes file into the gymnasium and head up onto the stage for the big occasion. First up was a kindergarten class, and it was surprising just how well they were behaving as a group just a few weeks into their school experience.  Most were excited, a few looked a little uneasy about it all, but all looked adorable.
First graders came next, trying to figure out just how to comply with the “don’t put your hands in your pocket” instructions most creatively. Then those seen-it-all-before third and fourth graders, who occupied themselves with “I’m taller than you are — no you aren’t, your hair’s just higher” comparisons, and who turned their combs into musical instruments, swords and anything else they could think of.  One boy wanted the comb left in his hair for the photo, “I like this look.” Knowing that his parents might not like the look quite so much, it was removed at the authorities’ insistence.
Not even the teachers and staff escaped from photo day, though some engaged in special pleading with the photographer: “from the neck up — only — please,” and “do you retouch?” were overheard! 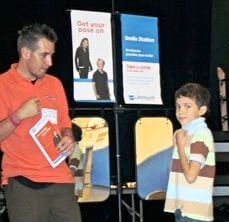 Photography studio assistant “Mike” was using his best lines to cajole students into displaying their happy faces: “Did you remember to bring your smile today?” was one of them. Mike was on day five of his “first full week doing school photos” of the season.  He was holding up pretty well, possibly because of his lineage—his father was a wedding photographer.
Outside was the domain of the class photos.  The students once again formed a line, in the age-old shortest kids in the front routine. After a Polaroid-type photo was snapped (actually now a Fuji) which could be developed on the spot for a teacher to note the children’s names based on their seating arrangements, the photographer got down to the real business at hand and asked them to smile and say “Pepsi,” and then, for good measure to smile yet again, for the third time that day, and say “Pizza.”  The seventh graders were old pros at this—veterans, no doubt of the constant self-documentation through cell phone photos that are a part of their universe now.  But, years from now, here’s guessing that there’s something about that school photo which will likely bring back more acute memories to them than a thousand Facebook poses.