Story and photos (except as noted) by Alison Rooney

The Hudson Highlands Land Trust (HHLT) and the Taconic Outdoor Education Center (TOEC) joined forces last Sunday to offer local families a fun way to work together in mental and physical outdoor challenges promoting teamwork and logical thinking.
Though billed as “Family Ropes Challenge,” to those envisioning rappelling from shaky platforms requiring superhuman rope skills, it was a bit of a misnomer. The TOEC’s “low ropes course” involves a series of way stations, positioned throughout the woods at the Center, which call upon a variety of skills to “conquer” the challenges.  Ropes played a part in a few of the challenges, but so did balance, strategy, thinking beyond the box, and conferring with teammates. A group of 18 or so, consisting of largely middle-school aged kids and their parents, were divided in two, and led through the course by the Taconic Center’s Program Coordinator John Stowell, and Outdoor Educators Susan Butterfass and Nancy Ganswindt. 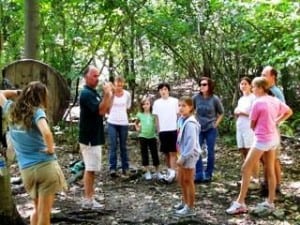 As John Stowell led one of the groups to the first challenge, he noted that the Taconic Center was a year-round facility, which hosts school groups in every season, both day-trippers and overnighters, with nine winterized cabins. Stowell led the group past the “high ropes challenge” which consists of apparatus higher up in the trees, including catwalks, a criss-cross element and a “vertical play-pen.”  This course is used by high school and adult groups. All of the equipment is designed by Project Adventure, an international company which specializes in this type of team-building apparatus.
Stopping at the first challenge, the “Water Wheel,” Stowell explained that one of the aims of the day was to “take you a little bit out of your comfort zone.”  With this, as with all of the other stops, his instructions were “I’ll describe a scenario, then you try to come up with a plan.”  His explanations always included a safety component, so that nothing hazardous was attempted. Scenario #1 was: “You are all transformed into salmon.  You have to swim upstream. You need to get your whole group of salmon-people over the wheel.  There’s no running up and flying over.  You can’t touch the outside of the wheel.  Once you’re over the wheel, you can’t come back.  You 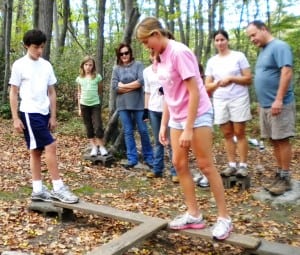 can help your teammates down.”
Similar scenarios were introduced for many of the other stops.  All entailed the group first getting together to strategize, and most included trial and error, so dealing with frustration and maintaining clear-headedness were essential components of each challenge. After each challenge, the TOEC leader asked the participants questions along the lines of “what did your group do well?” and “where could you have shown improvement?”  The leaders then gave their own critiques, always both positive and “needs improving.” Stowell’s group did quite well on the first challenge.  He praised their encouragement of each other, their planning and support, while noting that “some young people were hanging back, letting the adults step forward.”
The second challenge was more mental.  All group members had to stand on a wooden plank and were told to “line up in the order of your birthdays.  Oh, and you can no longer talk.”  In other words, the group had to figure out a way to communicate months, dates and years, in a non-verbal fashion, and adjust themselves accordingly, without leaving the board.  The group communicated well using their hands, and the mission was accomplished easily. 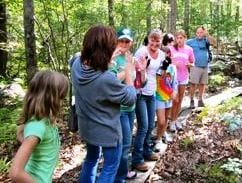 Harder challenges followed, including one called “Whale Watch” — “you’ve just bought a brand new yacht.  You don’t want anyone getting sea sick.  You need to balance it while watching the whale.”  Translation:  a rocking platform onto which all team members needed to first climb onto, and then re-distribute themselves onto the last three planks on either end, without either end touching the ground.
Philipstown.info watched both groups attempt this one, with a lot of strategies embraced and then discarded, but eventual success for both teams.  Many participants deemed this the most difficult challenge.  Asked to describe it in one word, participants on the two teams answered “stressful,”  “trepidation,” “shaky,” “complex,” “challenging,” and “frustrating.” (All in a good way, of course). The TOEC leader for the first team said “This challenge needed patience, timing and communication.  It was a little crazy in the beginning, but it improved once you got a plan.” The TOEC leader of the second team noted that “this one is different.  Right away, everybody has their own vision.  As you got further along, having one [team member] leader helped.  Natural leaders stepped out.  This one required mental patience, and not physical strength.”
Another tricky one, the “Nitro,” did involve an actual rope swing, a mock island, a “cure needing retrieval from waters infested with electric eels, alligators and piranha” and lots of strategizing.  Dialogue overhead from one of the groups participating was, son to dad: “Oh, that’s a good idea.”  Dad to son: “Actually, I wasn’t saying that, but you can try that.”  Well, how often does the course of parent/child communication run completely smoothly?  After the challenge concluded, leader Susan Butterfass asked the team what kind of teamwork was needed for that one? The team acknowledged that “different people have different abilities” and worked within that framework. 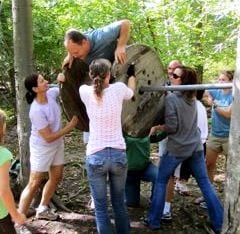 Yet another challenge, which involved transporting all participants through a suspended rubber tire, required those carried, to, in the words of John Stowell “surrender your control, and trust the members of your team.”  Stowell asked everybody “Even though you weren’t in control, did you feel safe?”
Everybody appeared to enjoy the whole three-hour-long afternoon.  Participant Emily Turchyn, of Carmel, came on her own, after hearing about it through the Land Trust.  A veteran of other HHLT Hikes, she said she “loved the interaction between the kids and their parents.” Laura and William Cumming, who split their time between New York City and Garrison, brought their two daughters, one of whom, Natalie, said that she “liked the different activities.  Each required different skills.  Meeting different people was nice too.  It was fun to do it with my parents.”
Garrison’s Kara Reynaud, who attended with her daughter Juliette, “loved it.  A great way to have fun with your kids.” Garrison’s Frank Batignani, who participated along with his mom, Kristine, and sister, Bridget, pronounced it “great for people who like to have challenges.”  Grace Carroll, of Cold Spring, attended with her parents, Seamus Carroll and Marie Wieck, said “It was great to get outside and play with my parents – much better than any video game!”
The Hudson Highland Land Trust’s Kathy Hamel attended with her son, Brendan, and deemed the day a great success, and “a first for us” — different from the more traditional hiking programs usually conducted by the Trust.  John Stowell concurred, and said that this program was a proven winner with their frequent school groups. “They’re immersed in nature here.  Sometimes that can be a hard sell.  Doing these fun activities is a wonderful conduit to getting kids outside.”
MJ Martin, the Director of Outreach and Development at HHLT echoes these thoughts in speaking of their hiking series: “HHLT began the Take-a-Hike! program several years ago in to encourage folks to get outdoors, enjoy the beauty of the Hudson Highlands, and gain a better appreciation of its natural resources.  The hikes are free, so they’re accessible to everyone. It’s our aim to introduce as many people as possible to the importance of nature.  People will only protect what they have learned to love.”
The program is likely to be repeated next year.  Visit the Hudson Highlands Land Trust website, http://www.hhlt.org/, where you can sign up for email alerts on their many programs.  For more information on the Taconic Center, which is located at 75 Mountain Laurel Lane (off Dennytown Road), Cold Spring, and their public programs, call 845-265-3773.