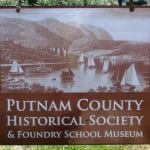 On an evening blessed by warm breezes and warm words of welcome, 180 friends of the Putnam County Historical Society & Foundry School Museum (PCHS) gathered Saturday evening to celebrate the organization and honor a widely-known resident artist and a locally famous 13-generation family.

The gala at the Highlands Country Club in Garrison drew men in attire ranging from black-tie to business suits to natty summer casuals, and women in cocktail-party dresses, floor-length skirts and sweeping ballroom elegance. Lingering for drinks and appetizers on the lawn and porch before dinner, they greeted friends, made new acquaintances, and caught up on Philipstown affairs before filing into the historic club building for the dinner and program. “This is the best gig we’ve ever had!” declared Neal Zuckerman, President of the PCHS Board of Trustees, surveying the crowd.

The first of the two annual PCHS honors, the Gen. Israel Putnam Trailblazer Award, was presented to Don Nice, whose Hudson Valley-inspired art is found in such institutions and museums as the Museum of Modern Art and the Metropolitan Museum of Art. Known as a “New Realist” in the 1960s, Nice honed his creative skills by using his G.I.-bill educational assistance to study art in Florence! He spent two years in Europe before finding a home along the Hudson River. 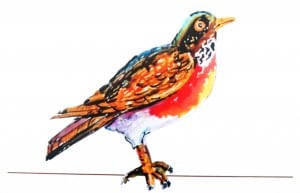 A robin, by artist and PCHS honoree Don Nice, perched on the cover of the program for the gala.

A resident of Philipstown for four decades, Nice said that in part his art stems from a desire to go beyond the “modern” art of his training, to appreciate the best work of that era but “bring it forward, not just make more of the same.” Speaking about continuing in the dominant styles of that time, Nice said, “I just can’t do it”. In the 19th-century, “Hudson River painting started as a revolt against European landscape painting.” The vision of Hudson River School painters such as Frederick Church “related to me and what I was trying to do,” he said. “So I set about trying to find ways to incorporate the river in my art.” He’s never stopped.

“Don is passionate about his work, much of which springs from the world of nature,” Gil Burke said in introducing Nice before the presentation of the award. “This valley he loves” is reflected in his art, Burke said. “You feel his integrity and the generosity of spirit that is Don.” 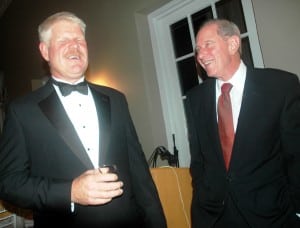 Charles Polhemus, whose family was honored by the PCHS, celebrates with Gordon Stewart, a PCHS Trustee

After another portion of the dinner was served, garnished with lively conversation, Neal Zuckerman presented the Historic Families of Putnam County Award to the Polhemus family as “an economic engine for a long time” as well as stewards of a legacy stretching back more than 350 years to the arrival in 1654 of the Rev. Johannes Theodore Polhemius, a Dutch minister.  It turns out that Rev. Polhemius (spelling his surname with an “i” later dropped), hadn’t intended to land in the future New York City at all!  He had started out from a mission in Brazil to return to Europe, only to be caught up in an adventure worthy of a Robert Louis Stevenson novel. According to a family history recently compiled by Theresa Polhemus, a PCHS trustee, a Spanish privateer waylaid his boat. The Spaniards subsequently lost their ship to the French, who delivered Polhemius to New Amsterdam. A son became a captain in the British colonial King’s Troops and a judge, dying around 1730 at age 68. Another descendant, Jordan, served in the American Revolution as a major.

Over the years, “the Polhemus family has proven the value of sustained hard work in pursuits professional and personal,” the PCHS stated in its program for the evening. Recent generations have operated Polhemus Construction, as Charles Polhemus noted in accepting the award. “It truly is an honor. My forefathers, my grandfather, my father, paved the way –  literally – to this,” he said. As president of the family business, “I have the best job in the world,” he added. After tending to office demands, “I just drive around this wonderful town. It’s my honor to have you as friends and to call this place home.” 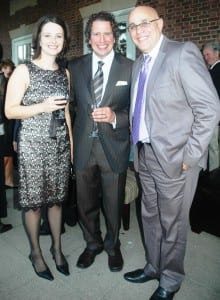 During the festivities, Zuckerman thanked the guests for attending (at $250 a ticket) and urged them to continue their involvement. The year 2012 marks the bicentennial of Putnam County, Zuckerman pointed out. “Are we going to remember what makes this county special” for the birthday, “or let it fade away as a date?” he asked. “We’ve got to start celebrating our strengths” across all of Putnam, he said. To that end, he told the audience, the PCHS is opening a museum branch at Tilly Foster Farm, on the eastern side of the county.

According to County Legislator Vincent Tamagna, the PCHS “is the icon of our historical societies in the county. This is by far the most professional; this group by far is tops.” Other organizations around the county can learn from the PCHS, which also could benefit from association with them, he suggested. Already, “I think the synergy in our historical societies is great.”