Story and photos (except as noted) Liz Schevtchuk Armstrong

As two red-white-and-blue flags waved alongside, three World War II veterans received gratitude and commemorative medals from the nation of France on Saturday (Sept. 25). The ceremony, at the Cold Spring waterfront, honored Edwin D. George, of Pomona; Angelo W. Percacciolo, of Cold Spring; and John A. Turco, also of Cold Spring, for their participation in the Normandy campaign, which began on D-Day, June 6, 1944. Each received the Jubilee of Liberty Medal, along with a certificate. They also were honored by proclamations from the Cold Spring Village Board.
Hosted by the local Veterans of Foreign Wars Post 2362 and AmericanLegion Post 275, the event drew about 100 spectators on a sunny day, while the Hudson River glittered in the background below the mountains. A guard posted the colors, with the French flag flying alongside the American, before an ensemble played the national anthems, first La Marseillaise and then The Star-Spangled Banner.  “It’s our privilege to honor these veterans,” Retired Col. Louis H. Sudholz said in opening the ceremony. “We are here to assist the people of France.” 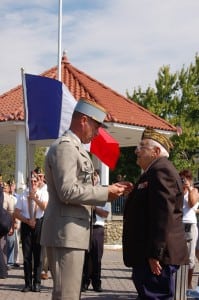 The French government’s representative, Retired Col. Francois Xavier Yves, who presented the medals, told the three that they had been willing “to give your lives for France. I have no words to thank you.”
“Once again we here who live in the Hudson Valley are blessed to honor three men whose lives were on the line,” in liberating Europe from the Nazis, Francis (Terry) Lahey, the American Legion Post Commander, said. “They were young men, boys, really.”
Turco, an electrician’s mate in the Navy, saw D-Day action aboard the USS Arkansas, one of the first battleships to anchor off the D-Day beaches. “In seas so rough that the ship’s forward decking was ripped free, John held his position alongside those booming 12-inch cannons, watching enemy fire crash into the water getting closer and closer to his ship, as our Navy delivered the critical suppressing-fire needed to give men landing on the beach a very slim chance at survival,” Lahey explained.

Percacciolo said he saw duty as “a top turret gunner and radioman” after the initial D-Day landings. A technical sergeant, he flew 35 combat missions in a B-24 with the 448th Bomber Group, 8th Army Air Corps-Army Air Forces. “France, Germany and Holland — I made missions over all of them,” he told Philipstown.info.
Lahey cited the overall air force role in the 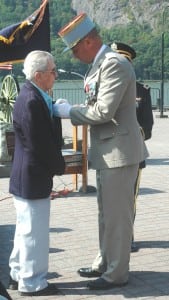 campaign. “On D-Day they owned the skies over Normandy, isolating and hammering the shore defenses and then continually crippling the Nazi war machine and softening the enemy’s resolve as the Allied forces swept across France,” he said. A private first-class, George left New York City for an anti-aircraft artillery battalion in the 1st Army. “The transition from home to Normandy was one hell of a ride, even from the wilds of Brooklyn, where Edwin went to high school,” Lahey said. “Starting at Normandy and then through four more battles across France, Edwin rode on top of a half track, tormenting the enemy with his 50-caliber heavy machine gun. And yet, here he is today, 66 years later.”
George later recounted his favorite war story, involving “the time we found a bombed-out French house, with a case of Calvados. We had a great time drinking it.” When sated, they found another use for the apple brandy — as fluid for Zippo lighters. “It would last a month,” he remembered, smiling.