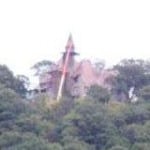 One of the most eye-catching landmarks in the entire Hudson Valley is receiving some extra attention these days. Work crews are busy installing a new slate roof on Osborn Castle, located high atop Castle Rock, just south of Route 403 in Garrison. Travelers on Route 9D can easily make out the heavy equipment rising up the full height of the castle to its distinctive turret. Chip Marks, who maintains the property, said that the work, which is being undertaken by Clemco Construction of Ossining, should be completed by the end of this fall.
The castle was built in 1880 by railroad baron William H. Osborn. Osborn served as president of the Illinois Central Railroad and also helped guide the Chicago, St. Louis and New Orleans Railroad to financial success. After he retired in 1882, Osborn lived in the castle until his death in 1894. The property remained in the Osborn family for many years. Documents at the Philipstown Town Hall list the current owner as Castle Rock LLC.
The castle was designed by architect Javis Morgan Slade. Artist Frederic Church, renowned as a member of the Hudson River School of American landscape painters, is thought to have influenced the siting and design of the building, which was added to the National Register of Historic Places in 1977. Over the years rumors have persisted that Osborn Castle was writer Frank Baum’s inspiration for the castle in The Wizard of Oz.
Castle Rock Unique Area lies some six hundred feet below the castle and is accessible for public use, however Osborn Castle itself is privately owned with no public access permitted.