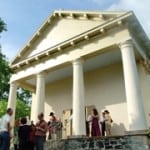 High on the long list of the “we’re so lucky to live in this area” items for music lovers are the Sunday Music Series concerts held at the Chapel of Our Lady Restoration at 4 p.m. once a month, from April through November. These free concerts, primarily classical, but extending to other genres at least once a season (witness this past Sunday’s exciting solo recital from the renowned jazz pianist Toshiko Akiyoshi), feature world-class performers and they result in full houses.
The series was begun in 2001, and has built a loyal following.  To augment support from grants and help enable the programs to continue, Cold Spring’s Gwen Laster, a violinist and member of the Chapel’s board, has put together a wide-ranging benefit, mixing together world music, folk, and jazz, played by local musicians and invited guests.  Funds raised will go towards paying the many artists who appear each season.
Laster, who plays violin in many veins, from classical to world music, and particularly, improvisatory electric jazz, was invited to join the board after she and Damon Banks, a musician, composer, and educator, who will also perform on Sunday, were married at the Chapel and the board learned of their backgrounds.  She and the board hope to expand the music presented at the Chapel and have a “diverse demographic community coming in.”  According to Laster, “this benefit is all about that — a wide array of musical talent.”

Blending their voices in harmony, singing their original compositions relating to modern life, will be Philipstown’s Motherlode Trio, consisting of Stacy Labriola, Patti Pelican and Terri Platz. Laster and Labriola teach violin and guitar, respectively to young students locally, and have previously combined their students in recital at the Chapel.

Also appearing, performing a jazz set, will be the David Rothenberg Trio, consisting of clarinetist Rothenberg, of Cold Spring, whose seven CDs include a 2010 ECM Records duet album with pianist Marilyn Crispell, One Dark Night I Left My Silent House; bassist Damon Banks; and pianist (and former Rutgers Professor of Music and Jazz Talk moderator for Jazz at Lincoln Center), Lewis Porter.  They will be performing works written by Rothenberg.
The third component of the triple bill will be a collaborative group called Conversations in Taal  led by sitar player and composer Gargi Shinde,  whose line-up for this event is comprised of Shinde, Laster and two others, including tabla player Amit Kavthekar. Kavthekar, who has been playing since childhood, was taught by tabla masters Padmashri Ustad Allarakha and Padmabhushan Ustad Zakir Hussain. He has toured the Far East and Australia, and is currently visiting the U.S. from India for a year,  teaching at the New England School of Music. Pianist/composer Rod Williams, a veteran of the New York City jazz scene who has performed with Cassandra Wilson, David Murray and Dewey Redman, among others, completes the quartet.  The concept of Conversations in Taal is to constantly have a flow of different people coming in and playing with the group. 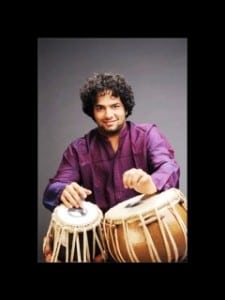 Conversations in Taal will be performing two pieces at the benefit, one each  by Shinde and Laster.  Shinde, a native of India, who has been performing since the age of ten, will lead the group in her Naida’s Song, a “pentatonic” (scale with five tones) type of raga called an “evening raga” or Hansadhwani, which is from the southern classical repertoire, according to Laster, who added that “this typical Indian classical style begins with a melody and returns to that melody in between phrases.”

For the curious, according to http://www.ragopedia.com/, ragas are often designated to be played at appointed times of the day or night based on body and mind changes which occur at these differing hours.  There are also seasonal ragas.
Laster’s composition is called “Yoga Gridlock.”  The piece is inspired by “the joy of finding a perfect place to lay my mat down in a crowded yoga class!”  Laster describes this work as “based on pentatonic scale with altered tones.  It has a constant, ongoing tempo and a rhythmic feel about it.  Since it’s new, it will be a conversation—interactive.”

Asked about how rehearsals proceed with a group which has not only not played together , but which includes new instrumentation and new material, Laster said that a flurry of MP3 file exchanges have been going on, and that this is often typical of not only rehearsal processes for those not joined by geography, but for actual recording as well.  Whereas once, everyone gathered in a recording studio, economics and logistics often make that impossible these days, and computer file-sharing of recorded music pulls everything together.  Laster related that she was recently present when two people who had been working collaboratively for a year on a project finally met.  Laster has been featured on albums of many artists whom she has never met, and this is standard practice.

Volunteering their time and expertise for this benefit are Al Hemberger, who is, according to Laster “always on call, 24/7 to lend equipment,” and local actress and director, Laura Hicks.
The concert lasts from 3 until 5:30 p.m. and contributions of $10 or more will gratefully be accepted at the door. Free parking is available at the Metro-North lot, adjacent to the Chapel. For more information visit www.chapelofourlady.com.

For information on Gwen Laster, including her book Music for the Creative String Player and her future performances, including a Nov. 14 show in the city with Damon Banks, visit www.gwenlaster.com/