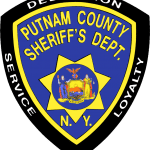 The Putnam County Sheriff’s office reports the arrest of a Westchester County man and his female companion on criminal charges stemming from the reported burglary of a Putnam Valley liquor store.
A joint investigation between the Putnam County Sheriff and the New York State Police has resulted in the arrest of 43 year-old David James Maronza of 3341 Old Yorktown Road, Yorktown Heights, New York and 57 year-old Patricia Ann Dolan of 407 Sundial Court, Wilmington, North Carolina. They are being accused of forcibly entering Hollowbrook Fine Wines and Spirits, located at 9 Oscawana Lake Road in Putnam Valley and have been charged with Burglary in the Third Degree, a class “D” felony.  The burglary occurred during the night of Aug. 25, 2010.
Mr. Maronza and Ms. Dolan were taken into custody on Sept. 22 and were arraigned before Putnam Valley Town Justice Gina Capone.  Both are being held at the Putnam County Correctional Facility in lieu of bail or bond. A conviction may result in a term of incarceration of up to seven years. The couple is facing additional criminal charges in Westchester County which were lodged by the State Police.