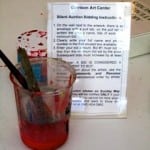 As the sun rose in the early hours of Saturday, Oct. 2, some seventy artists took to favored outdoor locations all over the Hudson Valley, tools of their trade in hand, to capture what they saw, and “bring it back alive.” From that perfectly imperfect leaf, to those oft-rendered Hudson vistas, each artwork was bound for the same eventual destination – he tent at Garrison’s Landing – to be auctioned off in late afternoon at Garrison Art Center’s twice-annual “Artists on Location” event.

Held each year in spring and fall, this signature Art Center event is a major fundraiser and community pleaser, and has the added benefit of assisting both the Art Center and the artists. Now in its 27th year, the Artists on Location events, together with two other fundraisers, generate, according to Art Center Executive Director Carinda Swann, “at least 30 to 40 percent of our overall budget. Without them we couldn’t have our programs. And the nice thing is that it supports regional artists and you get a painting as well.”  The Art Center and the artists do a 50/50 split of the proceedings. 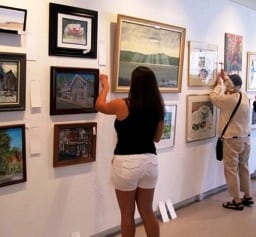 The parameters of the event are straightforward.  Up to 85 artists are invited to apply to participate. They agree to register at 7 a.m. that day, then set forth for their Hudson Valley location of choice, and return to the Art Center no later than 2 p.m. with their completed artwork.  In addition, they may submit previous work for the concurrent Silent Auction, which begins on the same day, and runs through Oct. 10 – just over a week – with over 100 works.  The individual artists select the opening bid amount for the silent auction paintings, which are exhibited in the Art Center’s galleries during that week, with bid sheets.  Bids may be made in person or over the phone during the following week, with the auction ending at 5 p.m. on the 10th.  People can call the Art Center at any time until then to check the status of their bid.

By mid-morning on the Live Auction day, artists were spotted up and down the banks of the Hudson, some nestled into chosen spots and others finding a special aerie on which to perch their easels.  According to Swann, most artists choose “a contemporary take on the Hudson River School.”  A peek at the auction offerings revealed some “village-scapes” as well, and even an abstract or two. 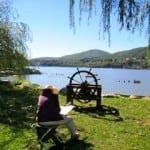 Painter Robert Eckes had staked a claim on a spot quite close to the Art Center, but set back a ways, his painting incorporating a white picket fence and some of the architecture near to the river.  Eckes, who is self-taught, has been painting for about 20 years, and has been coming to Artists on Location for many of them, always selling his work, which consists mainly of paintings of the Hudson Valley region (see http://www.hudsonvalleypaintings.com/ for a look.) Eckes feels “very fortunate that Garrison Art Center is still going strong. It’s great that this revenue supports the Art Center dramatically.  There’s nothing better than to come out on a fall or spring day and just paint.  This is about as perfect as it gets.” 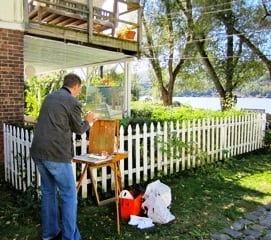 Art Center board member, painter and instructor Martee Levi pronounced the silent auction “one of the best I’ve seen. I’ve been hanging them for 15 years, and there’s really strong work from new people –  I’m very impressed.”

After afternoon refreshments, which clearly contributed to the success of the endeavor, the auction action got underway at around 5 p.m. with father and son auctioneers George and Nicholas (Nicho) Lowry, of Antiques Road Show, wielding the gavel.  An enthusiastic crowd (150 chairs were set, most were filled, and many more people stood around the perimeter of the tent.)  Multiple bids were often the order of the day as friendly, spirited competition ensued.  Bidding for the live auction art works began at $100, and the highest bid of the day was $3,000 for a painting by a regular participant, Kevin Kearns, of Newburgh. 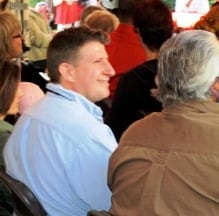 Garrison School art teacher and painted Coulter Young IV, listening to the bidding on his work

A particularly pleased looking artist was Coulter Young IV, the new art teacher at Garrison School, whose painting was the subject of some back and forth bidding. The eventual winner was Donna Pidala, mother of one of his students, who accompanied her. Young said that he has participated in Artists on Location “on and off for 14 years, 7 times I think, and each time I keep changing my medium.  This one is oil, and I’ve done pastels and charcoals - it’s an evolving process.”  Asked about the role of Garrison Art Center in the community, Young responded that “it’s a great resource for the school.  A lot of my most advanced students have taken courses here, and it shows. Their drawing skills and ability show training.” 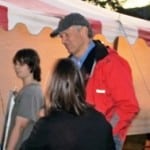 Enjoying the afternoon by the river were former New York State Governor George Pataki, and his wife Libby, who were watching the auction and socializing with neighbors. Pataki noted that “Libby and I try to come every year.  We like it a lot.  It’s a great event - lots of fun, and tremendous art.”  Asked if a painting entitled Main Street, Nelsonville, which had just come up for auction, had caught his eye, he replied that “I loved the Main Street, Nelsonville - if we hadn’t bought three already.”

The paintings in the Silent Auction remain displayed until this Sunday.  Gallery hours are 10 a.m. to 5 p.m., Tuesday through Sunday.  Visit www.garrisonartcenter.org/ or phone 424-3960 for more information.
Photos by A.Rooney