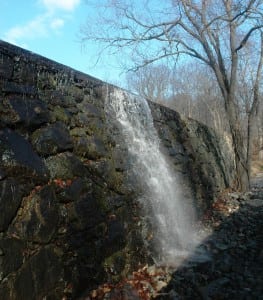 The water-spill splashes over the Lower Dam in autumn 2009. (Photo by Liz Schevtchuk Armstrong)

A new study commissioned by the village itself found one of Cold Spring’s dams  in “unsound” condition and two more “inadequately maintained,”  though all remain stable. The assessment by Tectonic Engineering & Surveying Consultants, of Mountainville, N.Y., gave the “unsound” rating to the Upper Reservoir Dam and the “Inadequately Maintained” rating to the Lower Reservoir Dam and Foundry Brook Dam. Located northeast of Cold Spring and Nelsonville, the three dams serve the Cold Spring water system, which supplies clean water to Cold Spring, Nelsonville, and parts of Philipstown. The water system itslef dates from 1894-95.

The rating terms Tectonic uses come from New York State Department of Environmental Conservation, which established four grades for a dam’s condition — No Deficiencies Found, Inadequately Maintained, Unsound, and Unsafe. Separately, the DEC has listed the Upper and Lower Dams as Class C, or in the High Hazard category, and the Foundry Brook Dam as Class A, or “Low Hazard.”  However, “hazard levels” refer not to dam structures themselves, but describe potential threats to properties and roads downstream of a dam should trouble occur, according to Cold Spring Water Superintendent Greg Phillips.

In its 105-page report, Tectonic noted that the Upper and Lower dams were built to supply the West Point Foundry and that Foundry Brook Dam apparently pre-dates 1934. The exact years of construction are unknown. The West Point Foundry was established in 1818, changed ownership in 1897, and shut in 1911, suggesting the Upper and Lower dams could date from the factory’s early days. The village formally acquired the two upstream dams in the 1920s.

For all three dams, Tectonic found spalling — chipping and breaking-off of stone or concrete — and seepage as well as other problems. It recommended a series of repairs and upgrades, ranging from clearing trees and vegetation to the rebuilding of concrete walls and related improvements. In some cases, even the repairs themselves made years ago need fixing or replacement.

For instance, as Thomas J. Critelli, Tectonic’s executive vice president and chief operating officer, told the Village Board Sept. 28, the original stonework on part of the Upper Dam “had deteriorated a long time ago” and at some stage was covered by a concrete layer or cap. Now, the cap has spalling and has loosened, Critelli said. “There’s one spot, maybe 50 “¦ 60 feet long, where it’s totally missing and water can get through the structure when it’s at it’s highest level and possibly move some of the masonry. You don’t want that to continue.” His firm’s written report stated that “the concrete facing should be replaced or another means of sealing the downstream face of the stone dam should be constructed. If the flow through and over the dam at this location is left to continue, it may eventually lead to a dam failure.”

Critelli also told the board that the engineers discovered problems related to the spillways, dam components that discharge the flow of water. “We did find that the spillway capacity for all three dams was less than what would be required. So there’s an issue with the spillways needing to have a capacity to pass a larger amount of water than they do, to prevent the dams from being over-topped,” he said. He softened that sobering announcement with a bit of relative good news. “In this case, the over-topping of the dams is a little less critical than it would be if you have earthen embankments,” which would wear away more quickly, he explained. “But it still has to be dealt with, because when the water cascades over, you have to have the right structure at the base of the dam to accept the water [volumes], so they don’t erode the base of the dam.” He also noted that “the stability of all three dams was found to be suitable for the various types of loading,” such as when ice forms and “loads” the structure.

Although dams are expected to withstand floods, Critelli observed that in a rare, freak storm whether the dams hold or not becomes less relevant, in a sense. “It could be that the storm alone inundates things downstream, regardless of whether your dam breaks. For smaller storms, when a dam is breached, obviously it’s going to affect the downstream area. But at a certain point,” with a storm of exceptional intensity, he added, “it won’t matter any longer whether your dam fails or not, because everything is going to be flooded anyway.”

The report did not provide estimates of the cost of work required. Critelli said Tectonic hoped to supply village officials with numbers by mid-October. Under an overall contract of $47,460 awarded in January, Tectonic is handling several parts of a comprehensive dam-improvement program; in August it drafted an Emergency Action Plan, a safety primer for use in crises affecting the dams.

Both the approximately 270-foot-long Upper and the 328-foot-long Lower Dams were made of laid-up stone and retain reservoirs of about 9 acres each. Viewed from the Lower Dam along Foundry Pond Road in the North Highlands section of Philipstown, the two resemble a single, irregularly-shaped lake, divided in the middle by the Upper Dam.  They connect to and feed Foundry Brook, which courses through woodlands to the 185-foot-long Foundry Brook Dam and treatment plant on Fishkill Road, about 2.5 miles from the other dams. A “concrete gravity” structure, Foundry Brook Dam serves a reservoir about 1.6 acres in size. From there, Foundry Brook continues on into Nelsonville and Cold Spring.

Specifically, the Tectonic assessment described flaws and needs associated with each dam. These include:

In his summary to the Village Board on Sept. 28, Critelli said that “the Lower Reservoir Dam might be considered in better condition even than the Foundry Dam.” At the Foundry Brook Dam, “water actually flows through in spots, so it’s not even serving truly as a dam.” Also, seepage in the training or restraining wall could exacerbate deterioration and “you could lose the training wall,” Critelli said.

Mayor Seth Gallagher proposed Sept 28 that the village focus first on the Upper Dam, the one that received the “unsound” rating, and “figure out where to go from here. It’s in the worst condition.”

Tectonic reported that when its team visited the site, “some of the missing concrete was observed on the bottom of the reservoir,” apparently pieces of the concrete cap. The report also noted that Upper Dam  spalling and other damage had been detected 29 years ago. Critelli suggested that when possible the village bundle repairs and portions of work together, to promote efficiency and make things easier. “It’s always best to do as much as you can at one point in time,” he said. But he agreed with Water Superintendent Phillips about proceeding with deliberation.

“I think the biggest thing for us to worry about is not to get involved in something that is going to get undone by the next, larger phase,” Phillips advised. “In other words,” he said, the village should “not put the cart in front of the horse just to get some work done,” only to find, in the not-too-distant future, “we’re into the larger phase and taking it apart” again.

“You don’t want to have to do it twice. You’re right,” Critelli concurred.