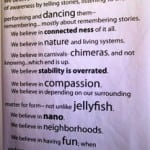 An amoebic structure.  A village square.  A live installation. Percussive sampling. Truffles.  Can’t quite put all of these things together into one neat and tidy package of ideas?  Lily Zand, founder of the Beacon store/architectural practice/performance space/chocolatier School of Jellyfish wouldn’t want you to.  As she says, “it’s not this or that.”
Zand, a Cold Spring resident, opened the space last December, with a stated mission of “incorporating a community outreach in form of an organic cafí© and bar which promotes neighborhood trust and curiosity and provides an ongoing community forum, resulting in more accessible green architectural consulting for all.” Deciphering the above comes down to something Zand, an architect and professor, says is integral to the discipline of architecture: learning to look at the details and the whole at the same time. Zand, a Cooper Union graduate in architecture, with a Masters in Design Studies from the Harvard School of Design, is a fervent believer in giving more than you take, and in the importance of looking at the world and understanding that everything and everybody is part of a collective system, humans dependent on ants, and so on. 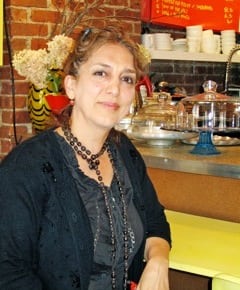 To engage the community in discussion and then practice of this ethos, Zand has turned to a “village square” concept, and that’s where the chocolate comes in.  People drawn to School of Jellyfish through its bar and cafí© are then invited to examine the objects, books and installations found in the space, and to converse in a dialogue with others.  It’s a conceptual premise, but rooted in fun, according to Zand, who feels that these issues need to be presented in a tangible, accessible way, and that thinking global is not necessarily the best way to change energy and resource consumption, but that “like fireflies, ideas have to flicker and then they gather into bodies—there’s no rush.”
With an ever-changing array of artwork, music, and performance, and with furnishings which can be changed to accommodate whatever is going on at a particular event, the interior of School of Jellyfish is designed to reflect a “fabric in perpetual motion” where shifting ideas are part of the motion.  Zand gives a tour of what’s inside the space, and its purpose is being there. A shelf holds bowls with various objects.  When school groups (such as a recent one from Beacon’s Sargent School) come to visit, Zand asks them questions about these objects: “Here are a beehive, a branch, pieces of paper. Take the piece of paper and fold it up in ways which makes it stronger.” In other words, she is encouraging the children to think about objects, natural and man-made, and, rather than disposing them or taking them at face value, to conjure up ways to use them that are sustainably constructive. 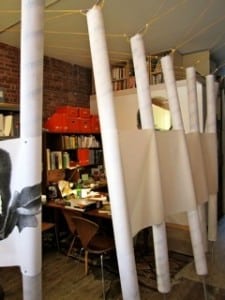 The insides of rolled up carpets, now used as structural supports

Another part of the space is separated off by pole-like supports which are simply the inner tubing contained in rolls of carpet.  Zand notes that “Everything is part of the system.  We learn to separate things and then we put energy into connecting things, which is a waste.  Perhaps we can undo it.  That by itself is socially, economically and physically comforting—helping to understand how things do relate.  This has to be part of the everyday practice of life.  It’s the basic, elemental way of looking at the world.”  In speaking of the benefits to the students, she says that “when it’s time for them to vote, for example, they can call back on it, remembering that it’s not ‘just me’ — nothing you do is separated from anyone else.”
The architectural side of School of Jellyfish is based upon Zand’s concern that “80 percent of environmental damage in the world is done through architecture.  There is a huge amount of responsibility on the builder.  We have used housing as a way of alienating ourselves from nature.  Many use air conditioning from March through November. “A waste of energy.”  Zand gives specific examples of things she’d like people to think about such as taking the opportunity, when building, of putting a second window into an opposite wall to encourage cross-ventilation, and doing it at the time of construction, saving energy. 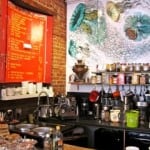 Another example she cites of avoidable energy waste is using a leaf blower.  Noting that most people use one “because it was left in the garage” or “my dad used it'” — why not use a rake instead and with the exercise expended in raking, save the money spent in going to a gym?  Zand stresses repeatedly that “it’s the little things” and it’s these little things she would like everyone to think more about.  Thus School of Jellyfish advises on design, renovations and remedies in particular, but is infrequently involved in construction.  They emphasize both sustainability and affordability, with many of their design ideas presented to clients as kits, from which clients can extract what they wish, build or alter now or later, and otherwise take control of. 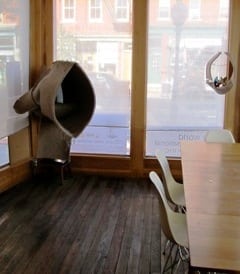 The performance space side of School of Jellyfish reflects the shape-shifting as well, with many mixed-media events incorporating two screens, often multiple instruments, sometimes dance, and always geared to the flexible space.  Zand makes an effort to find “gigs that are alternative to what’s out there; stuff that people can’t find easily.  I ask them to do a piece very specific to School of Jellyfish and then I mix them—they’re unrehearsed. Every time it happens differently. It surprises me all the time.”  Such spontaneity occurs every Second Saturday, and on other weekends as well.  The last event drew “at least 100 — not all at the same time,” by Zand’s account.
School of Jellyfish has found a welcoming home in Beacon, as “the urban fabric is accepting of new faces” in Zand’s description. A group of regulars comes often, and the weekend crowd from Dia wanders in frequently, attracted by the “daily dish” of something organic on Saturdays and Sundays, and by those alluring chocolate truffles.  While it is often the food and drink which get people in the door, the “hand-picked” library engages 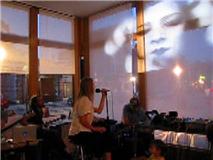 many and the whole space inspires conversation, according to Zand.  “Some people just get a cup of coffee and go, which is fine. A lot just want to have a look, some walk out, some look at books, some ask questions.”
To immerse yourself in ideas—and pleasures—of the School of Jellyfish, just stop by. They are located at 183 Main Street in Beacon and opening hours are 11:30 a.m. to 7 p.m. on Fridays and Saturdays and from noon until 6 p.m. on Sundays.  For more information visit http://www.schoolofjellyfish.com/, visit the Facebook page, or phone 845.440.8017.