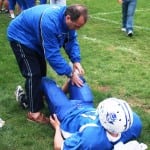 Anyone who doubts that concussions are not an important issue for high schools across the US need only Google the term “high school concussions” to see 195,000 instantaneous references. Those still in doubt can reflect upon the fact that in late September, the US House of Representatives approved a bill dealing with prevention, identification and treatment of concussions in schools. The bill also addresses when injured students can return to their sport. The bill was introduced by two New Jersey Congressman in response to concerns in their home state. In 2008, Ryne Dougherty,  a high school football player, died after returning to football before fully recovering from a concussion. Another New Jersey student-athlete, Niki Popyer, suffered 11 concussions before having to stop playing basketball.
The bill has not yet gone to the US Senate, but officials at the Haldane Central School District are not waiting for federal legislation. A new administrative regulation is about to be adopted that is aimed at increasing awareness of the symptoms of concussions, their treatment and regulations regarding student management after suffering a concussion. The regulation, which has been reviewed by the school physician, nurse, attorney and insurance provider, does not require school board approval.
Trustee Mike Junjulas serves on the Haldane Safety Committee and has been instrumental in heightening awareness of this safety issue.  “I brought up the discussion of Impact Testing at the Safety Committee meeting and the School Board. It’s a computer-based program that several schools, universities and professional sports team use to prevent athletes from playing (too soon) after a concussion.” Impact testing establishes a baseline for healthy brain activity for each student. After a concussion, the test is repeated to help determine when student can safely return to their sport. “For $500 Haldane can get baseline data for 300 student-athletes and up to 90 post-injury tests” Junjulas said. 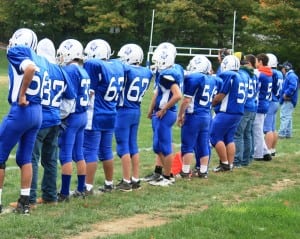 Haldane football players line up before a recent game

Haldane’s Athletic Director Tom Cunningham has seen attitudes about concussions change significantly in recent years.  “Brain injury is major” he said.  “It’s good that awareness is increasing. It’s not that long ago that if a player felt OK, they’d go back in the game.”
“And it’s not just football Cunningham said. “We had one in tennis as well.” While football isn’t the only sport to cause concussions it is the leader among high school athletics. Candy Zgolinski, Haldane’s school nurse, said that five or six Haldane students have suffered concussion this fall – including at least one that was not sports related.
According to Momsteam.com, a website devoted to providing health information to youth-sport parents, concussion rates are increasing in high school sports. The organization says that the current concussion rates per 100,000 player-games or practices are: 47 for football; 36 for girls’ soccer; 22 for boys’ soccer; 21 for girls’ basketball; 18 for wrestling; 10-21 for girls’ lacrosse; 7 for softball; 7 for boys’ basketball; 5 for boys’ and girls’ volleyball and 5 for baseball. In September, USA Today reported that the concussion clinic at Nationwide Children’s Hospital in Ohio estimated that 400,000 concussions occurred among 7.5 million student-athletes who participated in high-school sports in the US during the 2008-2009 school year.
The word concussion is derived from the Latin word “concutere”, meaning to shake violently. A concussion is caused by a bump or blow to the head or by a jolt to the body that causes the head to move rapidly back and forth, causing the brain to collide with the skull. Concussions, also sometimes referred to as a traumatic brain injury, cause temporary loss of normal brain function and can have serious, long-term consequences.
Much of the attention being given to concussions suffered by high school athletes can be attributed to professional football. This past September nwi.com, an Indiana-based online newspaper, reported that “Concussions became a hot topic in 2007, when the New York Times began debunking the NFL by showing that constant head trauma, which football players encounter daily, causes brain damage later in life. In the past three years, all levels of sports have put a greater emphasis on concussions, whether it be preventative measures, how to watch for symptoms or treatment.”
Cunningham strongly recommends that parents, coaches and student take a brief, twenty minute online course entitled “Concussion in Sports – What You Need To Know” offered by The National Federation of State High School Associations at http://www.nfhs.org.