A U.S. Postal Service representative assured residents Tuesday night (Oct. 19) that the USPS plans to keep a post office in Cold Spring after the current lease ends next July and is actively seeking new quarters.
“We’re here to serve this community,” USPS Real Estate Specialist Paul F. Tyburski told members of the Cold Spring Village Board and public at the Village Hall. “The game plan is a one-for-one replacement” although “we’re going to increase it by 33 percent” in size, he said.  The Postal Service is looking for a place within the village perimeter, especially within “the main business district” in the Chestnut Street (Route 9D) and Main Street sector, he said. “And there is no plan to consolidate,” with the Garrison post office, a few miles south on Route 9D, he added. “It’s my understanding that Garrison is going to stay put.” At a Sept. 28 Village Board meeting, County Legislator Vincent Tamagna had raised the possibility of merging Philipstown’s two post offices. Tyburski said that most Postal Service closings or consolidations occur in metropolitan areas, such as New York City, where large but perhaps redundant USPS facilities often exist within five to eight blocks of each other. 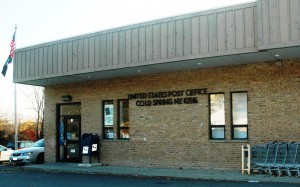 Flanked by shopping carts from its neighbor, Foodtown, the Cold Spring post office needs to find a new home by next July.

Describing himself as “the project manager” for the Cold Spring relocation, Tyburski said that by Monday evening (Oct. 25) he expected to finalize advertisements and begin seeking bids for new space, either in an already-standing building or through construction of a new structure. For a new facility the USPS wants a 10-year commitment, with two options to renew for five years each, he said.
Tyburski admitted the USPS adamancy about remaining in the village took him aback. “To my surprise, the Cold Spring project did get approved, which was my green light to get going” on finding a replacement for the current quarters next to the Foodtown grocery. Also “surprisingly, I’ve had three inquiries so far” about providing space, he said. “So at least I’m optimistic about that.”
Mayor Seth Gallagher said that interest in accommodating the post office had been cited by owners of the Foodtown plaza near the current post office, the open space adjacent to the Nest child-care center, and the former Butterfield Hospital property, all on Chestnut Street.
Tyburski pledged to keep Gallagher and the community informed at each step. For example, once the solicitation of bids closes, he said, he will apprise the mayor of properties under consideration. A Postal Service committee charged with selecting sites and facilities will review the options, narrow the choice, “and we’ll select the site and again notify the community.” He invited public input at every stage. “Anytime is fine. Don’t be afraid to call, don’t be afraid to write.”
The mayor, too, promised to ensure public participation. “We’ll talk about what we think of the options available.  There will certainly be a public meeting to go over this.”
Tyburski estimated that the selection process would take five to seven months before construction commences and then in “another 6 to eight months, your new post office will be here.” He noted that even when the Postal Service opts for space in an existing building the interior must be finished to USPS specifications. He also pointed out that should insufficient time remain for completion of a new facility before an existing post office must move, the USPS can pursue alternatives, such as a temporary extension of its lease on the old space; relocation to a temporary facility, such as an empty storefront; or use of trailers. “That’s something we’re trying to avoid in this case,” he said. “We’re trying to move it along at a rapid pace. I’m not going to waste time. I’m trying to stay on top of this one because of our lease deadline.”
The three trustees present at the meeting, Airinhos Serradas, Charles Hustis, and Bruce Campbell, joined the mayor in expressing relief about the Postal Service plans.  “You can’t think of Cold Spring without thinking of the post office,” Serradas said. “The two go hand in hand.”