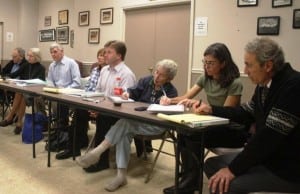 Public comment on the draft Comprehensive Plan for Cold Spring came to an end at 8:25 p.m. on Oct. 21 when the second of two meetings was adjourned. The meetings, held one week apart, were part of a formal public hearing held by the Special Board that drafted the plan intended to answer a fundamental question: “What do we want for the future of our Village?”  The Special Board will meet on Oct. 28 to consider the array of comments it has received both at the hearing and in writing. That review will almost certainly result in at least some modification of the document before the Special Board formally recommends the plan to the Cold Spring Village Board. The public will have at least one more opportunity to comment on the plan before it becomes part of Village law.  Trustees can revise the plan as they see fit but must hold a public hearing before formally adopting it. Once the Comprehensive Plan is adopted, village land use regulations must be brought into conformity with it.
The Oct. 21 meeting was a quiet affair compared to the lively session held a week earlier when fifty residents attended, many of them commenting on details of the plan. Last week only about a dozen residents were on hand and the gathering had the distinct feel of a process that had run its course. Earlier in the Comprehensive Plan process, the Special Board met with several local organizations seeking their input.  Two members of the Cold Spring Boat Club, voiced concerns at last week’s hearing. The boat club property is owned by the Village which leases it to the club. Club member Mark Patinella asked for clarification regarding the plan’s suggestion to “rethink the use of the entire (boat club) property from the river to Market Street.”
While the informal public information meetings held in the weeks before the public hearing involved considerable back and forth discussion, Special Board Chair Mike Armstrong pointed out that the Public Hearing was intended only to take comments from the public. He did respond however, saying that the intent of the plan is to “”¦look at the entire (boat club) parcel”¦as a resource for the village.” The plan suggests that increased community access to the club property and its facilities be considered, possibly including renting the building to community residents and organizations for special events.
Roger Chirico, another boat club member, asked for specifics about how the boat club could generate revenue for the village as suggested in the plan. Armstrong again said, “We can’t really go there” but commented that the plan has three objectives regarding the boat club: to protect and enhance it for its members; to increase benefits to residents and to generate revenue for the village. When Chirico persisted, asking for details about boat club revenue, former cold Spring Mayor Anthony Phillips, now a member of the Special Board, joined in the discussion, agreeing with Chirico. “I have to be honest. I have problems with this too. There are too many variables. We don’t have answers – and that’s part of the problem with the plan.”
Anne Imperllizzeri, Vice Chair of the Special Board commented that the most important words in that section of the plan are that the village will “work with the boat club. No one is telling the boat club what to do” she said. Special Board member Michael Reisman, addressing Chrico’s concerns, said “I’m troubled that you are troubled Roger. It’s important to understand that some items are very specific – such as water quality” while others are less detailed. Regarding the boat club Reisman said “There is no consensus yet. What is called for is continued engagement. Is the boat club going to be squeezed out? The answer is no.”
Michael Bowman spoke on behalf of the Cold Spring Fire Company. The Comprehensive Plan suggests that the former Butterfield Hospital be considered as the location for a new fire house. “There is a need for a new fire house” Bowman said. “We identified Butterfield as one of the sites. But we’re not opposed to staying on Main Street.” Bowman also said that the service award plan is important to the Fire Company membership and is a significant factor in the company’s ability to retain its volunteer members.
Moving both the fire station and village hall from Main Street to the Butterfield site has been mentioned many times during the planning process. Stephanie Hawkins has attended many of the Comprehensive Plan meetings and repeated an often asked question. “I wonder what the effect will be if all of the important meetings take place outside the village center?” Some have expressed concern over removing all “real” village functions from Main Street.
Jan Thatcher, a former member of the Special Board, was the last resident to speak at the hearing. Thatcher said that he felt there are “inconsistencies and contradictions” in the draft plan and questioned if people have been given enough time to analyze its contents. “It’s huge amount of information to decipher and clearly there are some mistakes.” He also questioned what would happen if, once the plan is  in the hands of the Village Board, mistakes are not corrected. Armstrong responded that the Village Board “is a wonderful venue” to deal with such questions. Reisman said he hoped Thatcher would have “put some meat on the bone” by submitting specific concerns in writing and characterized Thatcher’s general concerns as “unfair.” Thatcher said he would have produced more detailed comments had he been given more time.