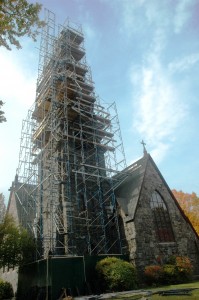 Wrapped in scaffolding, the tower at St. Mary

The toll of age and Hudson Valley weather stopped the tolling of the bell at the Episcopal Church of St. Mary in the Highlands several years ago. Now the 1,100-pound bell is destined to get its voice back, thanks to a $215,000 project to restore the exterior of the steeple that houses it.
Towering over Cold Spring since 1868, the 128-foot granite steeple is the focus of work expected to take three months. According to church officials, the mortar of the steeple exterior will be fully raked and pointed. To ensure restoration of the historical essence of the structure, the original mortar was assayed and duplicated. In addition, the steeple’s windows and louvers are being fixed and repainted. The project will physically secure the structure and restore it to its original state.
“I can’t wait to hear the bell tolling proudly once again,” Father Shane Scott-Hamblen, St. Mary’s rector, said when the parish announced as the work got underway. “Everyone has worked so hard to raise the funds for this first phase of the project. I’m excited and pleased”¦” As he explained to the congregation at the end of Sunday Mass on Oct. 17, “we could not wait until spring for fear the ice could shift some of the stones rather than just the mortar and that would make it a much more expensive job.”
To support the work, one phase of an overall remediation, the parish raised more than $200,000, holding fund-raisers, pursuing grants, getting pledges, and enlisting the help of the local community. To date, St. Mary’s has received donations from all corners of Cold Spring and Philipstown. With the assistance of State Sen. Vincent Leibell, St. Mary’s obtained $20,000 from the State of New York. The Episcopal Diocese of New York provided $68,000, the New York State Landmark Conservancy supplied a $25,000 grant, with another $7,500 in grant funds from the New York State Landmark Conservancy Consultants program.
Ed Kamper Restorations, an award-winning architectural firm, is supervising the steeple project, with work carried out by Henry Restorations Ltd., based on Long Island. The interior of the church itself remains unaffected by the activity, with Sunday liturgies, weddings and other events continuing. Upon completion of the exterior work, the church will be only part-way toward its goal. To restore the steeple interior and ground-floor sacristy, St. Mary’s will need approximately $235,000 more. Thus the fund-raising will continue. (Donations can be made to St. Mary’s in the Highlands Steeple Fund, 1 Chestnut St., Cold Spring, N.Y. 10516.)
Concerns about the steeple are not new. In October 1899, the parish vestry, or church council, took up the “matter of repairing the painting and flashing around the steeple,” forming a committee to investigate the situation. The upshot is not clear, but in October 1903 the vestry convened a special meeting “for the purpose of considering the condition of the church spire and repairs necessary.”
The church was built on land donated by Robert Parrott, longtime executive at the West Point Foundry, with financial help from other illustrious 19th-century residents, among them Gouverneur Kemble. An entrepreneur who established the West Point Foundry and earned the nickname “founder” or “father of Cold Spring, Kemble also served in the U.S. House of Representatives. Other prominent parishioners have included philanthropist Julia James Butterfield and her second spouse, Gen. Daniel Butterfield, a Civil War veteran, and architect George Harney, who designed the church.