Cold Spring’s aging water system already warrants attention thanks to its old pipes, low-pressure constraints, and dams due for repairs. Now comes another infrastructure-related concern:  Soon-to-be obsolete household water meters.
The metering issue dominated the Cold Spring Village Board meeting on Tuesday night (Oct. 26). Joined by Water Department Superintendent Greg Phillips, Village Clerk Mary Saari and Tom Sprague, a sales agent with Schmidt’s Wholesale Inc., the board began working through the village’s options. Sprague’s company represents Badger Meter Inc., of Milwaukee, which provided the village’s existing metering units, installed in 1997. “They’re going to discontinue the manufacture of them” within 12 months, Sprague said.
To help municipalities switch from the present equipment, whose design dates from 1958, Badger is offering discounts on recommended replacements. As part of the deal, a meter component, technically called a “data profile transmitter,” which normally costs $155 would be available at $115. However, a fact sheet from the company cautioned that the discounts only apply until the end of this year. Badger would supply 30 data transmitters as part of the deal, but with about 890 meters and customers, Cold Spring would still be required to pay for 860 — a cost of $98,900. Related equipment, essentially software and a hand-held, automatic meter-reading device that allows technicians to get information from a distance, would cost another $10,500. Thus the total price of a new metering package would be about $110,000. 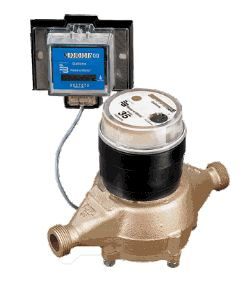 According to Sprague and Badger promotional materials, the proposed system allows meters to be read from the street or up to 1,000 feet away, records a near-continuous output of data, can detect such aberrations as a constantly flowing toilet or shutdown, and reduces the number of hours water department staff must devote to meter reading and similar chores. After one on-site visit per house or building to install the new unit and a few programming changes at the village end, “you’re up and running,” Sprague said.
Water Superintendent Phillips noted the advantages of the proposed changes as well as other potential courses of action, such as buying up as many components of the current system as possible, to allow the village to make replacements as those meters fail. “That may gain a certain amount of time,” he said.
“The old ones we have now are good until they break?” Mayor Seth Gallagher wondered. Phillips answered in the affirmative. Sprague added a caveat: “A water meter will never go fast” and fail all at once, he said. “It’ll under-register” instead and impair overall management of water usage. The proposed new system increases the ability to readily discover a leak or other malfunction, Phillips observed. “You could literally find that out ahead of time. You can get ahead of a lot of the problems.”
“If you’ve got a leak, it can really help you out,” Sprague agreed.
Trustee J. Ralph Falloon saw benefits for homeowners and recalled an incident where an empty new house suffered a serious leak. “You could save them a ton of money,” he said.
“There are certainly residents, I think, who could appreciate this,” Village Clerk Saari concurred, mentioning one case that involved “hundreds of dollars.”
Falloon suggested another way to generate savings from the proposed system: Installing the technician’s reading device in a garbage truck so the village could “pick up garbage and read all the meters at one shot!”