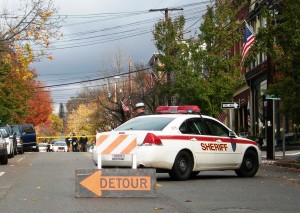 The Civil War blasted back into Cold Spring on Friday afternoon when police closed a portion of Main Street after two men brought a Civil War cannonball into the village, seeking advice on dealing with it. A bomb squad from Westchester County detonated the cannonball in Mayor’s Park about 3:13 p.m., approximately two hours after the incident interrupted lunches and emptied buildings.

According to accounts from village staff members and others caught up in the drama, a man named Bob purchased the cannonball, also described as a shell, and took it home, where he tinkered with it and noticed it still contained powder. He and a friend, identified by village staff and residents as Andrew Dade, of Cold Spring, then drove the cannonball into the village and parked in front of Le Bouchon restaurant, leaving the cannonball in the vehicle while they consulted the Cold Spring Police Department. They wanted to know “what the procedure is, what to do with it,” said Ann Bouchard, village clerical assistant, who was working in the office, downstairs from the police department, in the Village Hall located at 85 Main Street. 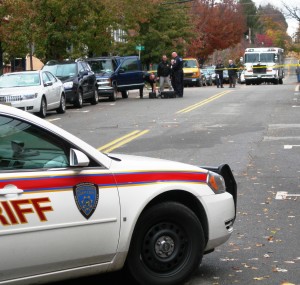 Police remove the cannonball from a vehicle.

Upon learning of the cannonball and assuming it still might be dangerous, the police officer on duty, Rhonda Wallach, immediately ordered the evacuation of buildings in the vicinity and set in motion an official response that involved village police, the Putnam County Sheriff’s Department, Metro—North police, the Westchester County Police Special Operations Division Hazardous Devices Unit, and Cold Spring Fire Company members. Officer Wallach thought it best to clear the buildings, “because if it did go off, it could take out the block,” Bouchard said of the cannonball. She said village personnel helped tell those in other establishments to leave the premises immediately.

Shortly after 1 p.m., Main Street was closed to vehicles and pedestrians from Number 105, several buildings east of the Village Hall, to Fair Street and Rock Street. Drivers who had parked cars in the blocked-off area earlier in the day were unable to retrieve them. The Sheriff’s Department kept traffic out, yellow tape held back pedestrians, and passers-by, shopkeepers, and residents milled on the sidewalks beneath glowering skies intermittently brightened by streaks of sunshine. Trustee J. Ralph Falloon, a member of the Cold Spring Fire Company, assisted in the safety efforts as everyone waited for the bomb — or cannonball —- disposal squad.

“I had a table in there,” beginning lunch, Michael Vierra, the headwaiter-manager at Le Bouchon said. “They were two elderly ladies, on their first course,” when Officer Wallach told them to leave.  “She had the road closed off and everyone evacuated in five minutes. It was pretty impressive,” Vierra said. “I think she did the right thing. It’s better safe than sorry.”

Some onlookers gave Bob and his friend credit for doing the right thing and getting the police involved once it appeared the cannonball might not be safe. Standing on the sidewalk, Bob, owner of the cannonball, refused to speak to the press. “I’m not saying anything!” he told Philipstown.info vehemently. His friend, Andrew Dade, also announced “I’m not making any statements!” But later Dade did say that he did not know exactly what type of Civil War cannonball or shell was involved.

Two visitors from Brooklyn, Ben Fitzpatrick and his sister, Hannah, were among those blocked from returning to their car. “Who knew Brooklyn was safer than Cold Spring?” Ben joked. 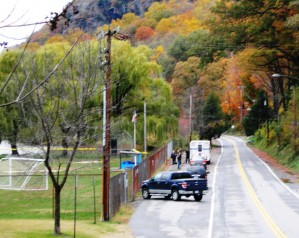 Around 2:12 p.m., the Westchester County Hazardous Devices Unit squad arrived in their long white van with red and blue trim, called in because Putnam County does not have a bomb-disposal team. Mayor Seth Gallagher rode up on his bicycle about the same time, and Cold Spring Building Inspector Bill Bujarski, who also serves as a village police officer, pulled up in his car. In time, the cannonball was loaded into the Westchester van and driven to Mayor’s Park to detonate. The van stopped by the fence on Fair Street and two team members carried a box into the park, pausing under willow trees at the far end.

With other officers, Falloon watched from outside the park and regulated traffic as needed. He explained that the Westchester team dug a hole, inserted the cannonball, wired it, and left it, preparing to detonate it from their truck, synchronizing the time with Metro-North so as not to disrupt trains. A northbound train sped by around 2:55, and the waiting went on. Then Falloon and others blocked off Fair Street. A southbound train passed about 3:09 p.m., followed by another a minute later. At 3:13 p.m. a tremendous boom sounded from the park, followed by a softer repercussion. Nearly 150 years after the Civil War, the cannonball finally went off.