Story and Photos by Alison Rooney

The scenario begins with a compelling image, then a “cut to” followed by a montage, all before the first line of dialogue is spoken by the young protagonist.  It is an apocalyptic vision; the Coliseum in Rome destroyed, the Eiffel Tower split in two.  The setting is not the future, but “a more severe version of today.”  A strange voice, which could be the protagonist’s mind, speaks out.  Could this voice be the antagonist? “No,” replies the author of this scenario, “the environment is the antagonist.”

The author explaining and defending her story and character choices is twelve-year-old Isabella, who was participating in “Screen Warriors,” a screenwriting class conducted by Kara Raynaud, of Garrison, at the Howland Center in Beacon. Each of the four middle-school-aged participants present at this past week’s session took a turn handing out re-written drafts of the opening pages of her screenplay, and assigning roles to those assembled round the table. After the new work was read, a discussion ensued, with constructive comments from all present, and questions and suggestions from Raynaud. 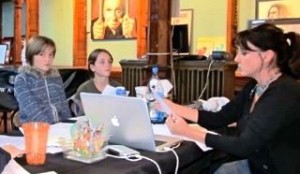 Kara Raynaud (r) and participants in the screenwriting class

This 11-week program began with acting classes and character work during the first three sessions.  The budding screenwriters worked on monologues and character building through acting, designed to serve them later, as writers.  Once they began their screenplays, the focus became editing, making decisions about character and action, with a goal of producing a “spec script” ready to be performed by local actors, friends and colleagues at a ‘Red Carpet’ event at the end of the sessions.

The screenplay subject matter at this session varied from rivalry and retribution as reflected through the prism of baseball, via Juliette; to a more menacing showdown, with young adult characters, from Marina; to a yin and yang love/hate big sister, little sister relationship from the youngest writer in the group, Ellery. Throughout, Raynaud urged the writers to refer back to the bios they had created for their characters, and to continue to flesh them out.  Calling “the first 10 pages the most important,” Raynaud stressed structure.  Noting that many first-time screenwriters fall into the trap of too much exposition, she advised that “instead of characters talking about what thing they are going to do, they should do it.  Talking about what they are going to do is typical of the first draft.”

As the screenplays were being read, Raynaud instructed the authors to take notes on how they felt it was being enacted—”be analytical.”  She encouraged making “crazy choices.  Don’t make the usual, simple choices. You can change them later—go out on the edge.”  Each conflict and/or plot development needed to be deemed “justifiable,” and Raynaud suggested creating “circumstances which push your protagonist forward.”

Questions asked post-reading included “Did you see this material as [more suited for] television or film?” to which, in referring to Juliette’s piece, Marina replied “it seemed structured like television,” while Isabella added “If it was a television show, I would never miss one episode.” Constructive critiques and support were the order of the day.

Raynaud entered into a dialogue with Ellery about a plot development, suggesting an alternative, which was met with “I don’t think I’m going to go that way.”  The kids seemed to relish being in control of the destiny of their scenarios, perhaps enjoying the freedom of choice not always possible in school.  Witness this dialogue:

Raynaud: “Make it more cinematic, big choices.  This is great, believable, but a film script needs dramatic tension.  How can you do that?”

Ellery: “I’m not sure because I don’t want the running away to be the main event.”

Raynaud: “I think you’re back-pedaling and meandering.  I think the getting lost will add tension.”

Ellery: “Still, I want something else to be the main event.”

This kind of independent thinking is solicited in the class, and Raynaud has no problem with participants disagreeing with her.  “I’ve learned how much I love working with them.  I’m so glad this has come to fruition.  They’re so creative–they say whatever is on their mind, they take risks and chances.  It’s inspiring to be around.  When I was young I used to get the red pencil.  All the emphasis was editing, grammar and sentence structure.  Any time I tried to be creative, the red pencil came out.  In this class there is no editing.  It’s about being honest.”

The difficulties involved in the artistic process were acknowledged, with Isabella describing hers: “This scene was such a big hump.  I was getting frustrated.  I needed to calm down, and then I got it.  I kind of wrote it down.  I let it sit there for the night.  Then I edited it.”  Speaking in general terms, Raynaud offered this wisdom: “Sometimes we come up with the concept, then we hit a trouble spot and we get insecure about it.  But if you stay with it — and go back to your bios — it winds up working.”  Marina attacked her script in a different way, “I actually cut out a lot of characters when editing.  And I made my first scene a monologue.”  Marina was still mulling over her characters. When asked, “Is George evil?” she replied, “I don’t know yet.” 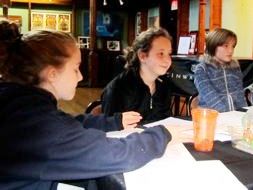 Raynaud, who moved to Garrison from New York City last year, is a 20-year veteran of the film and television industries.  She has worked as a make-up artist, and, for the past 9 years, as a screenwriter.  Last year she directed a short film, Queen of Greenwich Village starring Anne Meara and Carole Shelley.  She is affiliated with the Black Nexxus Studio in New York City.  In her words, “I write every day.” She hopes to offer more such workshops, for those from 5th grade on up through high school, at local schools and regional libraries.

For more information on the workshops, contact [email protected]