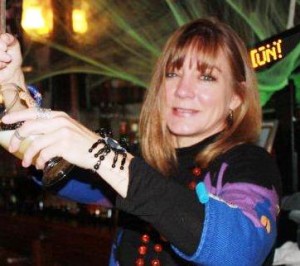 Allison McIntyre has roots in Cold Spring — past and present.  Her dad, Dan McIntyre, was born and raised in Philipstown and attended Haldane along with his six siblings. Allison was born at Butterfield Hospital and currently works at McGuire’s on Main. These days it does not take much coaxing from customers to get her talking about her recent trip to Africa. Accompanied by her mom and dad and her sister and her sister’s fiance, McIntyre spent three days in Rwanda and eight days in Kenya. The trip took place during Africa’s Great Migration — an amazing movement of wild animals that occurs each year from late August through October. This was no hunting expedition. The only shots taken were from cameras. Allison came home with 350 pictures — a few of which appear below. Also below, in quotes, are some select entries from her journal.

Going to Africa is not like jumping in the car and heading to Great Adventure. McIntyre and company didn’t have just the 13-hour flight from Boston to Nairobi, Kenya — a distance of some 7,192 miles — to endure. There was also the matter of altitude. The Cold Spring post office lies 112 feet above sea level. The hike that Allison and her family would take up to Silverback Gorilla habitat was an hour- and-a-half climb ending at 9,000 feet. Thin air. To prepare, McIntyre spent about six months walking, not just on the flats but up and down the stairs of her apartment building. Special clothing suited to the conditions and climate and “lots of shots” — for typhus, malaria, hepatitis and more — and she was ready to go. 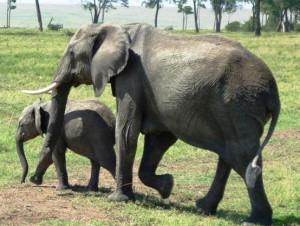 Never wear white near an elephant!

First stop was Nairobi. With a population of more than 2 million, it is the 13th largest city in Africa. McIntyre was impressed by the amount of construction taking place — in stark contrast to the extensive tin cities she saw as her plane landed.  She was also taken by the city’s diversity — in

Never wear white near an elephant!

everything from its architecture to its residents. And it is Africa. Nairobi is home to a National Reserve — established in part to allow those who can’t get out of the city to experience the country’s amazing wildlife.

“We went to the Sheldrick Sanctuary today in Nairobi.  It’s home to baby and young elephants and rhinos that have been orphaned because their mothers were poached for tusks and horns.  None of the young are weaned yet and their handlers are fantastic, attentive, and live in the stalls with them.  Africa has a healthy approach to the poaching, in my eyes.  You get caught in the act and you are shot on site.  If they catch you later, you are imprisoned, sometimes for life and your wealth is taken away.  Considering that the bodies of the animals are laid waste, compared to a very small recovery, and the offspring left to die even if they are endangered, the price to pay seems reasonable to me.”

McIntyre’s hikes up and down her apartment’s stairwells paid off as she had no trouble with the one- and-a-half-hour trek which took them up 1,000 feet to the lower reaches of Silverback Gorilla habitat. Had weather conditions been bad, and without advance conditioning, the hike could have taken much longer. The gorillas live on the side of a large volcano at elevations of 9,000 to 15,000 feet. They are used to having visitors, though excursions are carefully controlled. The primate families only have to endure human guests for an hour a day.  The family McIntyre’s group visited had 22 members — including the dominate male, a mature Silverback named “Ubumwe” and the younger, 8-year-old “Bushokoro,” who weighed in at 350 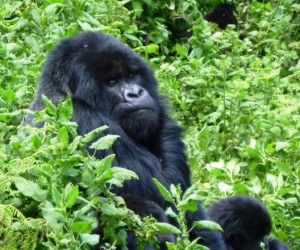 pounds. When the group arrived, the guides and trackers had to rouse the gorillas from a group nap.  McIntyre said that gorillas are known to get drunk on bamboo shoots, and there’s nothing like a good snooze to aid recovery. If that behavior sounds familiar it may be because gorillas are 99.4 percent the same as humans in their genetic makeup. Bushokoro took a liking to Allison’s dad as the visitors quietly walked through the thick vegetation. The gorilla gently took Dan’s hand and carefully checked out his scent before moving on.

From Allison’s African Journal; — Sept. 28, 2010:
“The silverback, Ubumwe, all 480 pounds of him, came walking up the hill right to me.  Francis told me to, ‘Stay where you are.  You’re fine.  Put your camera down.’“ Ubumwe came within a foot of me and walked around, watching me as he passed.  Majestic in stature but still huge and overwhelming in my mind.”

Gracious people
McIntyre has high praise for the guides, trackers and porters who took care of her and her family. Many were Masai. While their tribal tradition has included arranged marriages and multiple wives, that seems to be changing.  Only one man, William, maintained the steadfast belief of multiple wives. He has three wives and seven children. McIntyre said no pressure is put on 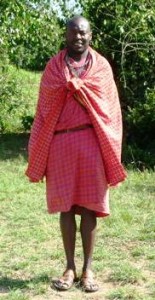 John is a Guide but is known as “Teacher”

younger men to follow that tradition. Circumcision of both men and women is still practiced. McIntyre uses the word “gracious” a great deal in describing the Kenyan people. In her mind perhaps no one epitomized that better than their guide, John Kaelo.

From Allison’s African Journal — Oct. 2, 2010:
“I spent more time talking with John at breakfast today.  He is such a gracious man.  Although a fantastic guide, he went to university and holds a teaching certificate.  At least one of the younger guides had John as a 6th-grade teacher.  Out of respect, the camp staff refers to John as just that, Teacher.  John is married and has three children.  He is very proud of his family.  As he should be.”

Kaelo’s children speak English, Masai and Swahili and four other tribal languages. He wants them to also learn Spanish.

Magnificent creatures
While McIntyre’s group got to experience the gorillas up close, personal and on foot, encounters with Africa’s other wildlife species, while close, were strictly limited to views from within the relatively safe confines of a Land Rover. One day they saw two kills — both before eight in the morning. Two 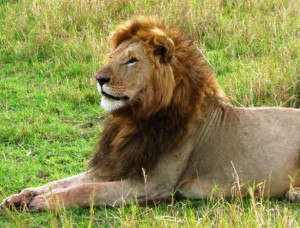 young male lions took down a zebra. Some 700,000 zebras migrate each year out of a total population of 2 million. Nearby three cheetah brothers killed two wildebeests.  “The cheetahs were very wary of the lions,” McIntyre said. Cheetahs are considered to be the bottom of the cat chain.  That was probably of little consolation when a flat tire had to be changed on the Rover — close to the cheetahs. Luckily the cheetahs had just eaten.

From Allison’s African Journal — Oct. 3, 2010:
“We just passed two of the five lion boys after a zebra kill and ahead of us is a tremendous herd of wildebeest and they are being hunted by the three cheetah brothers.  The ‘beests have split in two groups, are running in opposite directions, and the brothers have picked their kills.  I’ve never seen anything move that fast!  A brother took down one ‘beest and the other two took down another.  It was only seconds.”

Animal sightings were abundant and made a definite impression on McIntyre. “Hippos are just vicious animals,” she said. But giraffes were “goofy and fun to watch” as their legs flailed about after being startled. Of the 22-foot crocodiles, McIntyre said, “I’ve never seen anything move that fast.”  They made a point of not getting too close to the massive rhinos — they can run at speeds of 40 miles per hour and maintain it — about the same speed 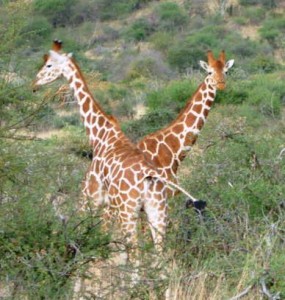 Giraffe’s- goofy but fun to watch

that the Rover could muster over the rough terrain. Elephants were seen only 50 to 60 feet away. McIntyre said no one is allowed to wear white clothing within sight of the elephants. “It’s like waving a red cape in front of a bull,” she said.  One group was charged by an elephant, a close-up sighting McIntyre was happy not to experience. Warthogs on the other hand “are the funniest things ever,” she said.

Things that go bump in the night
The camp in Rekero where McIntyre’s group stayed was located within 50 feet of a river. It is quite common for animals to simply walk right through the camp at night. “You could hear hippos and hyenas. There were wildebeests, and giraffes and elephants,” she said. A leopard named “Olive” is a common sighting near the camp. During another group’s stay there a lion was found in the kitchen.  It was the only place where McIntyre encountered fear.

From Allison’s African Journal — Oct 1, 2010:
“Last night was the first time I felt any fear at all.  Woke up about 1 a.m., the first time, to something pushing up against the side of my tent and the headboard of my bed.  It was big and chewing.  You could hear tearing on grass, then heavy breath and munching.  It moved on fairly quickly, but then the hyenas started to cry.  If I knew I was afraid, then so did they.” 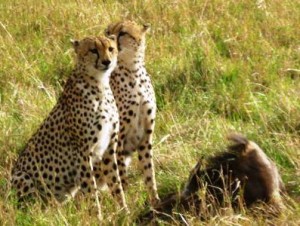 Two Of the Cheetah Brothers

McIntyre said that she befriended a woman named Natasha who was working with a Disney film crew who were just finishing shooting for a wildlife documentary. It will star many of the same animals that she saw — including the brother cheetahs, the lions who brought down the zebra and Olive the leopard.

There IS such a thing as a bad question!
Allison’s trip was amazing by any standard — from incredible wildlife and rich, unfamiliar cultures to gracious people and volcanic landscapes. And while most people she talks to about it, after that ever-so- slight coaxing, are completely enthralled, – there may be one small segment of the population that she just doesn’t understand: The people who listen to her story and say, “Yeah “¦ but why would you want to go to Africa?”