“Cross-your-heart and hope to survive” might be the motto of pedestrians attempting to use crosswalks on Route 9D in Cold Spring, according to comments at last Tuesday’s Village Board meeting. Residents and board members alike described the danger of trying to cross Chestnut Street at the crosswalk at Benedict Road, at the edge of the Foodtown parking lot. Appeals for a new crosswalk, at Main Street at Academy Street, also were heard.
Mayor Seth Gallagher recommended that the board hold a workshop session devoted to the crosswalks issue, which consumed much of the audience-participation period at the regular monthly meeting, Nov. 9. Ideas informally floated during the discussion included a collection to raise private money for enhanced signage, installation of in-the-street “penguins” or caution bollards, traffic-control cameras, reconfiguration of the Benedict-Chestnut connection to better deal with the heavy truck traffic around Foodtown; placement of rumble strips in the street, painting of warnings on the pavement, narrower shoulders or curb bulb-outs, and better enforcement of the law. 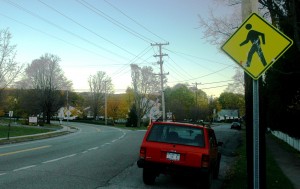 A pedestrian crossing sign stands well in advance of a second crosswalk on Chestnut Street-Route 9D.

James Hartford, a resident and local architect who takes his children by stroller to the Nest child-care center, on Chestnut Street, described the “consistent” problems of using the crosswalk there. “I am constantly being — `harassed’ is a nice word for it, trying to cross the street, with motorists who refuse to stop. I’ve had instances where I’m halfway across and I’ve had cars still coming at me,” he said. Recently,  he said, his family was half-way across Chestnut and a car had stopped for them, but another vehicle in the other lane refused to stop, only to pull into the convenience store parking lot mere yards away. He said that when he complained, he got an obscene gesture from the driver, a “local guy. Lots of local people’re doing it. It is really a problem. Please do something about it,” he said. If nothing is done, he said, the village should consider removing the crosswalk, because it is so ineffectual and conditions are so unsafe.
“The same thing happens to me, too,” Gallagher said. He cited an incident in which he was “going to the Farmers Market, with my kids,” walking bicycles, and unable to cross because cars refused to respect the crosswalk.  “What can a pedestrian do? You can’t cause a car to stop. They can still hit you, and you might be right” in a legal sense, but helpless.
Audience and board members also noted problems at another crosswalk, on Morris Avenue near the entrance to the Haldane Central School campus. William Bujarski, village building inspector and police officer, said that New York State law demands that cars stop when the pedestrian is in the same lane as the car, or is stepping into it. “However, as you approach, they’re supposed to be stopping for you; they’re supposed to yield to the pedestrian. The problem is catching somebody” when a violation occurs, he said.

“I think we have to have more of a police presence up there,” the mayor proposed, promising to confer with the police department. “Give some tickets out and that’ll start to warn people.”
Bujarski observed that “the village is informally known as a speed trap,” though as village justice court rolls attest, plenty of drivers continue to speed. “It’s bad behavior on the part of drivers. There has to be consequences” easily understood by drivers, he said. “Notably, you’ll probably find that a good part of the population here is probably some of the violators.”
Thomas Ambrose, a resident, urged that a crosswalk be installed on Main Street at Academy Street, to accommodate families and children walking to Haldane from the Paulding and Cherry Street neighborhood. “It’s a little bit dangerous, only because people [in cars] at the 301-Main Street and Route 9D intersection kind of feel it’s ‘up the hill and away they go,'” Ambrose said.
Trustee Airinhos Serradas recalled that he had raised the issue of hazards at the Academy Street-Main Street intersection in the past. “I know it’s taking a lot of time,” he said. “It’s unfortunate. Hopefully we’re getting much close to getting it resolved.”
Trustee Bruce Campbell, who has contacted the New York State

The crosswalk on Chestnut Street at Benedict Road.

Department of Transportation about a number of problems in the village, said that the possibility of a Main-at-Academy crosswalk fell victim to state budget constraints, complicated by departure of key DOT staff in employee buy-outs. “I know it was in the plans to really look at that,” he said. “I don’t think they did anything that was a very thorough investigation. It’s something I definitely have on my calendar so we don’t forget about it.”
Village options regarding Main Street, Route 301, and Chestnut Street -Morris Avenue, Route 9D, are limited because they are state roads. The mayor said the village should engage in dialogue and “figure out what we want to do there,” on 9D and beyond. “Do we want crosswalks in these areas? What would work? What would be effective? We really need to come up with a plan.”

On other infrastructure matters, Mayor Gallagher reported sidewalk repairs continue in neighborhoods throughout the village, with some of the work being handled by a contractor and other, smaller projects undertaken by the village highway department. Campbell said that the bandstand at the waterfront got some repairs, too, with the assistance of the Putnam County Sheriff’s Department Inmate Community Work Program. The program brings in crews, made up of occupants of the county jail, to help towns with work projects. For Cold Spring, they undertook some carpentry and sanding and painting at the bandstand, Campbell said. “They did a pretty nice job.”
On the financial front, Village Accountant Ellen Mageean told the board that the village had received $8,721, part of the yearly payment from Cablevision for the cable franchise. The village expects to receive $32,000 to $34,000 in total for the fiscal year, she said. The mayor reported that thanks to the new office system, making it easier to track unpaid traffic tickets, the October Justice Court intake totaled $15,519. “I think this is the most money ever brought in, in one month,” he said.
Trustee J. Ralph Falloon, a firefighter on a pilot panel set up by the Town Board to study consolidation of emergency services in Philipstown, announced a public meeting to be held on Monday, Nov. 15, to consider legal questions related to a possible consolidation. The meeting is scheduled for 7 p.m. at the Town Hall, 238 Main St., Cold Spring.

One thought on “Crosswalk Dangers Discussed by Public, Village Board”