Library volunteers.  The term conjures up an image of  bespectacled book lovers, peacefully shelving volumes, enjoying the time of day.  That image was dashed at The Butterfield Library’s Autumn Reception, as a number of past board members were honored with the first annual Badey & Watson/Mary Rice Volunteer Service Awards. These awards were named in honor of the many hours of volunteer work contributed by Glenn Watson and Mary Rice in creating the now much-used Reading Garden.
Wine and refreshments and a silent auction amidst the books made for a convivial atmosphere. An entertaining video put together for the occasion delved into each of the former trustees and what specifically they contributed during their tenure.  It quickly became obvious that the growth of Butterfield could not have been accomplished without the very real good old-fashioned hard work of these volunteers.
This year marks the 85th anniversary of the Library’s opening.  Board of Trustees President Judy Meyer, who was the Chairperson of last Saturday’s proceedings, was very upbeat about what has been going on at the Library in recent years, saying “the Library is growing by leaps and bounds, every year now.  We have been offering more programs, are open longer hours, and the Library truly has become a community center.  In fact, many of the programs are full; we have to cut them off and turn people away because they’re so popular. We hate disappointing people, and putting them on waiting lists, but The Library is too small—we’d like to expand.” 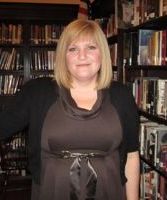 Meyer praised Library Director Gillian Thorpe, who created the video shown. “Our director is simply the best.  She has done a wonderful job of keeping the Library current.  She’s made it a welcoming place with staff members who’ll do anything for you.  This place is amazing! Our staff is amazing! The people in the community are very supportive of us.  We’re here for them.”
Invoking the not-so-distant past, Meyer said “We spent over $100,000 on this building about ten years ago and it has changed the atmosphere of the whole building.  And now the Reading Garden is part of it all.” In opening remarks, which preceded the showing of the video, Meyer noted that two of the former board members, Alice Schatzle and Ray Champlin, had, between them, 49 years of service.  The video introduced each retired trustee separately, and former library directors, amongst them Phyllis Keaton and Karen Shea, along with Thorpe and Meyer, told anecdotes about each, detailing, with humor, the specific accomplishments of each individual.
Alice Schatzle served 22 years, including some as president.  Schatzle was described as caring, concerned.  She took on the handicapped ramp, a large project, more involved than originally envisioned.  She helped create the children’s room, in part by removing cobwebs and coal. 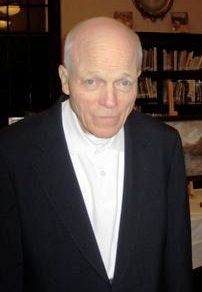 Ray Champlin, with 27 years of service, began as treasurer when there were no computers and  everything was done by hand.  Champlin’s persistence was described in the video: “as a math teacher, every error bugged him, and he had to find what was missing.”  He did more than just crunch numbers, as well, and had a hand in salting and sanding each year.  Karen Shea (with a twinkle in her eye) said that “when money was tight, Ray would say ‘don’t buy any books this year.'”
Julie Russell
was noted as “someone who used the Library a great deal.  So we asked her to help.  And boy did she.  She was a ball of energy.  Julie wore a ton of hats.  She painted the children’s room, cleaned out and threw away a lot of stuff to create the children’s room.”
Mike Riner was honored as a “jack of all trades: finance “¦ construction.”  A description was made of an ingenious system he designed to bring multiple boxes of books up from the basement through rigging up a vehicle and equipment.
Joe Curto’s volunteer tenure was briefer than most, as he returned to an open spot on the Haldane School Board, but in his short time on the board he made an impact: “He always said, ‘if you need me, give me a call’ or ‘I know someone — I’ll give them a call’ —and he meant it, and he did. He was instrumental in establishing financial procedures.  He asked so many great questions.  He had a great business sense.”
Candy Zgolinski was described as having “joined the board at challenging time.  She has a calmness, and an ability to look at things from all sides.”  Zgolinski was instrumental in bringing a defibrillator to the Library and in training the staff how to use it.  Although she is no longer on the board, she still volunteers frequently. All of the honorees received plaques and also Certificates of Merit for volunteerism from Assemblywoman Sandy Galef, who attended. 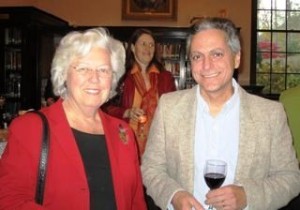 Current board members were on hand for the festivities. Scott Anderson joined the Board recently, citing, as the main reason, “my family has always used the Library.  I have an 11-year-old and a 7-year-old.”  A lawyer working in New York City, he and his wife, who teaches at Haldane, have lived in Cold Spring for about ten years.  Speaking of his goals as a trustee, Anderson said, “We try to think of the best ways to improve the Library.  We want to offer something for everyone.  Some want classes, some want books.  We have books available from all over the Hudson Valley.  It looks like a small library, but what you can access here is amazing.”
Another trustee, Mike LaRocco, who works in finance and accounting, had similar reasons for signing on: “Our family loves the Library.  My eleven-year-old, Allie, comes after school to study with friends or take a writing class.  It’s a warm, homey place to come to.  What the Library has to offer covers the whole gamut of the community, from ‘Bouncing Babies’ to computer training for seniors.” 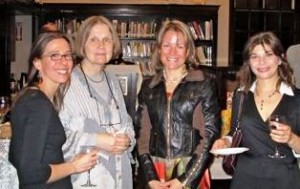 Speaking of the walkways construction now going on in front and alongside of the Library, Gillian Thorpe compared and contrasted the past and the future: “they were in terrible condition because they were done wrong the first time.  This time we pulled together a facilities committee; they know what they’re talking about.  We had a bidding process.  Going forward, we will be continuing our walkway campaign.  We’re not using tax monies for this purpose.  We choose to use our endowment for maintenance. I look forward to another 85 years.”
For more information on the Library and its programs, visit http://www.butterfieldlibrary.org/ or call 845-265-3040.