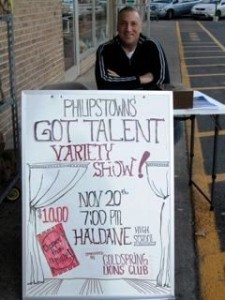 Story and photo by Alison Rooney

In keeping with its much-loved tradition, the Haldane Variety Show returns this weekend, and extending its reach to all community members through the Lion’s Club, which is sponsoring the evening.  The Show will benefit the Lion’s Club Scholarship Fund, with all proceeds going to support local students. The show, which begins at 7 p.m. in the school’s auditorium, features a line-up of talent of all ages—not just students—and includes a great sampling of the many performing arts professionals who choose to live in Philipstown and nearby.
Lion’s Club member and longtime resident Melissa Carlton says that the Haldane Variety Shows “have always been successful. In fact there was a lot of competition for the slots and that’s why they stopped doing them. [Editor’s Note: Haldane brought back the High School Talent Show last year and it was a great success].  This is an opportunity to put all of the local talent upfront, and it’s an inexpensive way to do a fundraiser in these difficult times.”  With a ticket price of $10, the tag line for the flyer is “cheaper than a movie.”
The Lions and Haldane are cooperating on the evening, and the Haldane Leos, the student offshoot of the Lions, will be helping to organize things and will be manning the refreshment table.  All monies raised by the Leos will go towards their specific charitable endeavors.  The Leos, who are involved in many community activities, have seen a large spike in their student membership this year, with over 30 students involved. Donna Tiffany is the Lion Club’s liaison to the Leos.  She described them as “basically the High School version of the Lions.  The money they raise will go into their general fund, and then later in the year, they will choose how to direct the funds. Last year the Leos were involved with the hot lunch program in Peekskill.  They provided one meal a month for the whole year. They also contributed to Heifer International.  They are involved in the Seniors’ Dinner in spring, collecting toys for the Christmas Wish program, Shredder Day, and Road Clean-ups.”  This year’s group has already decided to assist the seniors in putting up decorations around town for the holidays.
According to Carlton, the most important thing about the Leos program is that “it teaches the next generation to be providers to their community.”  Tiffany noted that although she is the adult liaison, the Leos really have to run things themselves.  They set up committees, set timelines and learn through doing, without an adult’s assistance. “I bring things to them that the Lions need help on, but they have to do everything themselves. Sometimes things fall apart, but that’s how they learn.” Carlton noted that historically the Lions have raised over $175,000 towards the Philipstown Scholarship Fund, and they have consistently been one of the largest donors towards funding the college needs of local students.  A Review Committee goes over all of the applicants thoroughly in making the awards.
The Lions are concerned about enough funds being raised this year because of the increase in other charitable endeavors conducted by the Club, in particular the Christmas Wish Program, led by Councilwoman and Lion Betty Budney.  This program aids local families who are unable to provide for their children at Christmas. Sometimes local families who are able to help are matched up with a family in need.  This year Carlton senses “an overabundance of need in the community.” The idea for the Variety Show came from Lion’s Club President, Tim Greco (also the new Pastor at the Cold Spring Baptist Church), who has been spotted at a table just outside of Foodtown several times this past week, selling tickets and talking up the event.  He is very excited about the level of talent involved, and the fact that all proceeds go directly to local students.
Garrison’s own David Lilburne will be emceeing the event.  Scheduled to appear are Katie Mussler, who has performed with Disney in Europe; Stacy Labriola; Lindy Labriola; James Rubino; Matthew Chason; Mike Klubnick; Jim Mechalakos; Rich Ferguson and his daughter; Greta Garschagen; Andy Revkin; Rose Lindbergh; Grace Ann Franz; Fred Martin; Marina Martin; Kaelin  Martin; Frankie Batignani; Fran DiSarro; Lucy Austin; Lisa Sabin, and, it is promised, “local bands, dancers, comedy, and many more great acts.”  Special guest will be Daisy Japlog— a world class violinist (check her out at  http://www.youtube.com/watch?v=HColhU3hRvg/  ) Also taking the stage will be Haldane’s The Blue Notes close singing harmony group, led by Martha Mechalakos. Special guest appearances will be made by Assemblywoman Sandy Galef (in a sketch) and the one and only Betty Budney herself!
Tickets can be obtained at the door, or you can call in advance to reserve: Betty Budney, 845-265-3508 or Melissa Carlton, 914-474-0111.

According to Lions Club President Tim Greco, The Lions Club Variety Night was a great success and will return again next year.  The Lions were able to raise just shy of $3,000 for the scholarship fund in which 100% will go to local students.